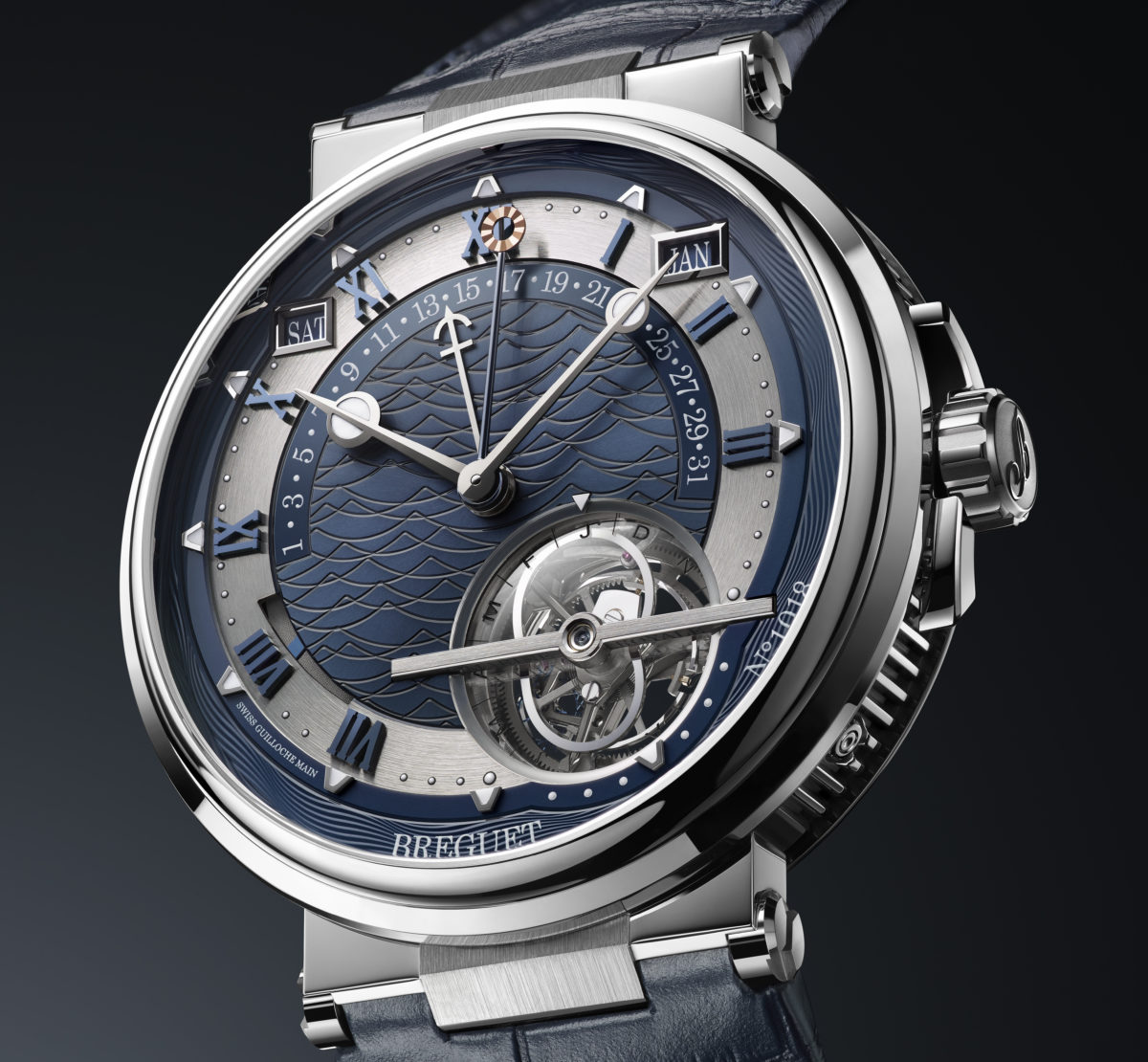 Throughout his career, A.-L. Breguet consistently demonstrated his exceptional mastery of time measurement. His strong involvement and his revolutionary developments earned him significant recognition and numerous honours. Renowned the length and breadth of Europe, Breguet found a particularly active admirer in Louis XVIII, king of France. In 1814, the latter appointed him a member of the Bureau des longitudes in Paris. This body created in 1795 by the National Convention was dedicated to the advancement of the various branches of astronomy and their applications to geography, navigation and geodesy (the measurement and understanding of Earth’s physical properties). Its tasks included the annual publication of reference documents such as astronomical ephemerides. The Bureau des longitudes was a prestigious organisation whose 20 or so members included geometers, astronomers, seafarers and associate artists. The only representative of his profession that was eminently useful to physicists and navigators, Breguet became the horological authority, notably for the calculation of longitudes at sea. As an extension of this distinction, through an ordinance issued on October 27th 1815, Louis XVIII awarded A.-L. Breguet the official title of chronometer maker to the French Royal Navy. 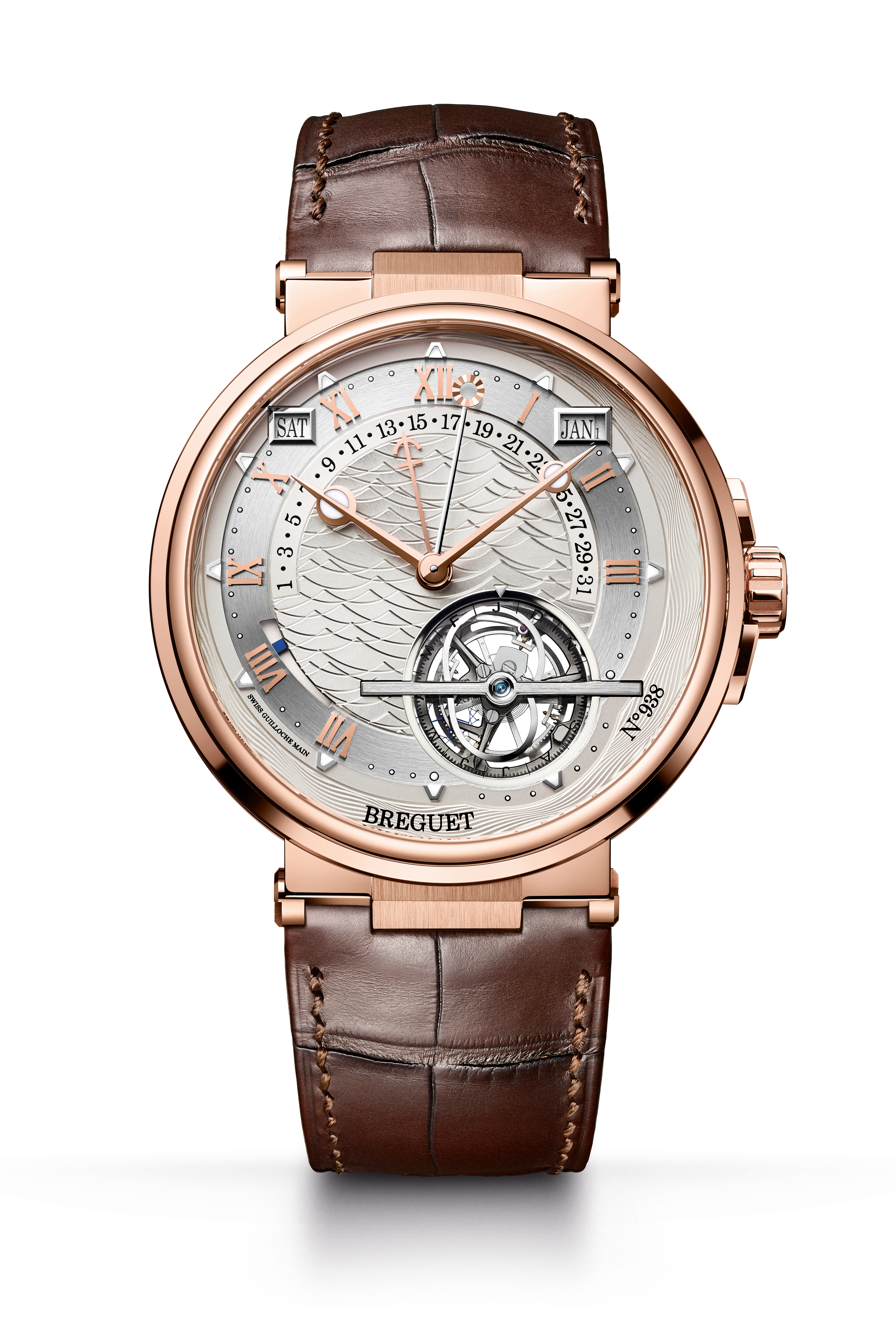 This was the most prestigious title a horologist could hope to receive, given that the very concept of marine chronometry implied scientific knowledge. It also involved playing a crucial role for the country, as marine chronometers were of capital importance for fleets by making it possible to calculate ships’ positions at sea.

Following in the wake of this unique heritage, the House of Breguet now launches a worldwide exclusive model named the Marine Équation Marchante 5887. This “Grande Complication” marks the start of a new era for the contemporary Marine collection.

The equation of time is one of the rarest and most fascinating horological complications. It serves to display the difference between mean solar time, corresponding to civil or standard hours and minutes, and true solar time, meaning the actual solar hours and minutes.

Since Antiquity, the sun has been used as the basis of time. Nonetheless, the visible motion of the sun – the true solar time indicated on sundials – is irregular. With the improvement of timekeeping precision, watches and clocks became the basis of time and true solar time was replaced by mean solar time, within which each day has the same duration of exactly 24 hours. Mean solar time may show a discrepancy with true solar time ranging from minus 16 minutes to plus 14 minutes. On just four days a year, the two times are exactly the same. Given that the sun’s various positions in the sky are reproduced in an identical manner on the same dates, watchmakers can “program” them by means of a special cam. The latter is shaped like a figure 8 and mechanically reproduces the path of the sun’s successive positions, called an analemma curve. Requiring extremely accurate execution, the cam is coupled with a feeler-spindle that drives an equation lever serving to indicate the difference between civil time and solar time (-16 to +14 minutes). This read- off is generally provided on a sector or subdial. It is then up to the user to mentally add or subtract the difference displayed in relation to mean time in order to calculate true solar time. The new Marine Équation Marchante from Breguet supersedes this principle. It simultaneously indicates civil time and true time by means of two separate minutes hands. The running solar hand, adorned with a facetted golden sun, provides a direct reading of solar time minutes that is both quicker and more user-friendly. This apparently simplicity conceals an arduous construction process that few watchmakers are capable of achieving. The solar minutes hand has to meet two imperative demands: it must sweep in a conventional way around the dial, like the civil minutes hand, while also daily moving away from the latter by a distance that varies in accordance with the analemma curve, in order to display the equation. Breguet was able to accomplish this by equipping its running solar hand with a differential gear powered by two rotation sources operating entirely independently: the rotation of civil minutes, and that controlled by the lever in contact with the equation of time cam, which makes one full turn per year. Breguet has developed an extremely slim equation cam borne by a transparent sapphire disc also serving to correct the equation of time by month.

The complexity that the running equation of time brings to this model is naturally complemented on this “Grande Complication” by a perpetual calendar. Two apertures – one between 10 and 11 o’clock and the other between 1 and 2 o’clock – respectively display the days of the week as well as the months and the leap-year cycle. The date appears inside the chapter ring by means of a retrograde hand tipped with an anchor motif and sweeping across an arc running from 9 to 3 o’clock. The dial layout of the information has been carefully designed to ensure simple and intuitive linear reading, along with impeccable visual appeal.

Based on the self-winding 581DR calibre, the new Marine Équation Marchante by Breguet also flaunts a third complication that is noteworthy in its own right: a 60-second tourbillon with a titanium carriage housing a Breguet balance with a silicon balancespring. This innovative characteristic notably enables the balance wheel to achieve a 4Hz frequency, while maintaining a particularly comfortable power reserve for a self-winding model. This 80-hour autonomy is displayed through an aperture between 7 and 9 o’clock.

The ingenuity of this spectacular model is accentuated by the precious expertise of the artisans exercising their skills within the House of Breguet. The front dial features two types of engine- turning, including a “wave” pattern specifically developed for this new creation. The inscription “Marine royale” is engraved on the tourbillon bar, whose execution naturally draws the gaze. Visible through a sapphire caseback, the bridges have been delicately chased to depict in meticulous detail the Royal Louis, a first rank vessel in the French Royal Navy. The barrel is adorned with a windrose motif, in reference to astronomical navigation. Thanks to the carefully chosen positioning of the oscillating weight on the rim of the calibre, the self-winding movement deploys the full splendour of its decoration.

A truly magnificent timepiece, the new Marine Équation Marchante by Breguet sets the tone. It features new aesthetic signature codes giving it a modern and dynamic appearance: central lugs combining polished and satin-brushed surfaces; more open fluting, with visible flanks; a crown topped with a polished “B” against a sandblasted background; as well as a crown adorned with a chamfered and satin-brushed wave motif. This “Grande Complication” comes with a 43.9mm-diameter case in rose gold or platinum. The rose gold version frames a silvered dial and an anthracite movement, while the platinum interpretation has a blue dial and a rhodium-plated movement. Elegance, legibility and aesthetic balance are the keynote features of these two equally sumptuous models. 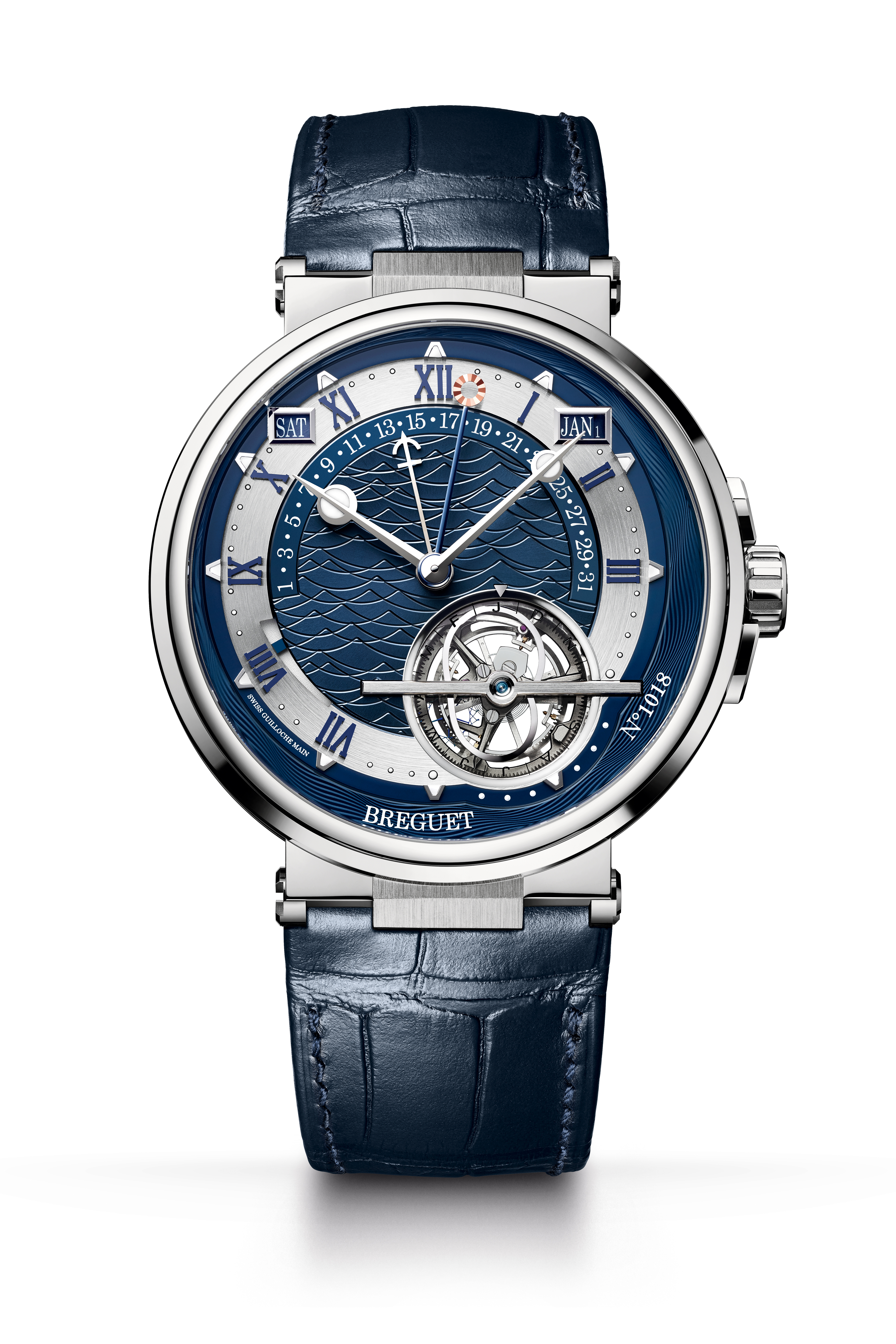 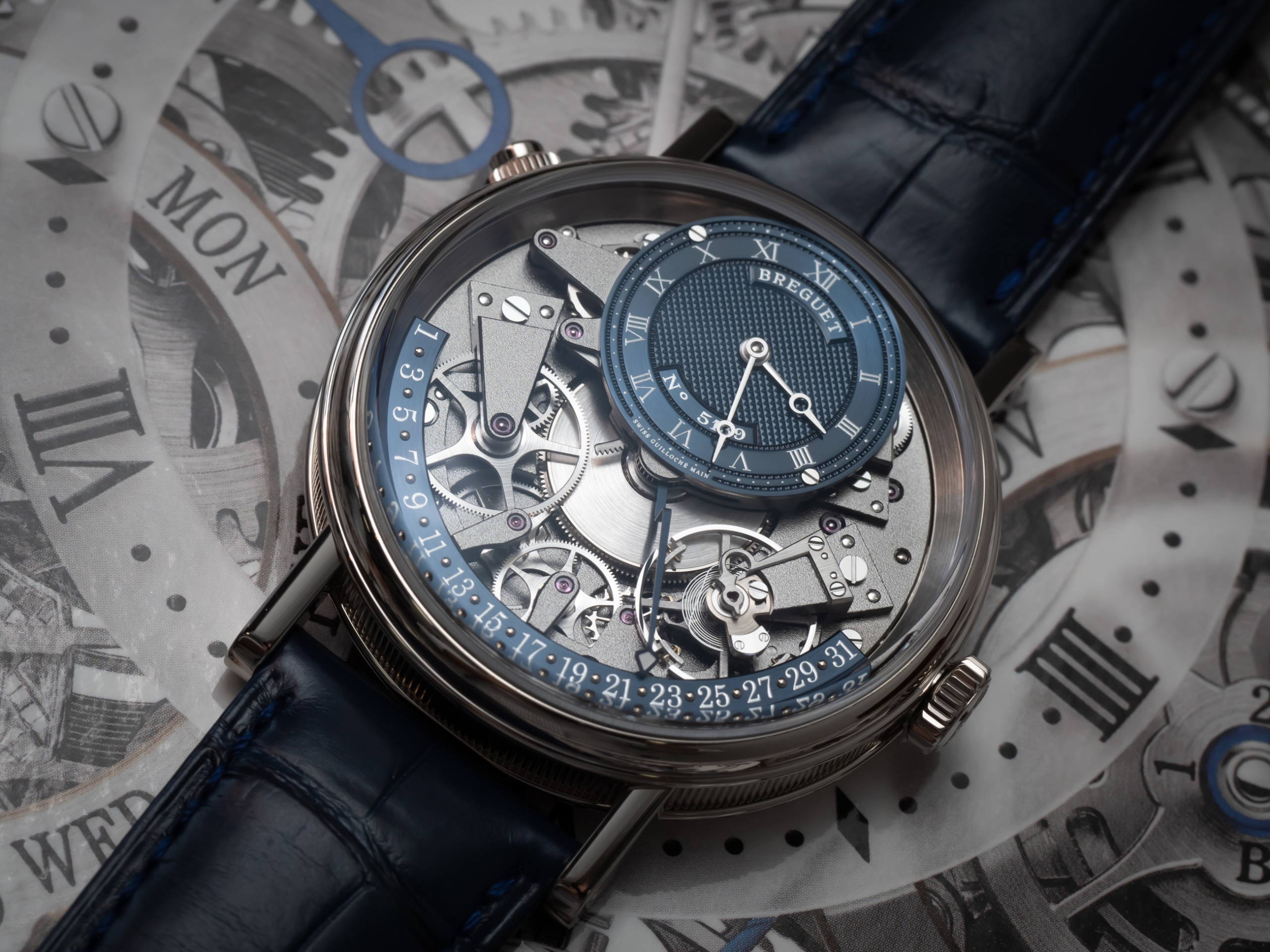 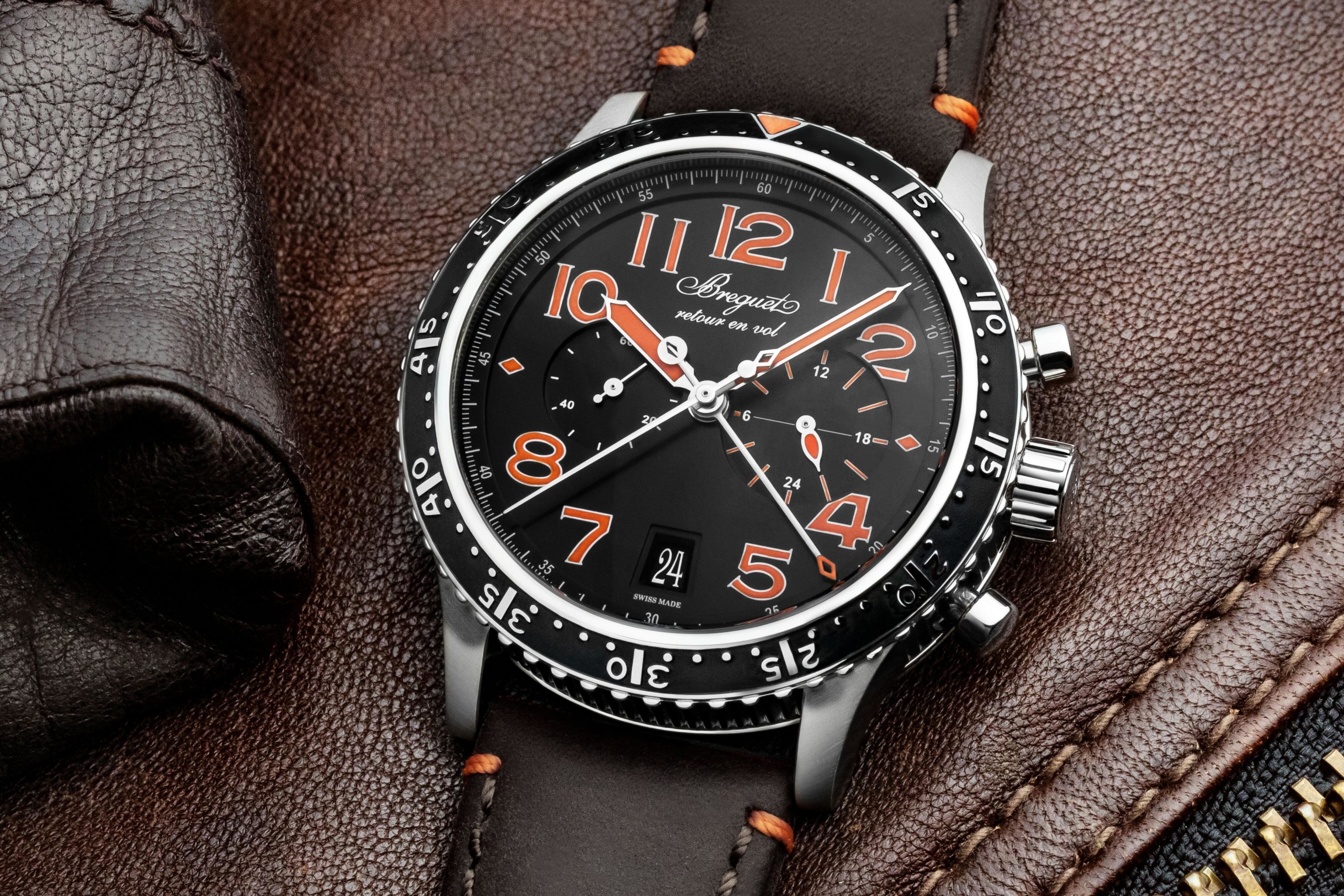