With its all-titanium case and bright blue detailing, the Chronomètre FERDINAND BERTHOUD FB 1.4 ushers Chronométrie FERDINAND BERTHOUD firmly into the modern era. This demanding and technical metal transfigures a timepiece already exceptional by the quality of its construction, its craftmanship and its complications. Interpreted in two versions, with a black or silver-toned dial swept over by blued hands, this certified chronometer is a lighter version of the Chronomètre FERDINAND BERTHOUD FB 1. Its lightness and its modernity are further reinforced by the choice of chamfered sapphire bridges for its FB-T.FC-2 calibre. Their transparency enables the gaze to plunge into the depths of the entirely rhodium-plated movement, while ensuring smooth visual integration with the titanium case colour.

Like the three previous editions of the Chronomètre FERDINAND BERTHOUD FB 1, its movement is endowed with horological complications inspired by Ferdinand Berthoud’s 18th century marine chronometers representing authentic scientific instruments in their own right. The philosophy guiding Chronométrie FERDINAND BERTHOUD cannot be summed up as a mere tribute, a reproduction or even a reinterpretation. It is far more demanding and involves translating into contemporary watchmaking language the quest for excellence pursued by the master watchmaker who received the title of official Clockmaker and Mechanic by appointment to the French King and Navy. An extremely rare Fine Watchmaking timepiece, the Chronomètre FERDINAND BERTHOUD FB 1.4 is designed as a complete work of horology, available only through the Chronométrie’s highly exclusive retail network.

The different versions of the Chronomètre FERDINAND BERTHOUD FB 1 stem from an innovative horological approach. Its design, its movements, its finishing and everything composing this chronometer with tourbillon and constant force are entirely specific and testify to an uncompromising determination to achieve excellence. Chronométrie FERDINAND BERTHOUD represents the outcome of an extremely special and passion-driven approach that breathed life and soul into this project. Chronométrie FERDINAND BERTHOUD’s President, Karl-Friedrich Scheufele, has patiently built up a large collection of objects relating to time measurement since 2006 and housed in the L.U.CEUM museum in Fleurier, including a number of remarkable works by Ferdinand Berthoud.

A philosophical approach
Fired by respect and admiration for Ferdinand Berthoud, a native of the Val-de-Travers region who went on to become a horologist, inventor and talented author, Karl-Friedrich Scheufele set up a dedicated team committed to offering connoisseurs the kind of chronometers that Ferdinand Berthoud might have created himself if he were still alive. To support this approach, a specific development process was also put in place. The Chronomètres FERDINAND BERTHOUD comprise a wealth of aesthetic and technical details calling for authentic expertise and substantial expertise.In the case of the Chronomètre FERDINAND BERTHOUD FB 1.4, this process is even more directly inspired by the modus operandi adopted by Ferdinand Berthoud. It was indeed after consulting clients with regard to their expectations that the decision was taken to offer a Chronomètre FERDINAND BERTHOUD FB 1 with a more contemporary look and material. This timepiece will be produced in two numbered limited editions of 20 each– a highly symbolic number closely bound up with the history of Ferdinand Berthoud.

In 1770, he was awarded the warrant of Clockmaker and Mechanic by appointment to the French King and Navy. He was thus put in charge of inspecting the construction of the timepieces equipping the Royal Navy and received an order for 20 marine clocks (generally known as marine chronometers). The security and efficiency of the fleet depended on the precision of these instruments. In that era, the measurement of time was the only means of determining a ship’s longitude and thus its position at sea.

An evolving case design
The FERDINAND BERTHOUD FB 1.4 Chronometer adds modern details to the aesthetic and technical characteristics of the previous versions, respectively crafted in 18-carat white gold (FB 1.1), in 18-carat rose gold (FB 1.2), and in 950 platinum (FB 1.3). It is a 44 mm-diameter watch, measuring less than 13 mm thick, whose case ensures a natural and comfortable fit on the wrist. Composed of a grade 5 titanium cylinder housing the movement, it comprises two octagonal-shaped sidepieces in polished titanium that contribute to its distinctive shape. The grade 2 titanium lugs are secured to the case middle by two stylised blackened titanium bolts, marking the start of the hand-stitched double-sided alligator leather strap. 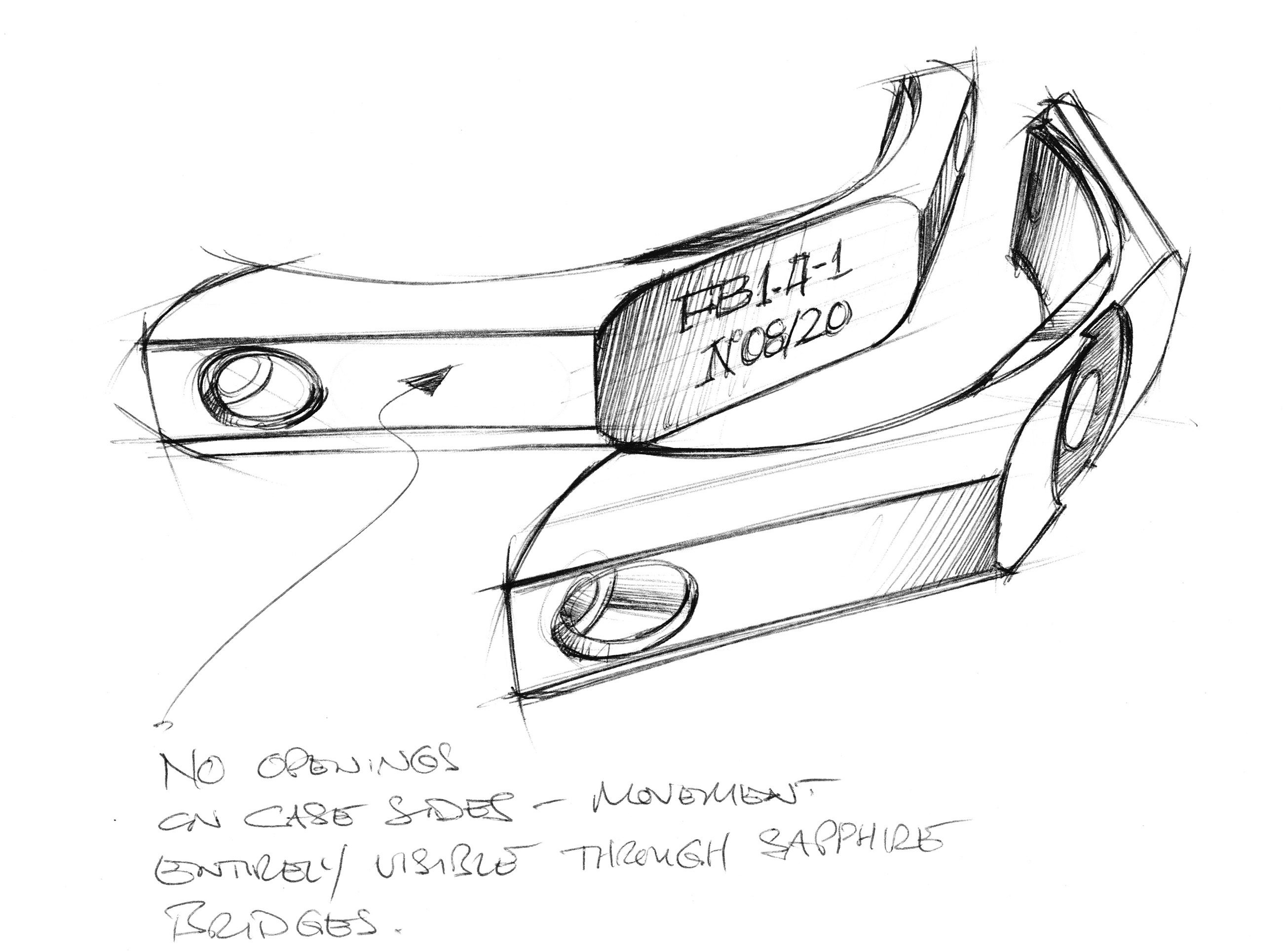 For the first time, however, its sides are not pierced with four portholes. The view of Calibre FB-T.FC-2 has been shifted to the back. The light floods into the very depths of the mechanism, since the nickel silver bridges have been replaced by three sapphire half-bridges. Their exceptional rigidity enables them to play this structural role. Their transparency reveals the entire movement, particularly the fusee-and-chain transmission system, as well as affording a first ever view of the polished power-reserve cone.

Grey, black and blue
The dial of the FERDINAND BERTHOUD FB 1.4 Chronometer is made of black galvanised frosted brass, in the FB 1.4-1 version, or vertical satin-brushed silver-toned brass for the FB 1.4-2 interpretation. Another dial opening reveals the tourbillon carriage driving wheel and the seconds wheel, both delicately blued. The extremely long and slender blued bronze seconds hand is fitted at the centre, an unusual position on a tourbillon model. 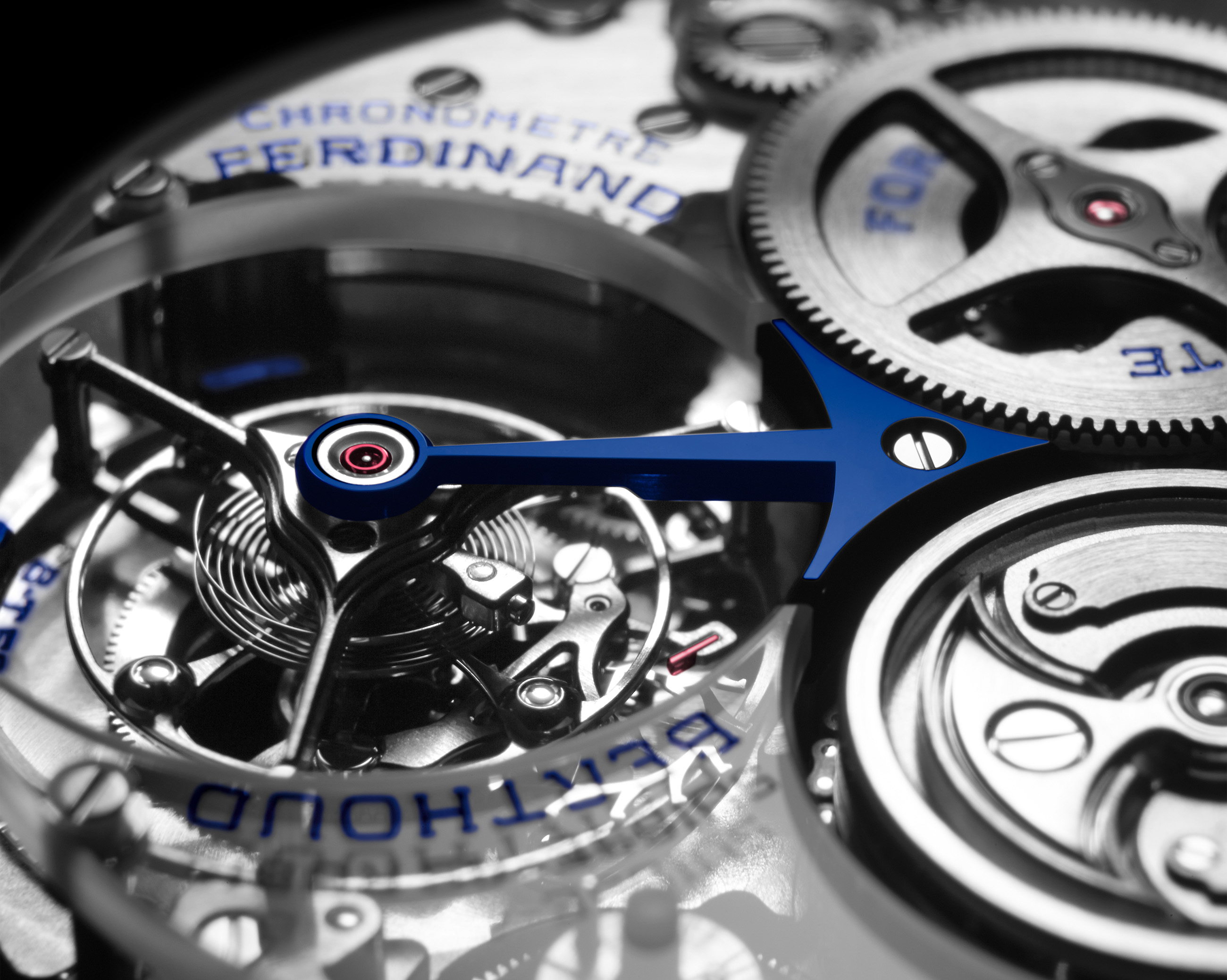 The hours and minutes appear in an offset 12 o’clock subdial, punctuated by Arabic numerals combined with cut-out hands in white gold, or blued gold for the FB 1.4-3 version. The nature and provenance of the FERDINAND BERTHOUD FB 1.4 Chronometer can also be read off on this large dial, engraved with the inscription “Chronomètre Val-de-Travers Suisse”. More than merely representing a signature or an appellation of origin, it proudly proclaims the watch’s identity.

A characteristic pillar-type structure
Calibre FB-T.FC-2 is built according to an architectural concept unique in the field of contemporary watchmaking. This hand-wound movement features 15 nickel silver bridges and three sapphire half-bridges framed by polished titanium pillars surrounding the mechanical organs. This construction is typical of 18th century marine chronometers. 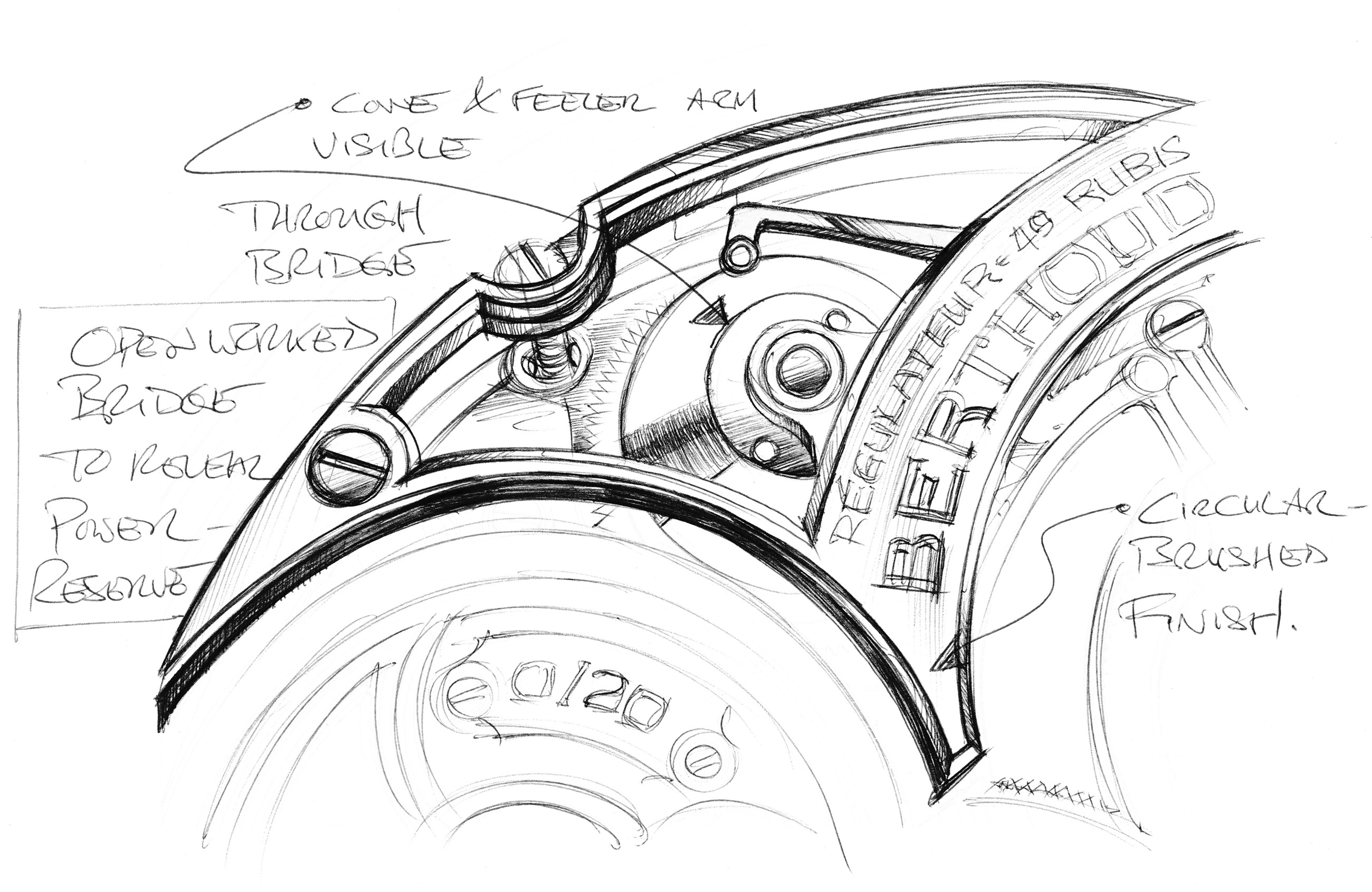 Equalising torque
This movement is one of the rare examples to feature fusee-and-chain transmission, the oldest historical solution developed to ensure constant force for the escapement. This system acts like an automatic gear box, with the amount of torque delivered to the barrel varying according to the level of winding. When the movement is fully wound (53 hours of power reserve), the chain is entirely coiled around the small end of the fusee and the barrel spring is at maximum power. This force dwindles in the course of time, as the chain coils around the drum, moving from the small to the large end of the spindle-shaped fusee. The variation in the diameter of the fusee compensates for the reduction of the mainspring torque. The escapement thus receives constant energy, thereby equalling out the amplitude of the balance wheel and thereby enhancing the movement’s timekeeping precision. 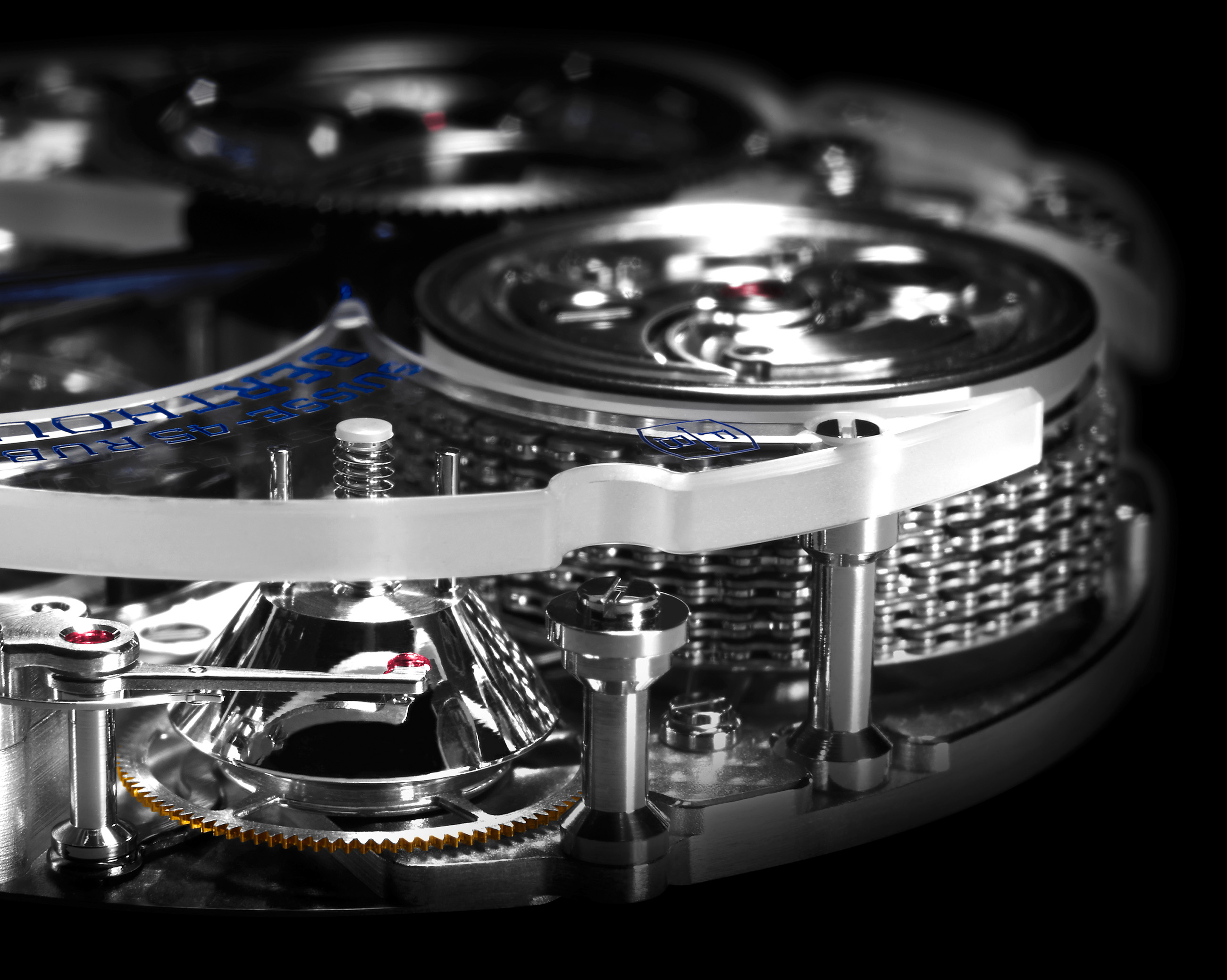 Slim and light
The distinctive nature of the FB-T.FC-2 lies in the fact that its barrel and fusee are reversed, upside down, and above all suspended – meaning they are held on one side only. This helps save a few precious millimetres and contributes to the overall slimness of the calibre. At just 7.96 mm thick, the movement powering the Chronomètre FERDINAND BERTHOUD FB 1.4. is the thinnest in its category.

In parallel, the decision to clothe it titanium makes the FERDINAND BERTHOUD FB 1.4 Chronometer exceptionally light. The watch, including its strap and titanium buckle, weighs just 80 grams, which is truly outstanding for a such a substantial timepiece. Wearer comfort is indeed enhanced by this reduced weight.

Safeguarding the movement
When the mainspring is associated with a fusee, the barrel drum turns in one direction while the spring is unwinding, and in the other during winding, thus serving to coil the chain. During the winding of this type of mechanism, the movement generally stops running. To counteract this effect, the FB-T.FC-2 calibre is equipped with a distinctively designed differential gear, for which a patent has been filed. It enables the balance-wheel to continue oscillating even during winding and thus preserves the movement’s precision timekeeping properties. 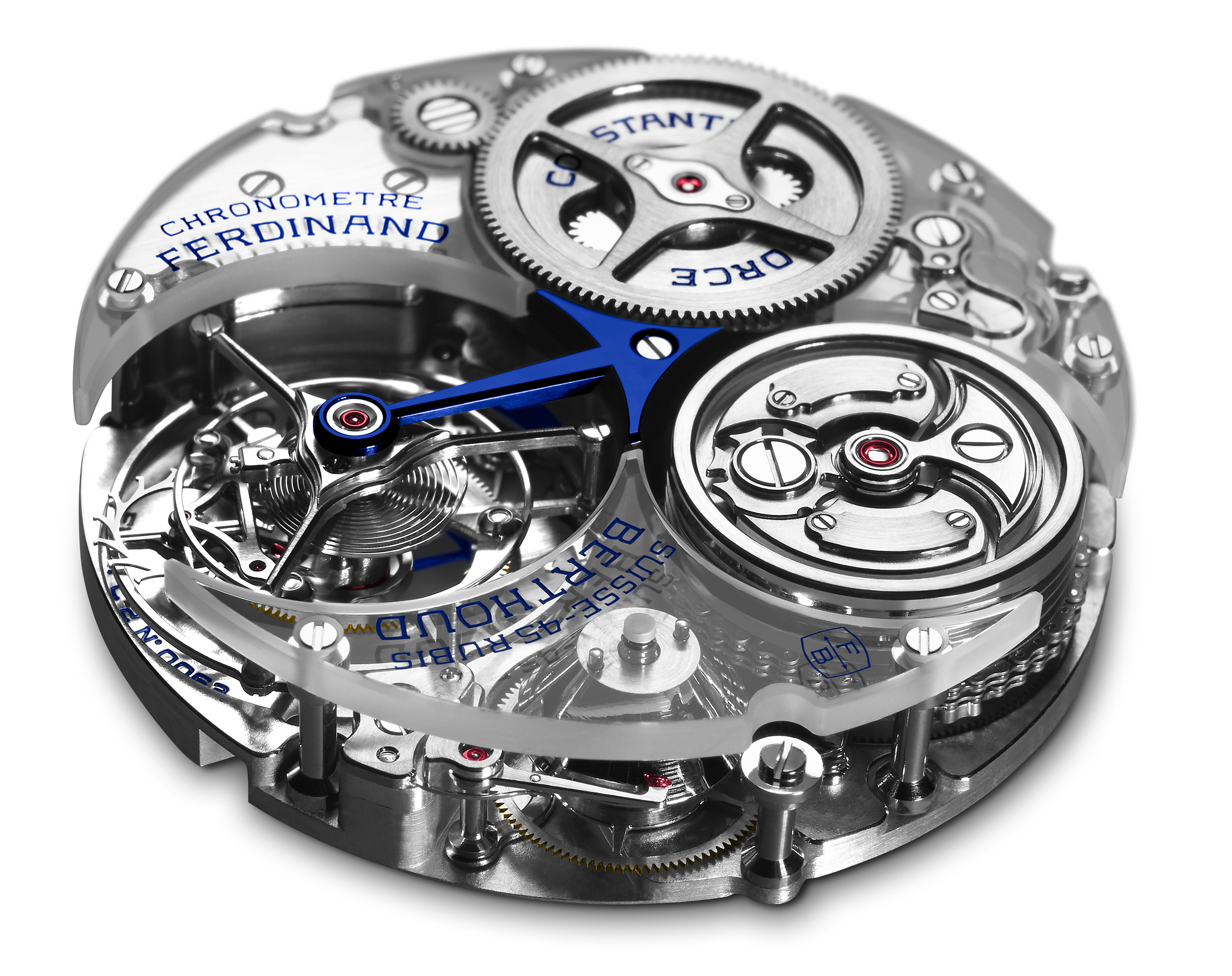 The winding mechanism fitted with a pinion featuring cone-shaped toothing, together with a large-diameter knurled crown, enables smooth winding of the movement – a gentle motion that naturally enhances the quality of the rapport established between the watch and its owner, which plays an essential role in the case of a hand-wound watch.

To perfect the security of the movement, the engineers at Chronométrie FERDINAND BERTHOUD have endowed the crown with a dynamometric function serving to avoid any damage to the movement that might be caused by excessive winding.

Suspended mobile power-reserve cone
A patent has already been filed for the highly sophisticated power-reserve indication device A truncated cone moves up and down along an arbor connected to the barrel. This suspended cone is topped by a feeler spindle in the form of a mobile arm tipped with a watch jewel. Its position on the cone reflects the state of wind. This feeler spindle is in turn connected to the hand on the power-reserve display, which features blued graduations engraved on the baseplate and visible through a dial opening. For the first time, this ultra-rare device and its exceptional finshing are perfectly visible through the sapphire half-bridges.

Tourbillon with central seconds
Teamed with the seconds wheel and pinion, the tourbillon of Calibre FB-T.FC-2 comprises 67 components assembled within a titanium carriage measuring 16.55 mm in diameter, and fixed to a blued arrow-shaped steel arch. A large variable-inertia balance-wheel is regulated and balanced by four rhodium-plated nickel silver inertia-blocks. It is coupled with a self-compensating regulating balance-spring in a stainless alloy, featuring a Phillips outer terminal curve (overcoil) manually shaped by the expert hands of the women serving as balance-spring fitters at Chronométrie FERDINAND BERTHOUD.

To poise the escapement’s unbalance, two blued 18-carat gold inertia-blocks ensure the uniformity of the weights of this large-size tourbillon. This tourbillon contributes to earning Calibre FB-T.FC-2 its chronometer title awarded by the Swiss Official Chronometer Testing Institute (COSC).

Noble materials
Within the traditional approach to watchmaking, construction and mechanical structure are inseparable from the choice of materials and the quality of the finishing. In this respect, the movement of the Chronomètre FERDINAND BERTHOUD FB 1.4 is in a league of its own. The mainplate and the intermediate bridges of Calibre FB-T.FC-2 are made of rhodium-plated nickel silver.

The sapphire half-bridges meet another type of demand. Corundum crystal is distinguished by its extreme properties. Its hardness is exceeded only by that of diamond. Cutting the three bridges, giving them the shape and the required drill-holes, finely chamfering their circumference, calls for ultra high-tech machining. The same goes for their engravings, which are then blued. Finally, although titanium is not officially classified as a precious metal, it is nonetheless truly noble. While its extreme hardness makes it very difficult to machine and polish, the surface of the Chronomètre FERDINAND BERTHOUD FB 1.4 is nonetheless impeccably shiny.

Noble skills
Whatever their position and their function, these component finishing operations are entirely done by hand using traditional tools, in the workshops of Chronométrie FERDINAND BERTHOUD. The quality control of this finishing is performed at a far higher degree of magnification than usual, under a 6x loupe. Under such intense scrutiny, no detail, however tiny, goes unnoticed. No error, imperfection or insufficiency is tolerated. Such is the horological excellence cultivated by Chronométrie FERDINAND BERTHOUD as part of its unfailing commitment to precision for explorers.

This respect for watchmaking tradition, expressed in resolutely modern terms through the Chronomètres FERDINAND BERTHOUD, will remain the core of future developments from the Maison. 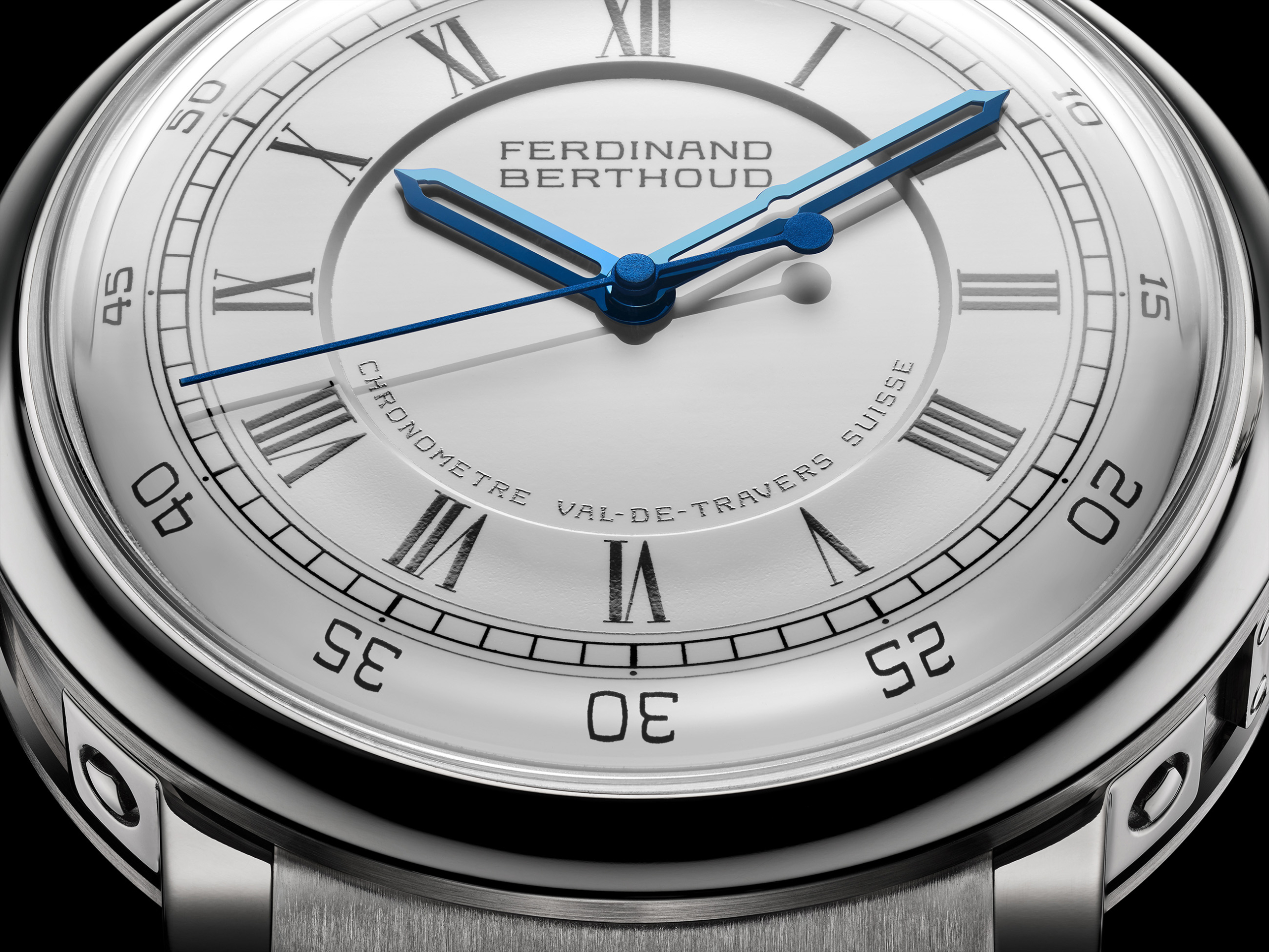 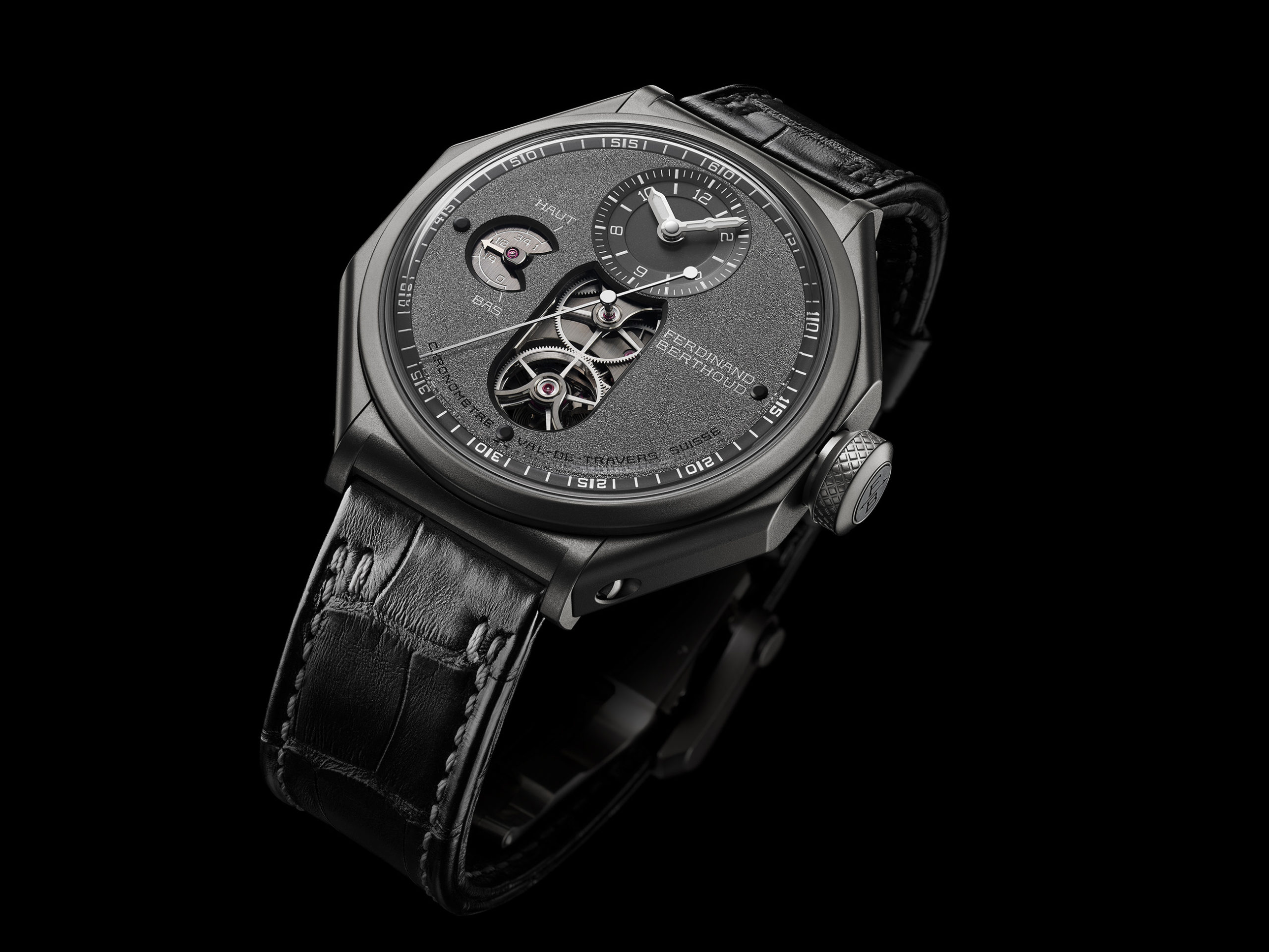