The Bell & Ross “Vintage Bellytanker” is a testament to discrete elegance and style.

Speed has always been a key source of inspiration for Bell & Ross. Since it was founded, the watch brand has also demonstrated a passion for the very latest technology. These factors constantly push the brand to excel and to develop highly complex mechanisms for its watches. By extension, Bell & Ross is interested in all extreme machines. So is the Bell & Ross “Vintage Bellytanker”. 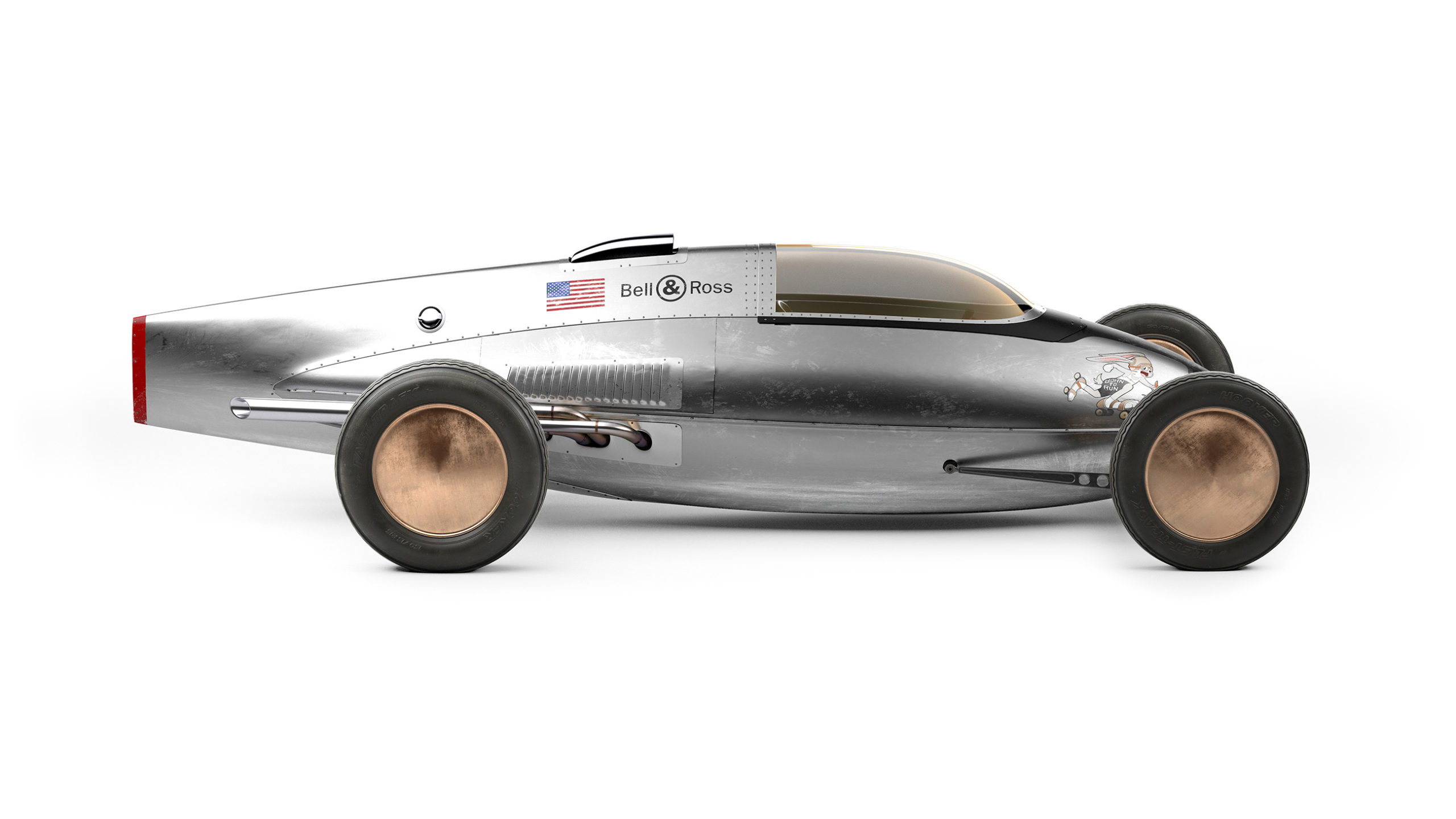 In 2014, Bell & Ross developed the B-Rocket, a retro-futuristic concept motorcycle, streamlined like a jet plane. This two-wheeled wonder pays tribute to the very nest experimental aircrafts produced by the US aviation industry in the fifties and sixties. 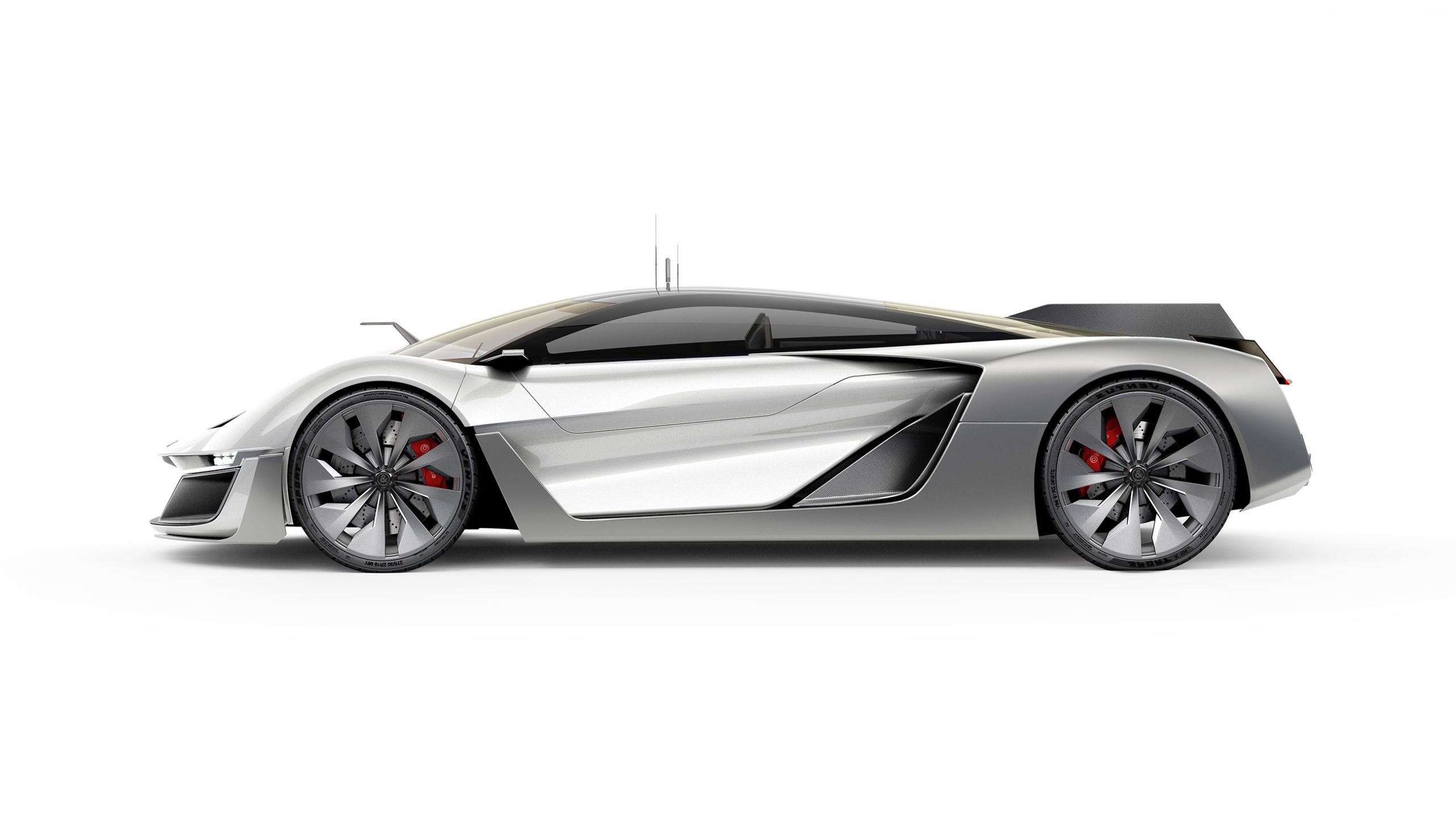 In 2016, the brand took the same approach with the Aero GT. The watchmaker created an avant-garde aircraft-inspired supercar, with astonishing performances.

Bell & Ross has returned to its passion for engineering, creating its retro-influenced Bellytanker racecar, with missile-like aerodynamics. It is built using a fuel tank from a fighter plane. Fitted with an engine and four wheels, this tank is transformed into a streamlined racer. The Bellytanker is best known for taking part in speed trials on the huge salt lake ats of the North American West. These gigantic open stretches of desert, where most of the water has evaporated, are particularly well suited to motor racing competitions. The Bonneville Salt Flats in Utah are the most famous example. 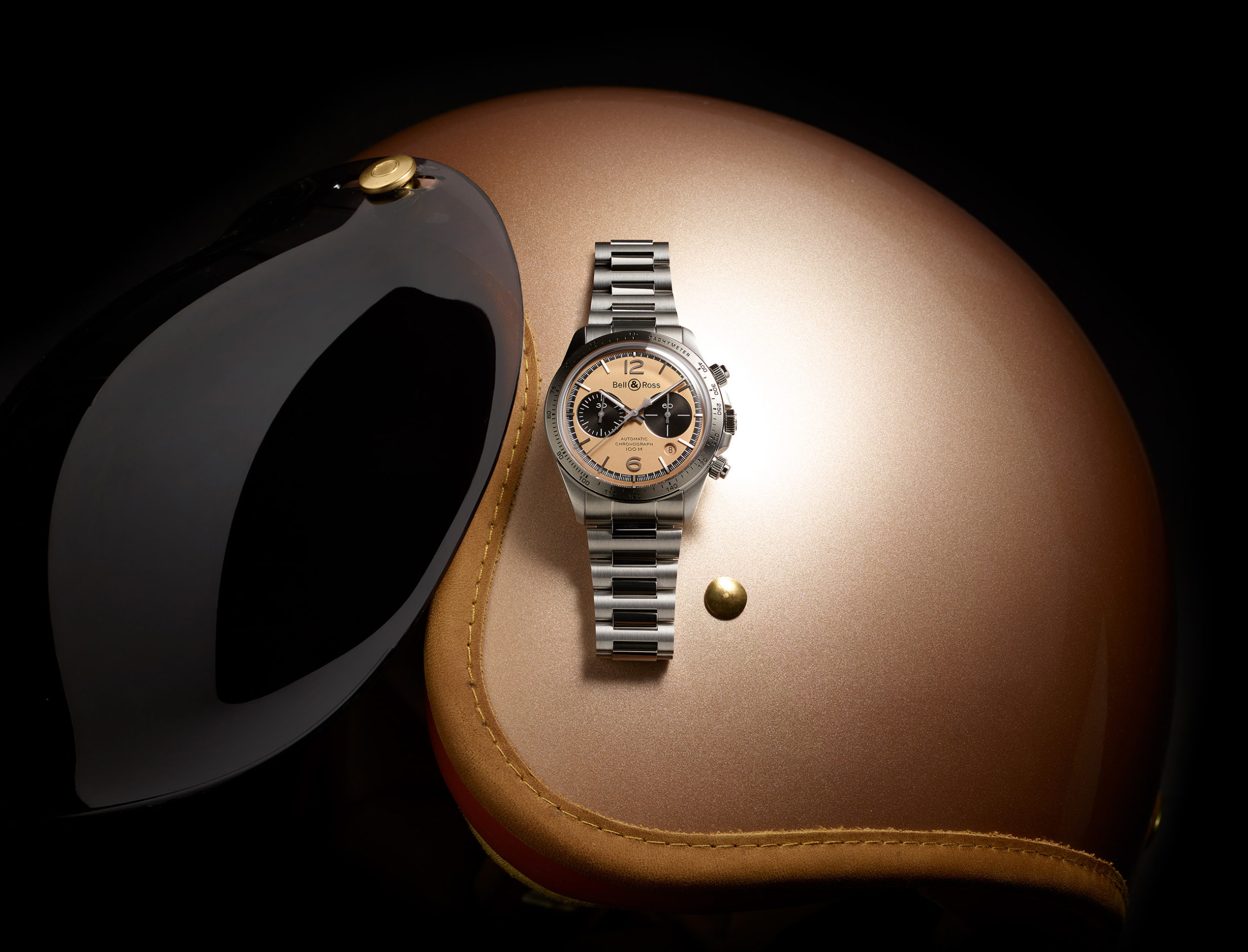 Originating in the forties and fifties, the term «Bellytank» initially referred to the emergency drop tank fitted in the belly of fighter planes. «Bellytanker» is now mainly used for the high-speed race cars manufactured directly from these spare tanks.

Their history dates back to the end of the war. Bill Burke, an American speed freak, wanted to build an ultra-fast car to take part in the races being held on the salt ats. He had fought in the South Pacific, and had grown to love the elegance of these fighter plane drop tanks, with their aerodynamic lines as if sculpted by the wind. To his eyes, they looked like the perfect foundations on which to build his speed machine. He was not wrong: their droplet shape ensured exceptional performance. At the end of the war many military components were sold off cheap. In 1946, he bought a drop tank from a North American P-51 Mustang for $35. He used it to build a bright yellow mini hot-rod.

He fitted the tank that formed the bodywork, on a chassis, powering it with a powerful V8 engine. Then took his prototype to the Bonneville salt lake races to test it.

Without realizing it, he had created the world’s first Bellytanker. The shape and design of this aerodynamic vehicle have ensured its place in the great aeronautical history of North America in the forties and fifties. It is also enshrined in the annals of motor racing with the Hot Rod and the Streamliner. In the automotive world, it also rapidly acquired iconic status. 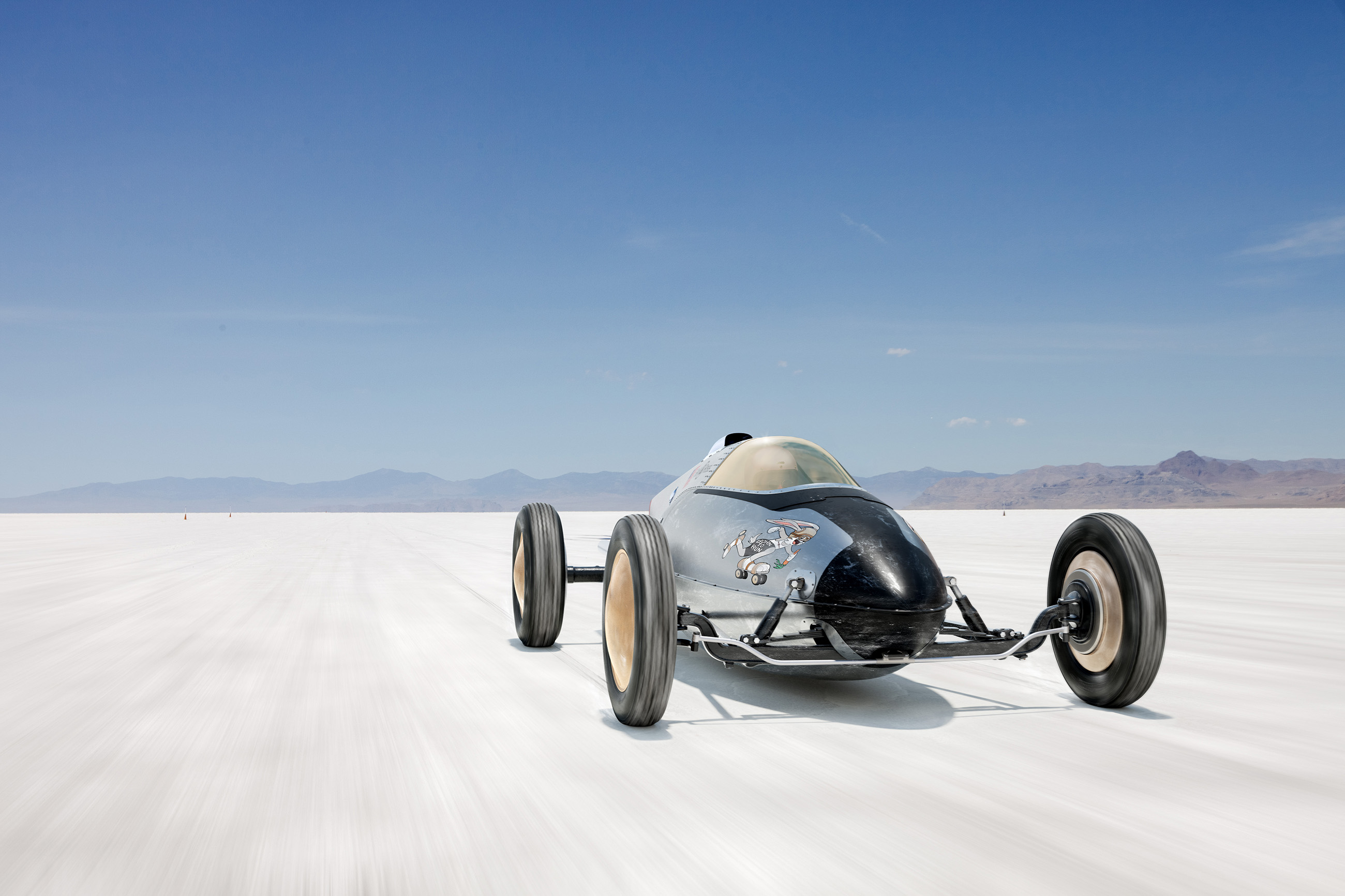 A NEW RACER AT BELL & ROSS

Bill Burke went on to develop vehicles based on tanks from a lighter plane, the Lockheed P-38 fighter.

Bell & Ross has designed its own vehicle, taking these later versions of the Bellytanker as its inspiration. Being part of a plane on wheels, this new vehicle is perfectly aligned with the spirit of the watch brand, which has aviation and the military in its DNA. This retro-futuristic racer is the latest in a line of extreme machines developed by the firm. It combines both aeronautical influences and numerous nods to the watchmaking world. So, the metal of its bodywork is like the case of a watch. The glass covering its cockpit echoes an ultra-curved crystal. The copper-cultured trim evokes the dials of timepieces from this era. Its tail, designed to stabilize the vehicle, is a reference to the aviation codes, as is the matte black of its “nose”. This color is used on certain stealth fighters to avoid reflections.

Self-winding with three hands; it displays the hours, minutes and seconds. The date is at 4.30. This classic version is designed for the purist.

The small 38.5 mm case in brushed steel harks back to the watches of the forties and fifties, with a nod to the cockpit of the P-51 Mustang. Flat and thin, it imbues the watch with elegance. The solid case back features an engraved pro le of the Bellytanker. Lastly, the ultra-curved sapphire crystal, with its vintage overtones, recalls the round windows in classic plane cockpits.

The color scheme matches the Bell & Ross racer. Metallic copper of the dial echoes the color of its wheel rims. Same black seen on the details of the minute track recalls the car’s nose. Finally, the steel used for the case, numerals, indices and hands pays tribute to its sculpted bodywork. A metal indices and numerals are appliques. The metal skeleton hands are filled with Superluminova, so that they remain visible at night. The aircraft-shaped counterweight on the seconds’ hand is one of the new Bell & Ross stylistic signatures.

Exceedingly soft and supple, this dark brown leather strap is aged for a vintage look.

The chronograph, invented to measure short periods of time, is a key motor racing function. This variant houses a chronograph with two counters: a 30-minute counter at 9 o’clock and a central 60-second counter. The date sits between 4 and 5 o’clock.

Satin-finished polished steel of this larger 41 mm case hints at the P-51 Mustang’s tanks. The sapphire case-back allows glimpses of the chronograph mechanism’s gear train. A version with a solid case back features an engraved pro le of the B&R Bellytanker. The crown and push buttons are screw-down for improved water-resistance. A fixed bezel features a tachymeter scale, enabling the speed of a racecar to be calculated at any time.

This style is known as a «Panda» dial, so-called because of the contrast between the black counters and gold dial. The color scheme used matches that of the Bellytanker. A metallic copper of the dial echoes the color of the racer’s wheel rims. The black of the detailed line on the minute track is also found on the car’s nose. Finally, the steel used for the case, numerals, indices and hands is a nod to the vehicle’s sculpted bodywork. Metal indices and numerals are appliques. The metal skeleton hands are filled with Superluminova, so that they remain visible at night. The aircraft-shaped counterweight on the second’s hand is one of the new Bell & Ross stylistic signatures.

There are two options:
– Retro-inspired dark brown leather, which is exceedingly soft and supple.
– A very sporty metal bracelet, ensuring this chronograph is a pleasure to wear. 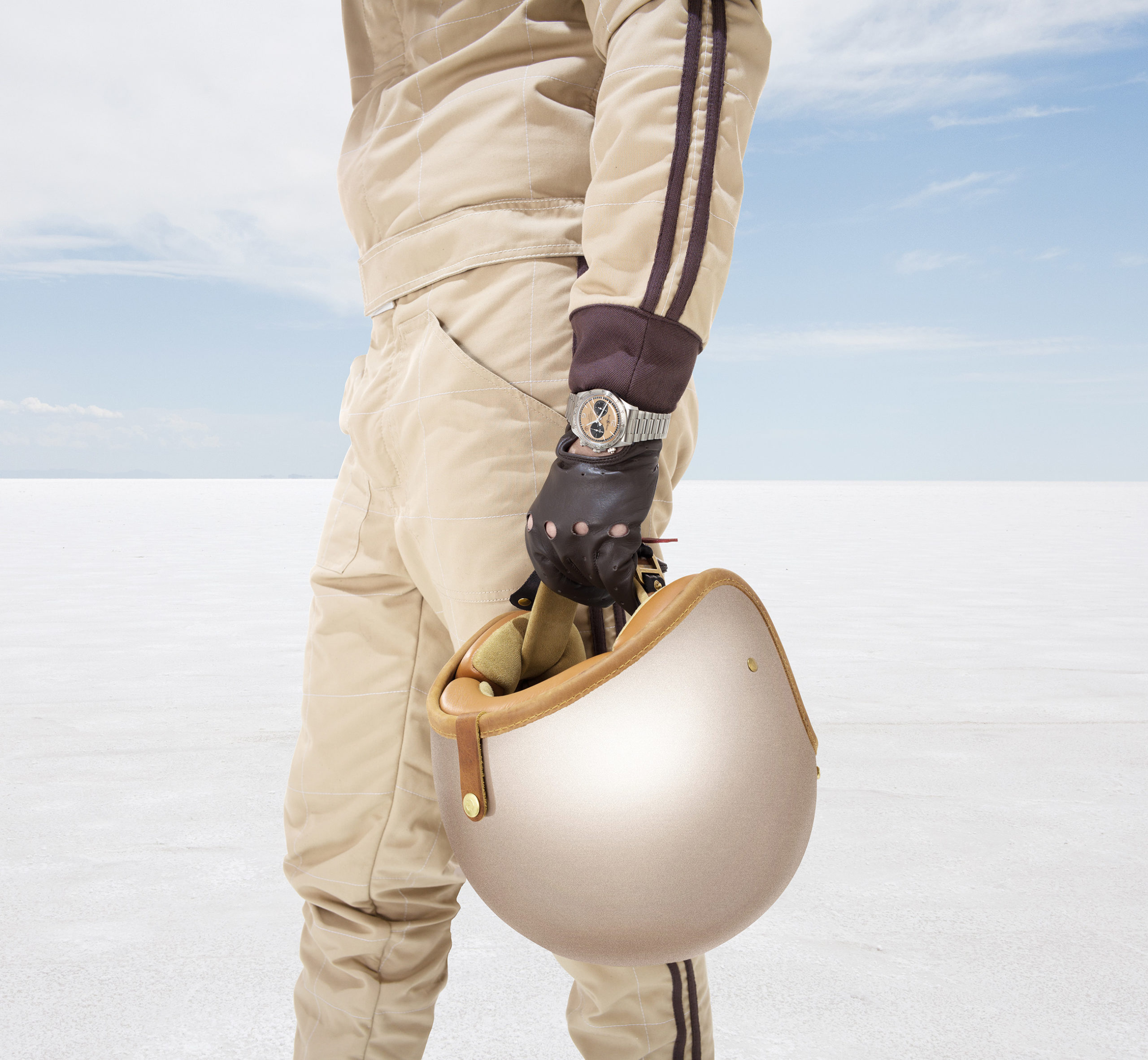 Bell & Ross loves to take its passion for extreme machines to the limits. Its new Bellytanker car naturally continues the line of vehicles that precede it: the B-Rocket motorbike and the Aero GT supercar.

Comprised of two timepieces, the new Bell & Ross “Vintage Bellytanker” collection adopts the round case of the Vintage model, whilst remaining resolutely modern. It is designed to evoke the legendary era of record-breaking races in the North America of the fifties. Participants sped across the salt lakes, most notably at Bonneville, in their super-fast homemade hot rods. This collection is aimed at contemporary and enthusiastic drivers, with a love for vintage. 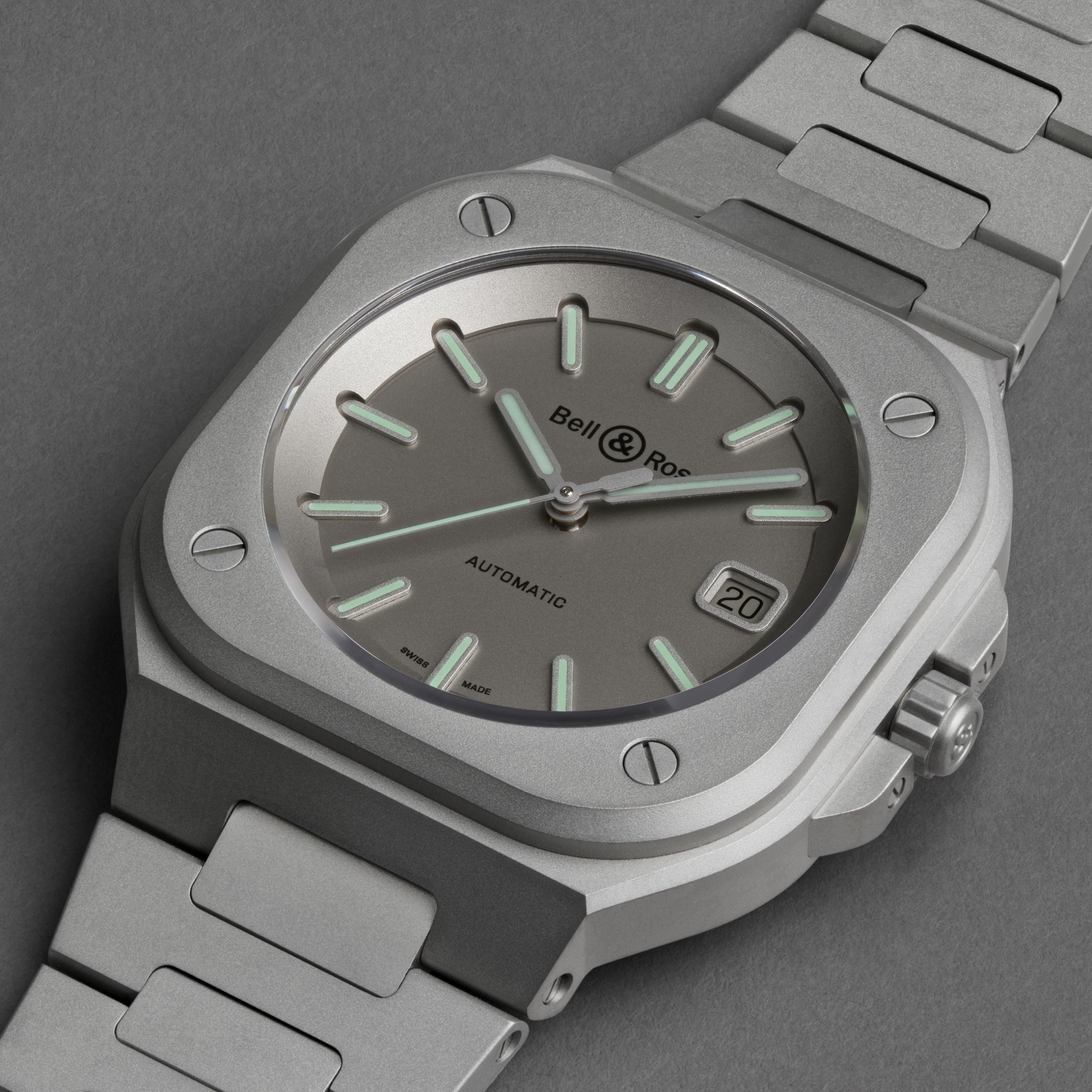 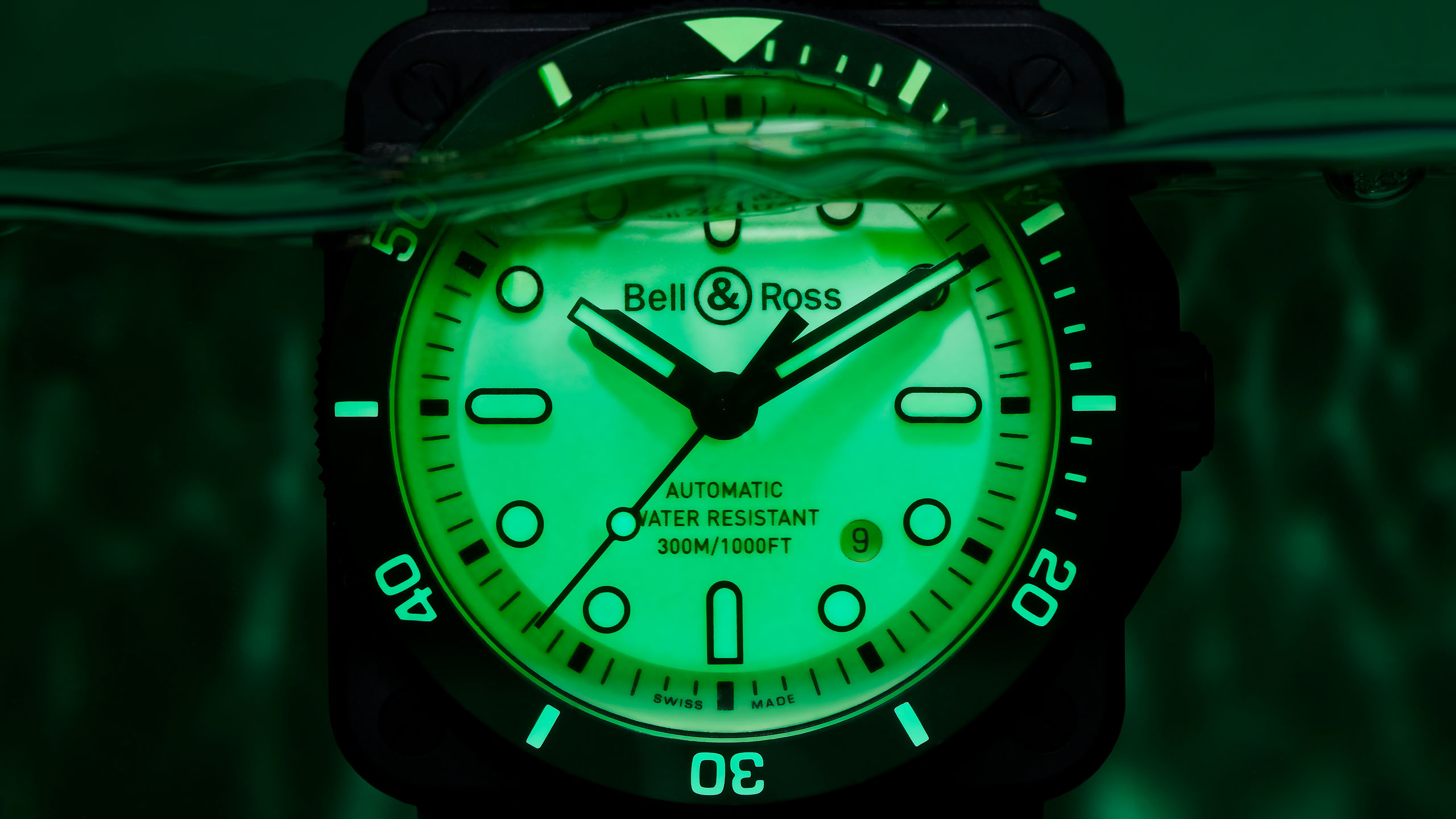 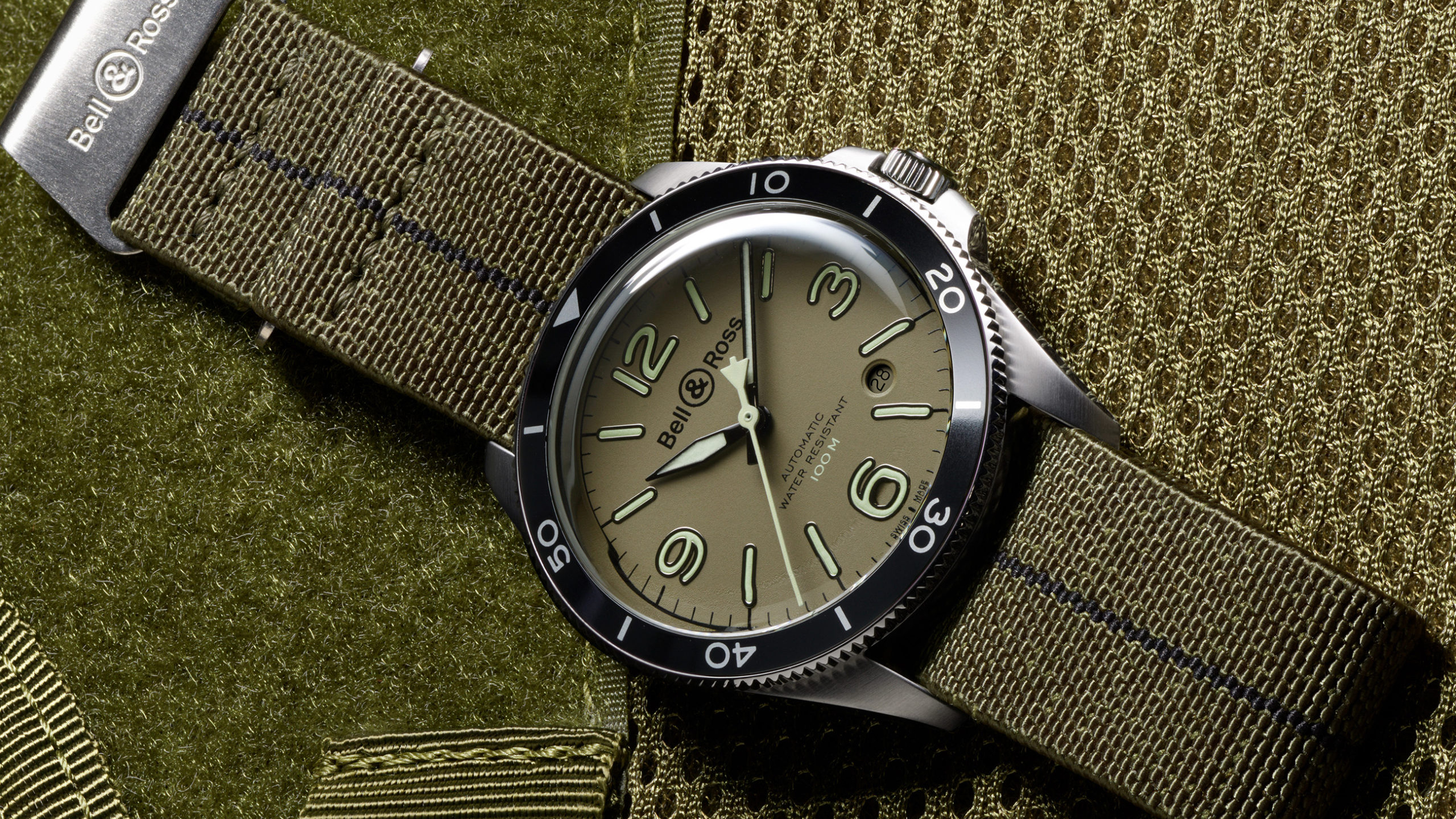