The essence of MB&F. The spirit of Can-Am

Over the last decade, two indelible forms have often marked MB&F’s Horological Machines: the distinctive angular form and optical prism displays of the revisited 1970s Amida watch, which first manifested in HM5 and then HMX; and the now signature “battle-axe” winding rotor, which took centre stage on top of HM3, MB&F’s most popular model to date. Welcome the MB&F Horological Machine N°8 CAN-AM. 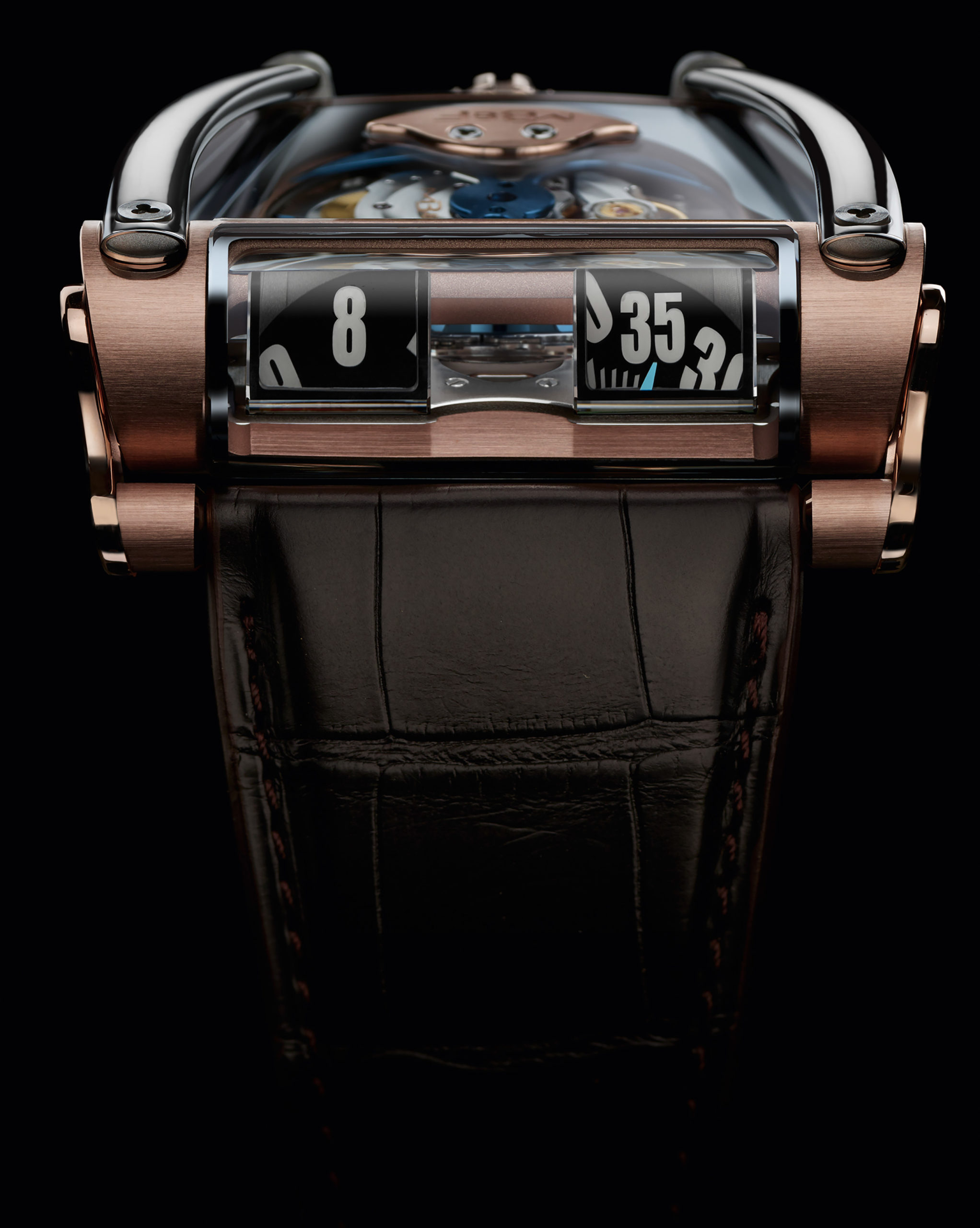 The Canadian-American Challenge Cup, Can-Am for short, was a sports car racing series running from 1966 to 1987. Bruce McLaren developed his very first car for the Can-Am series; McLaren, Lola, Chaparral, BRM, Shadow and Porsche all ran manufacture teams. Class restrictions in the Can-Am were minimal and allowed for unlimited engine sizes, turbocharging, supercharging, and basically unrestricted aerodynamics. This all led to the development of pioneering technology in many fields. And extremely powerful engines. 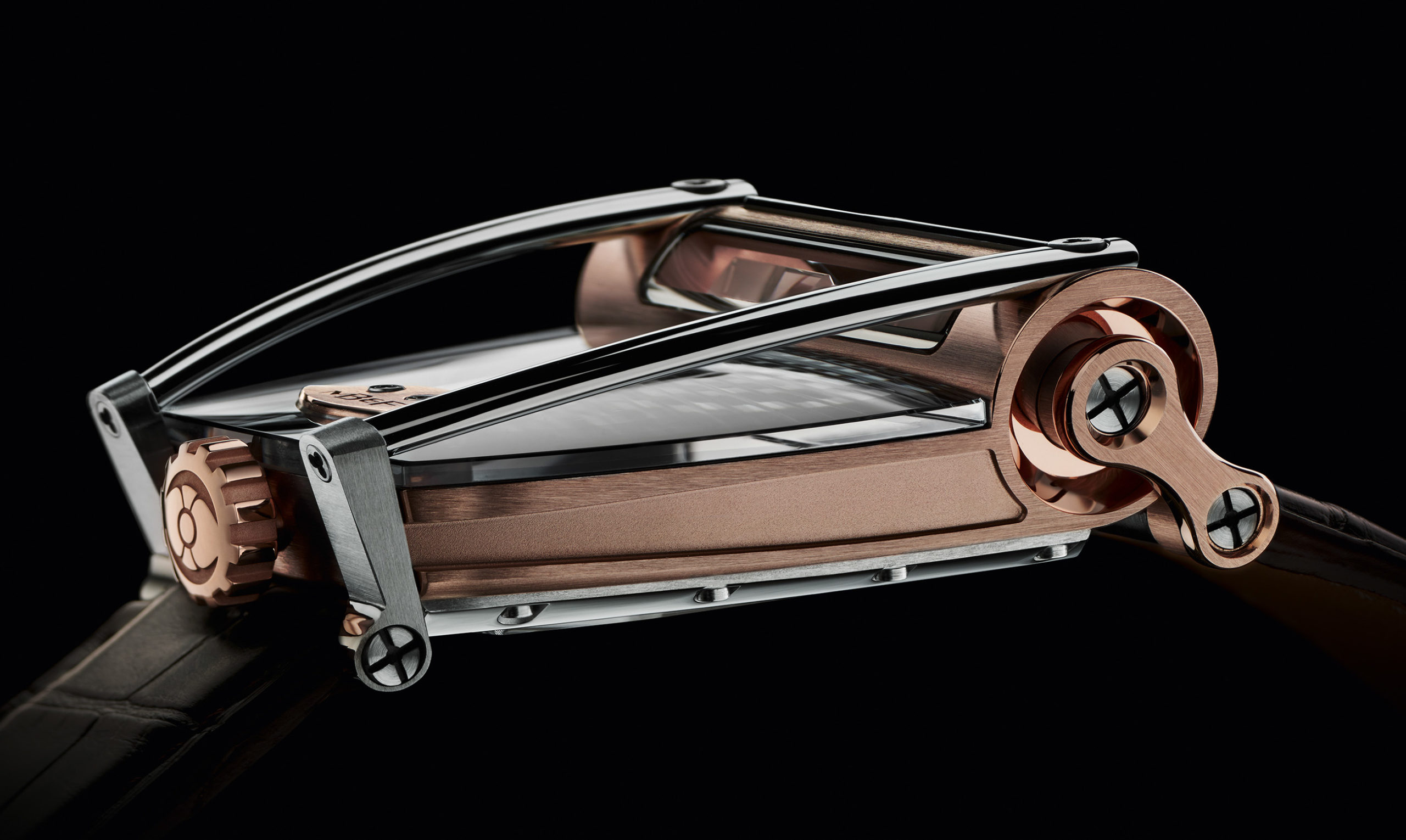 At first glance it may appear that the sapphire crystal covering the HM8 Engine is circular and positioned above the battle-axe rotor, but it’s not. The complete top of the case is one piece of sapphire crystal with sections of the crystal metallised to create a bluish border. That crystal, combined with the polished roll bars on each side, the oil sumps underneath, and the time displays created by optical prisms highlight HM8’s unrestricted horological creativity. 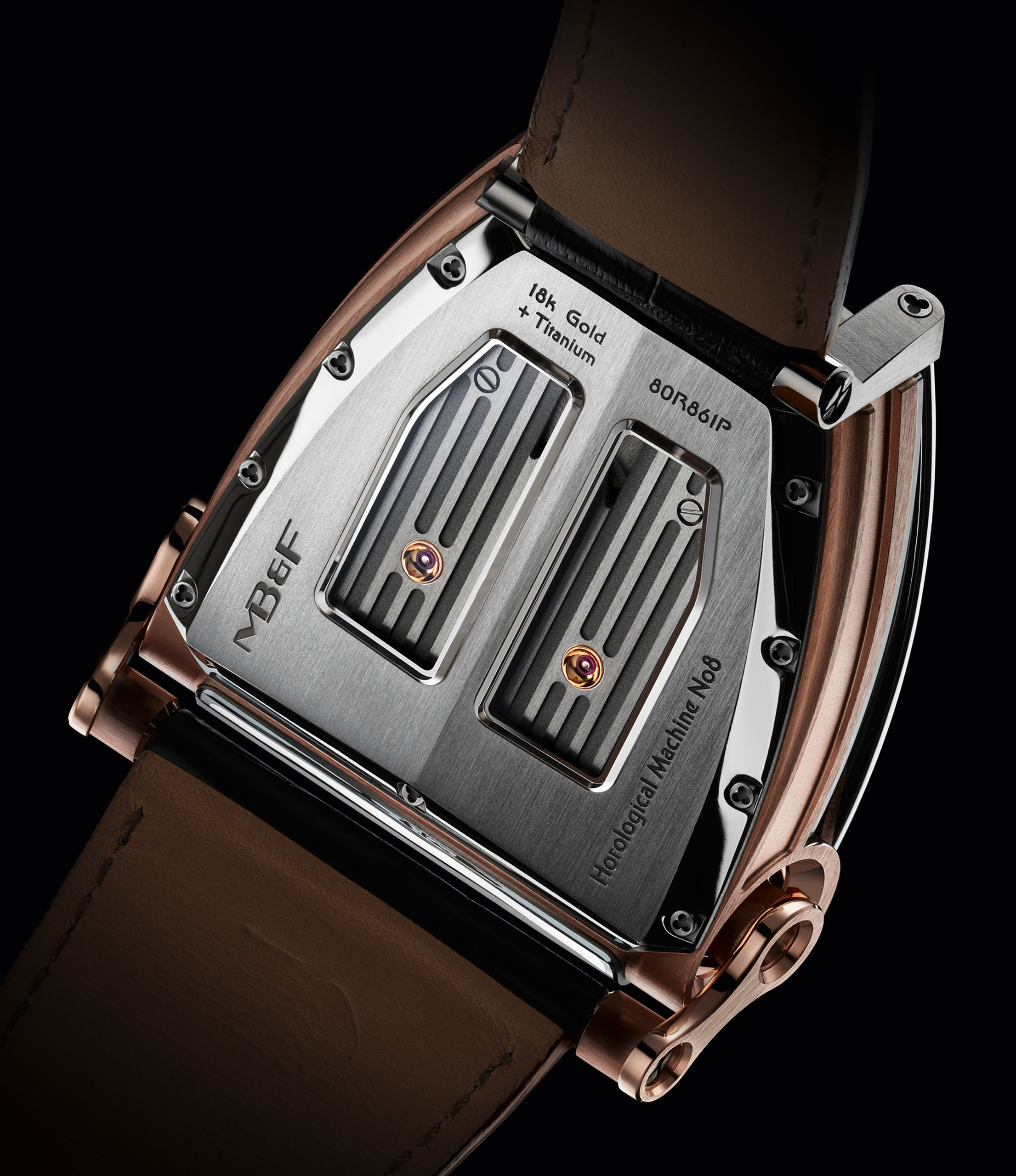 HM8 Can-Am is powered by an in-house developed bi-directional jumping hour and trailing minute indication module, on a Girard-Perregaux base movement. This movement is inverted to put the winding rotor on top and modified to drive the prism indicator module. The finishing of the movement is first class, which it has to be as it is completely open to view from the top. The power reserve is 42 hours. 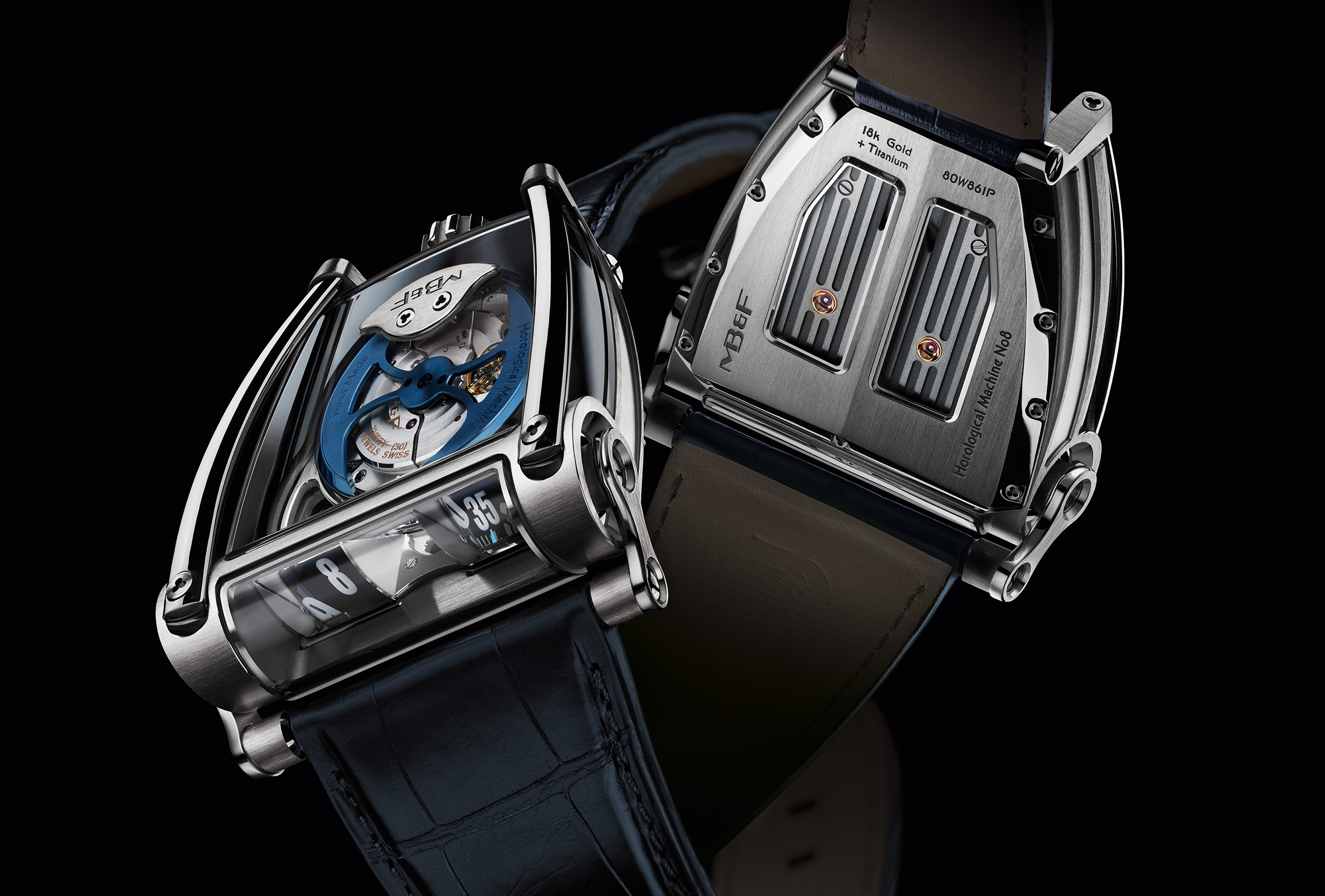 A bi-directional jumping hour and trailing minute displays on HM8 are materialised by overlapping discs (one for the hours, one for the minutes), completely covered in Super-LumiNova. The effect of large numerals is created by masking all of the lume except for the numbers. 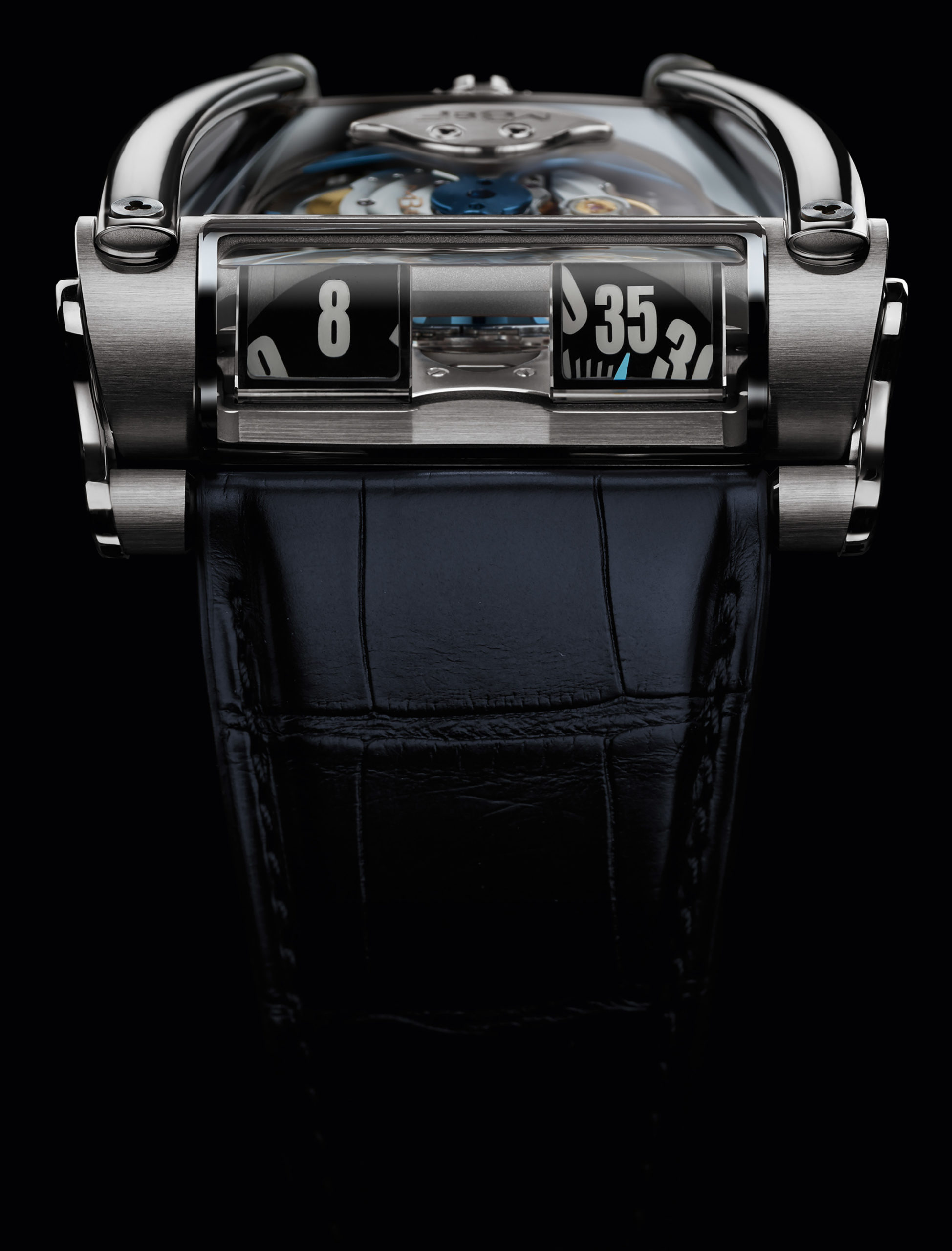 The discs rotate horizontally on top of the movement; they are visible in the corners of the transparent Engine cover. Yet the time indications are displayed vertically in a ‘dashboard’ at the front of the case. To achieve this, MB&F worked with a high-precision optical glass supplier to develop reflective sapphire crystal prisms that reflect light from the discs 90°. The prisms also magnify the indications by 20% to maximise legibility.

In the 1960s, Formula One car racing was mainly European and very regimented, with only small modifications permitted within tight rules designed to slow cars down. The engines were only developed up to 600-horsepower. A few North American racers balked at all the restrictions and decided to create their own racing series, the Canadian-American Challenge Cup (which became more popularly known as the Can-Am). A series launched many of the greatest names in car racing, including Lola and McLaren. The Can-Am basically had no rules except to go fast!

The Canadian-American Challenge Cup was a Group 7 SCCA/CASC sports car racing series running from 1966 to 1987, with two races in Canada and four in the USA each season. Because the class permitted virtually “anything goes” in terms of engine size, power and aerodynamics, the Can-Am was a hotbed of technical innovation. Wings, race turbocharging, ground-effect aerodynamics, and materials like titanium were all honed in the Can-Am. As long as a car had two seats, bodywork around the wheels, and met basic safety rules, it was likely to qualify. At its peak, Can-Am cars had the most advanced racing technology in the world, and with 1,000 horsepower compared to Formula One’s 500-600 horsepower at the time, Can-Am cars lapped some tracks faster than F1 cars. Here the MB&F Horological Machine N°8 CAN-AM. 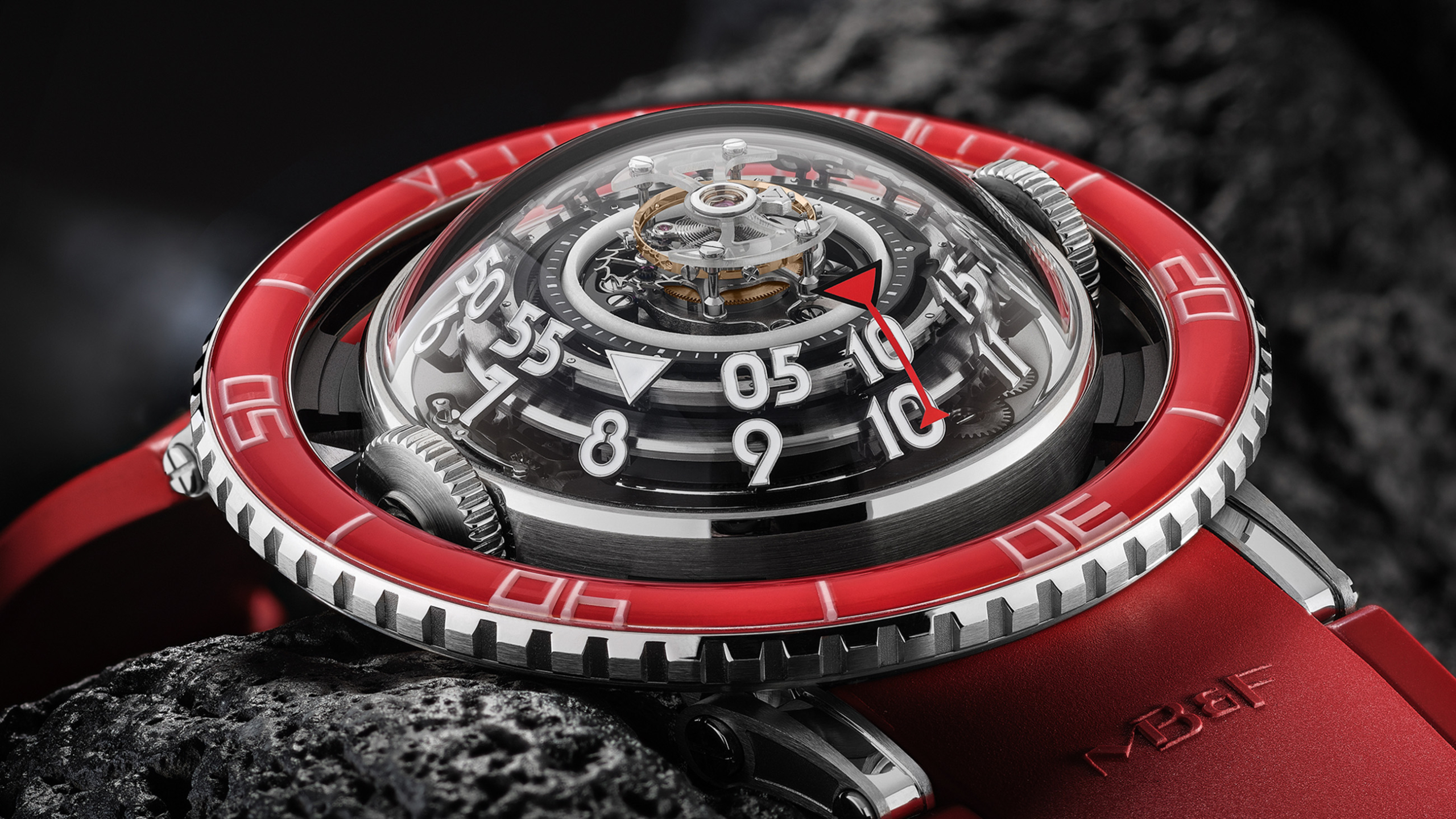