Time is usually – nearly always – displayed by a circular indication: one dial and two (or three) with the time displayed around a perpetual circle. However, this 360° representation of time goes against everything we learnt as we grew up drawing a straight line on a blank page and marking it Past, Present and Future. Why do we think of time as travelling in a straight line yet display it rotating around a circle? The answer is straightforward: mechanisms that continually rotate are much simpler to produce than those that trace a straight line then return to zero. In fact, the latter is so difficult that, until now, nobody has ever managed to develop a production wristwatch with true retrograde linear displays.

Linear. On the UR-CC1, there are two horizontal indications displayed by two cylinders: one for the (jumping) hours, the other for the retrograde minutes. And don’t be lulled by the apparent simplicity of the displays; the UR-CC1 is the result of more than three years of research, development, production and testing to ensure that the rotation and instant fly-back of the large hour and minute cylinders was achieved without compromising accurate timekeeping. 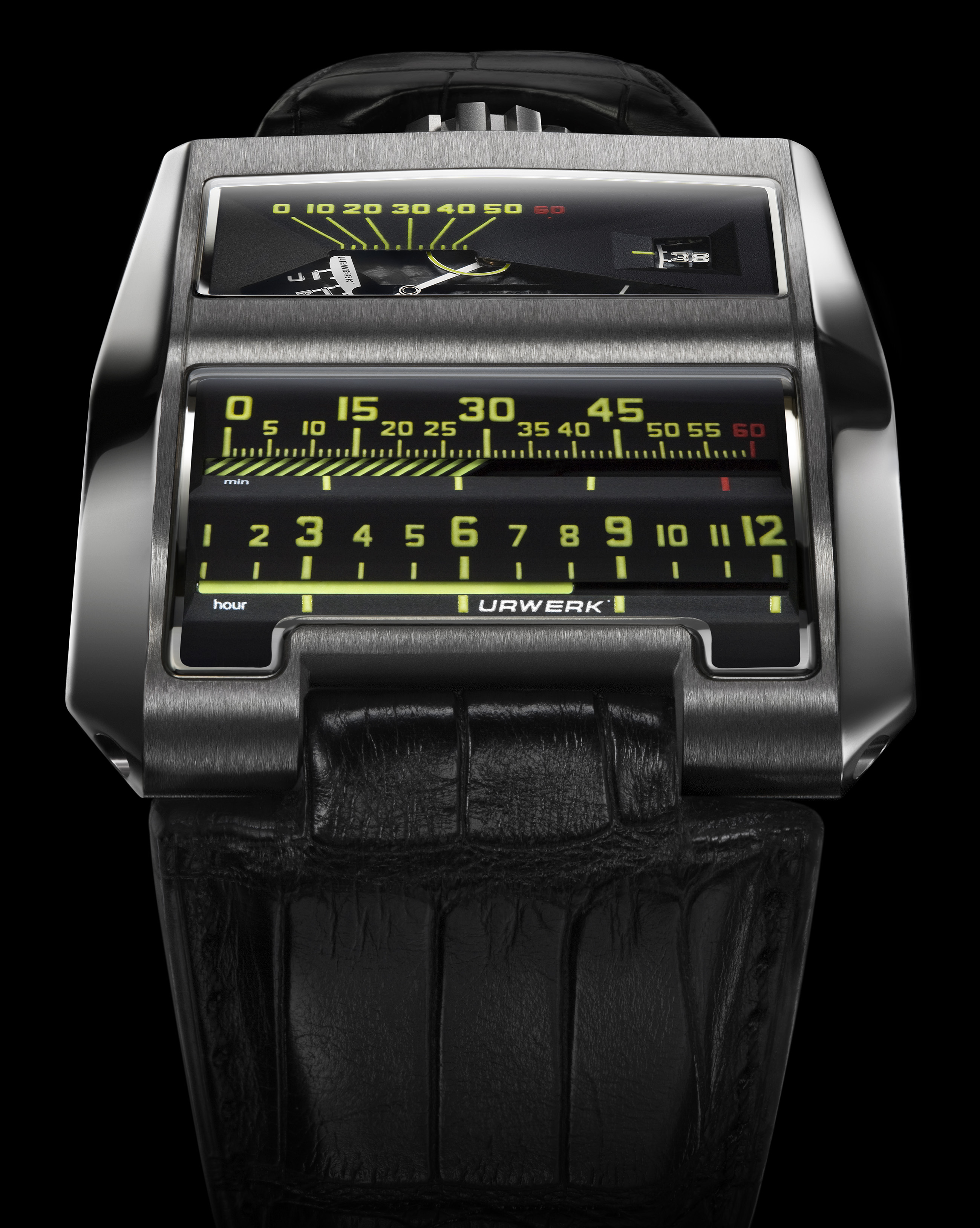 Triple-cam. A vertical triple-cam operating a toothed rack (visible through a window in the side of the case) rotates the minute cylinder. From zero to sixty minutes, the minute cylinder rotates through 300°. On arriving at the 60-minute mark the cylinder instantly (1/10th of a second) reverses back to its original position thanks to an extra-flat linear spring. The retrograde movement of the minute cylinder triggers the hour cylinder to advance (jump) one complete hour. 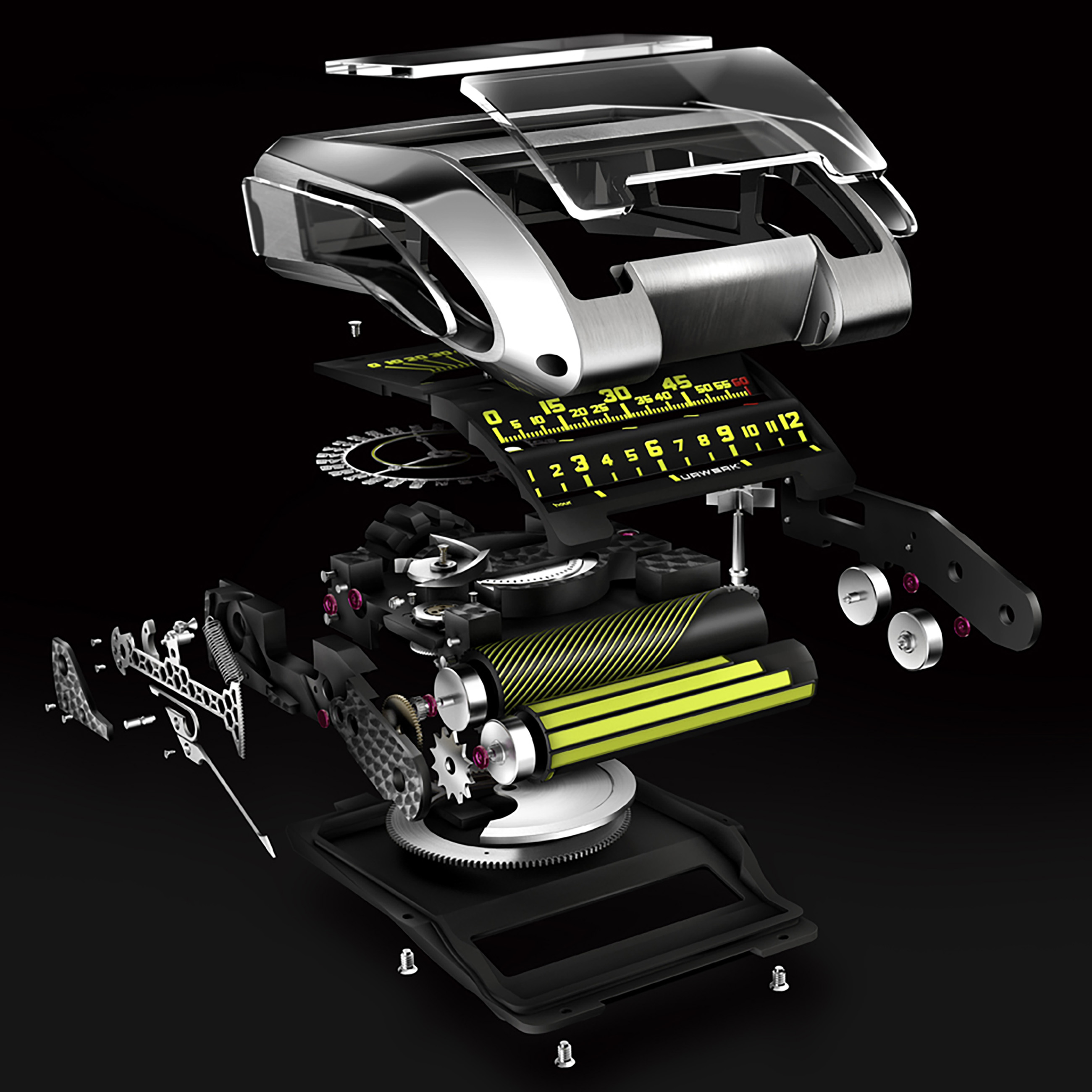 The triple-cam is crafted from bronze beryllium, a metal selected for its inherently self-lubricating properties and low co-efficient of friction, and takes the form of three small inclines. The precise shape of the curve of the incline is relayed to the pivoting rack, while the teeth on the end of the rack mesh with and rotate the minute cylinder. The triple-cam makes a complete rotation in three hours so that each of the three inclines takes 60 minutes, and 180 points of reference have been calculated on each of the three cams to ensure the precise and isochronic rotation of the minute cylinder.

Toothed segment: The toothed segment at the end of the rack transmits and transforms the rotation of the triple-cam into the rotation of the minute cylinder. The toothed rack presents two properties that at first appear contradictory: absolute rigidity, so as to accurately transmit the motion of the cam to the minute cylinder; and extremely low mass to consume as little energy as possible and minimise the effects of gravity and accelerations/shocks. This vital component has been fabricated by Mimotec using their photolithography process. The honeycomb pattern of the structure resolves the two apparently contradictory requirements of maximum strength and minimum weight. 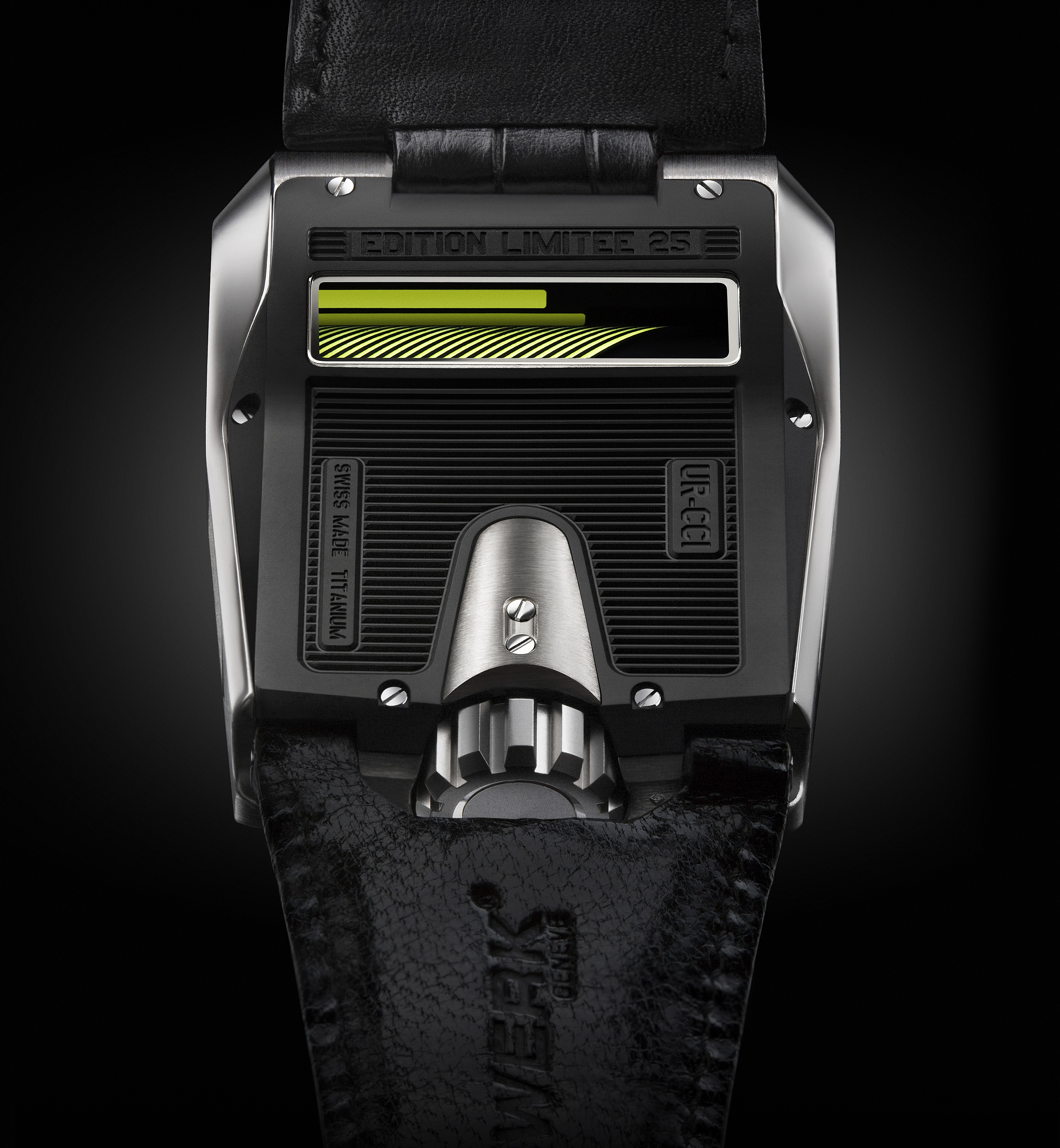 Seconds disk: The dial of the UR-CC1 is animated by a rotating disk displaying the seconds both digitally and linearly – a world first! This incredible exploit was achieved thanks to Mimotec’s photolithography production technique; the procedure is even more precise than electro-erosion. To reduce mass to an absolute minimum, the minuscule numerals were even skeletonised. A small tab at 10 seconds bearing the URWERK logo precisely counterbalances the disk’s single-digit numbers. This marvel of micro-precision weighs only 0.09 grams.

Rotor Fly Brake: UR-CC1 features URWERK’s pneumatic shock-absorbing Rotor Fly Brake automatic winding system, which minimizes rotor and mechanism wear and damage from shock and harsh movements. The operation of the Rotor Fly Brake is visible through a window on the side of the case. 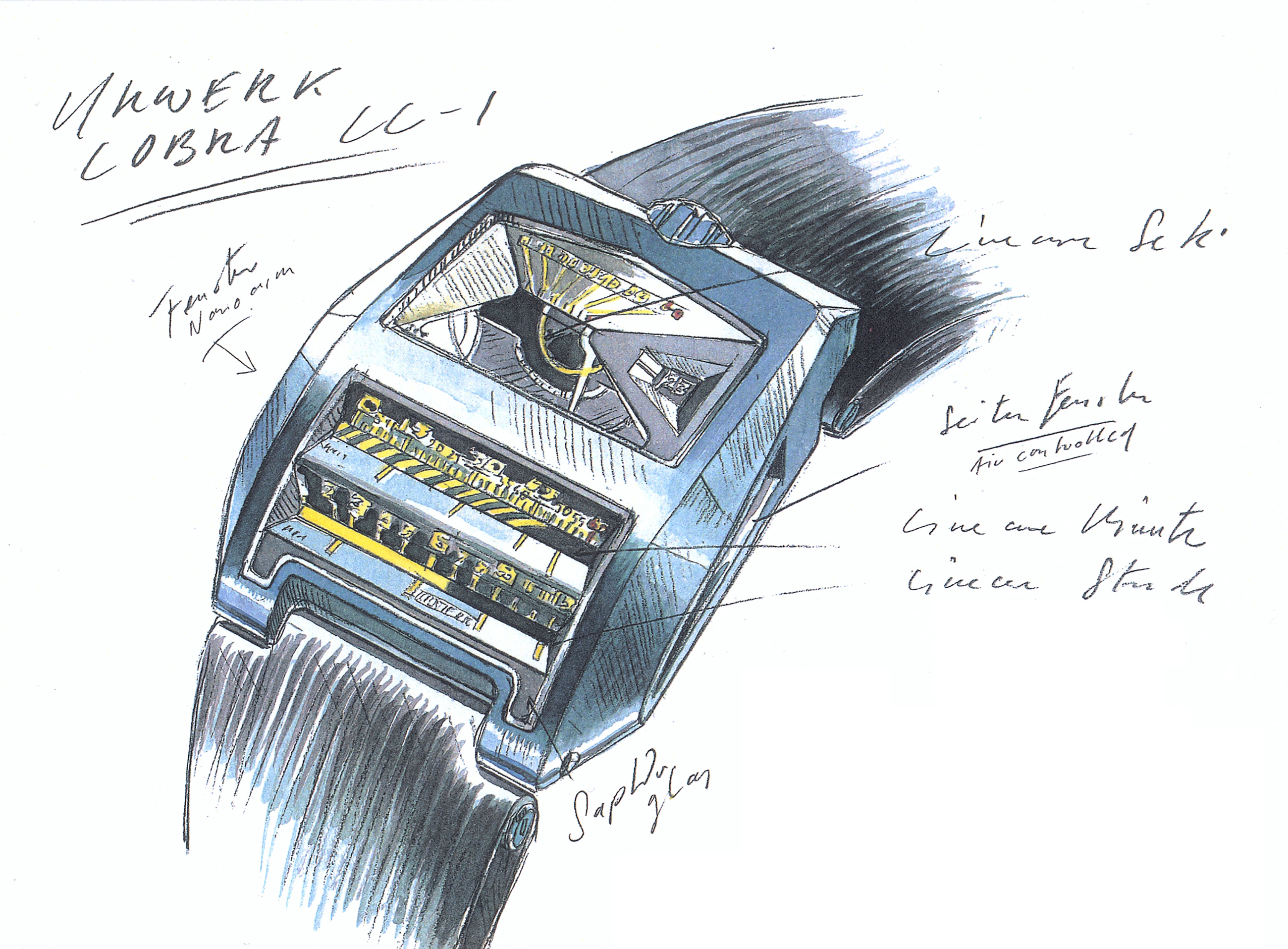 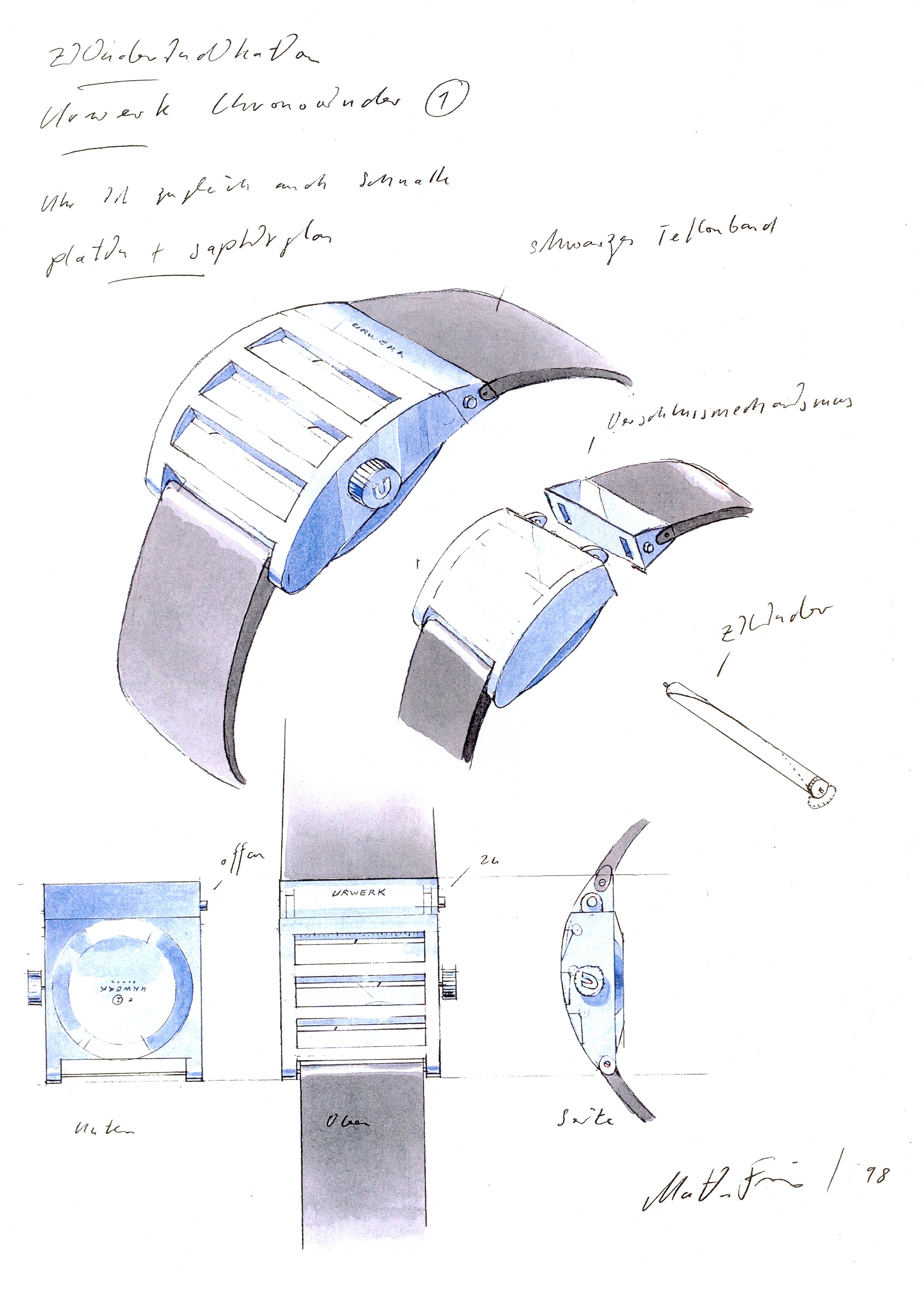 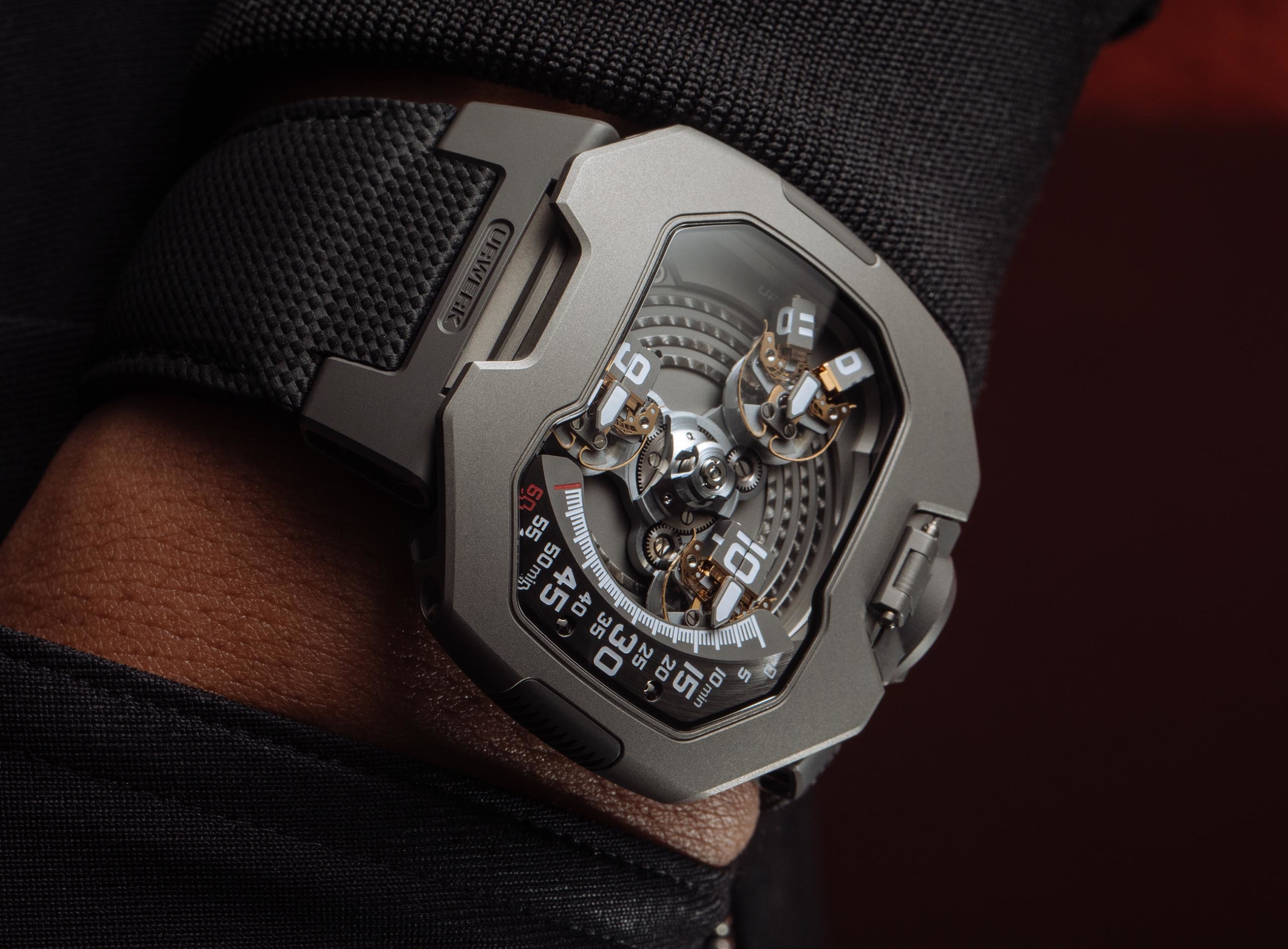 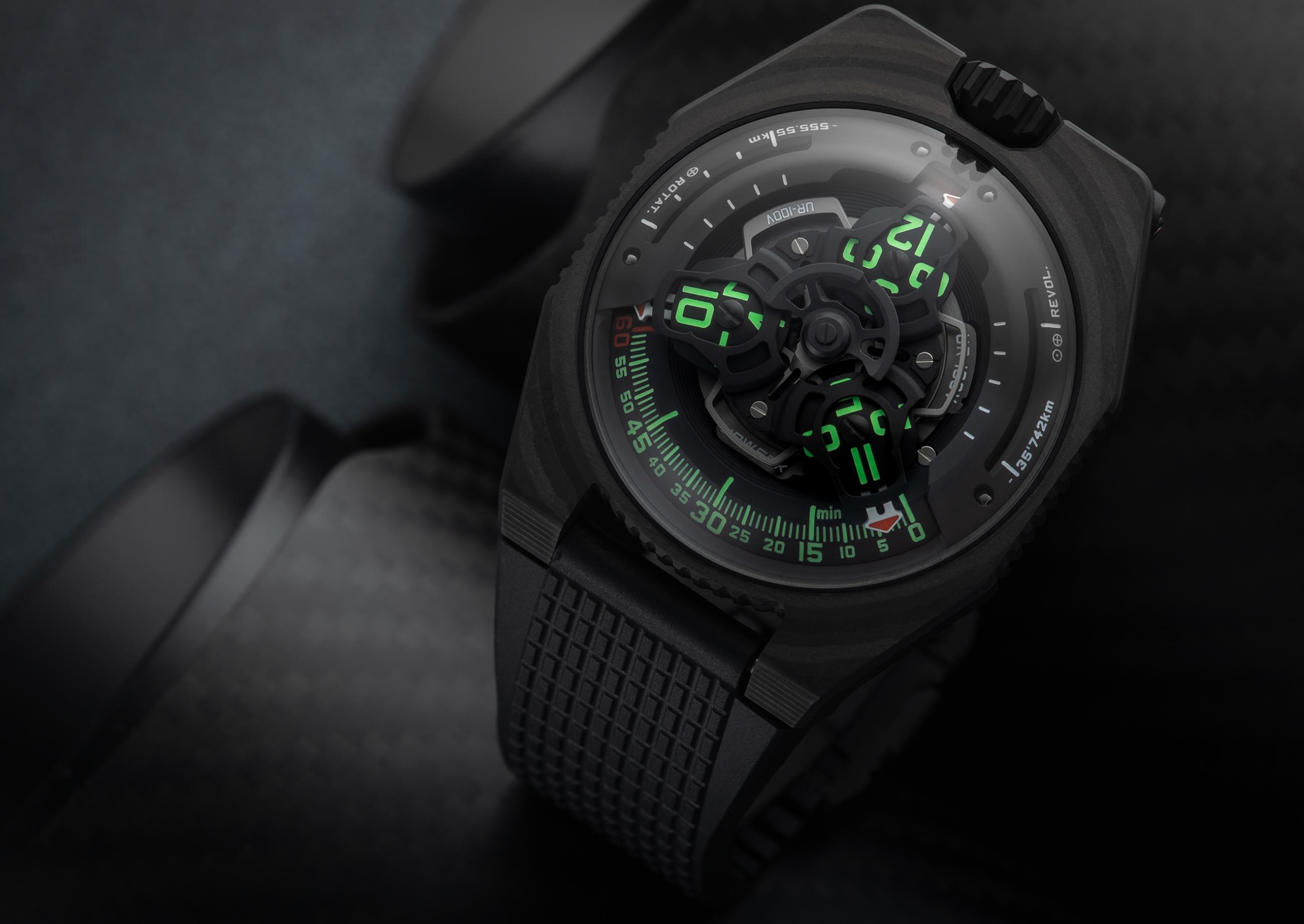 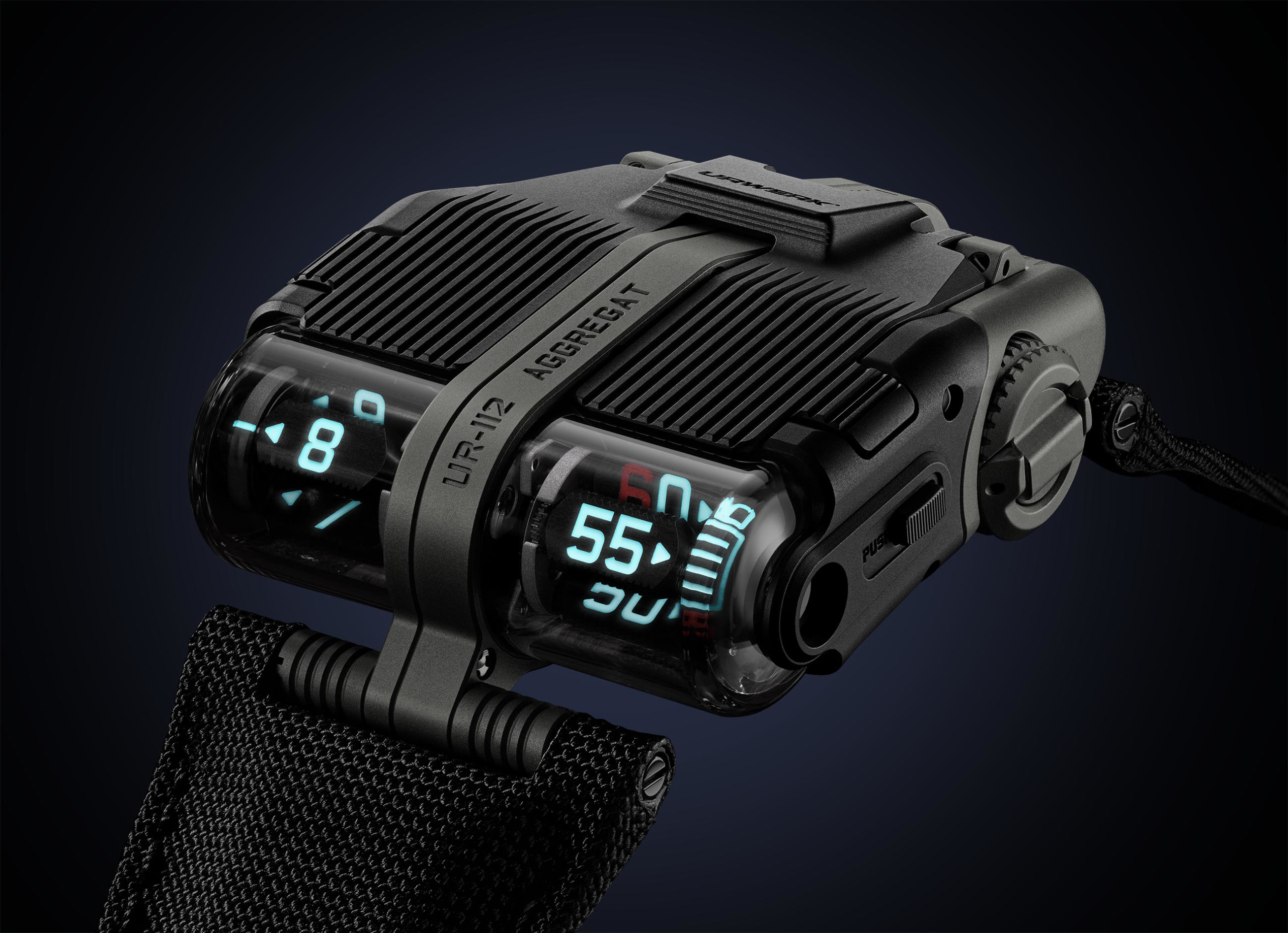