Fleurisanne engraving at the peak of its art

Since 2014, Chopard has been introducing each year a L.U.C XP watch intended for women who appreciate artistic crafts. This timepiece is a flagship model of the L.U.C collection by Chopard, entirely in-house produced in its Fleurier-based Manufacture. Its 35 mm diameter lends itself to a symphony of delicate variations. Embodying the peak of its art, Fleurisanne engraving unfurls this year on the dial and movement of this new creation: the L.U.C XP Esprit de Fleurier, issued in an eight-piece edition. Never has the opulent beauty of the peony received such a glowing tribute. 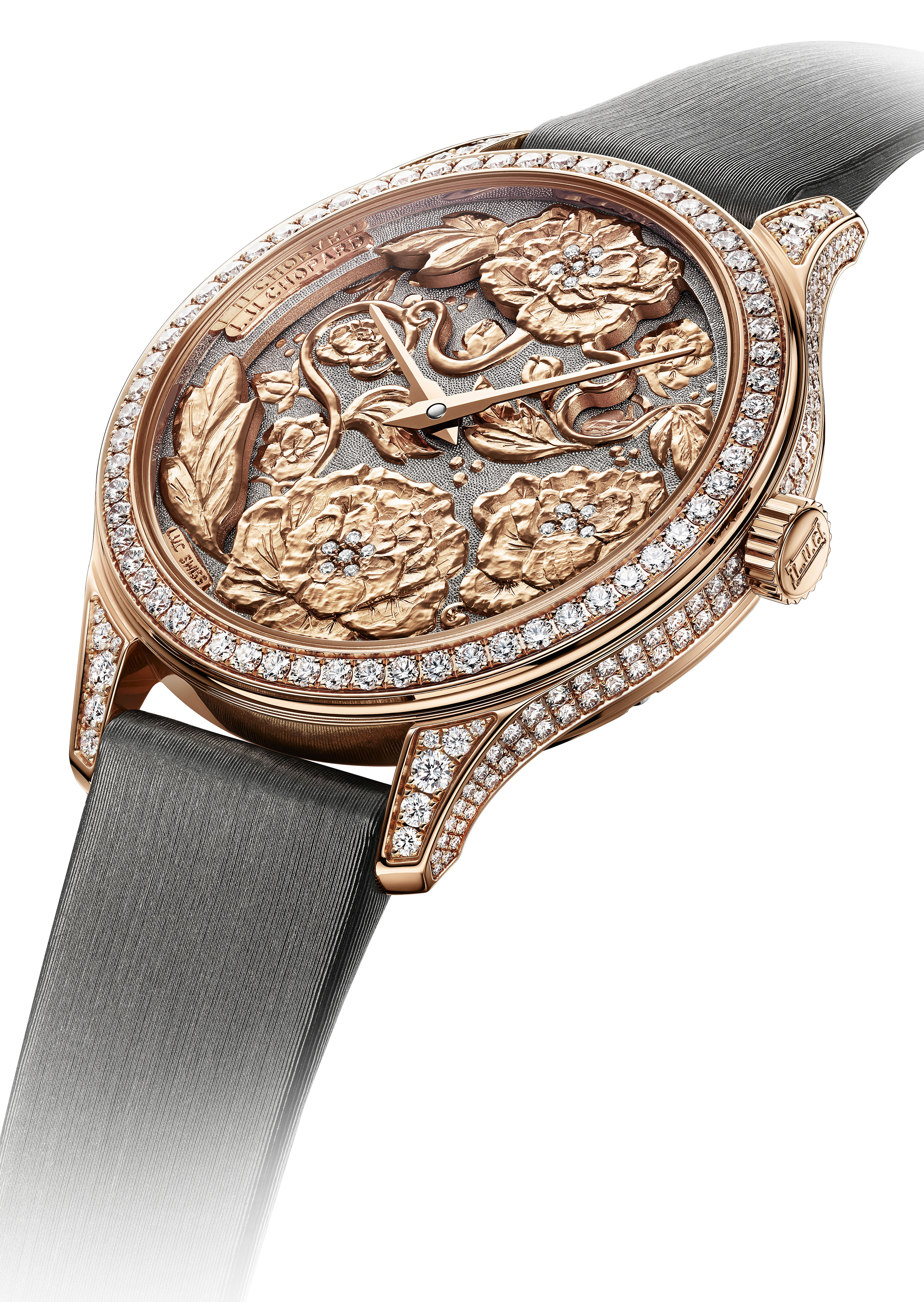 From one flower to another
Nestled in a quiet valley, the village of Fleurier is enlivened by three rivers whose banks welcome a riot of wild flowers each spring that inspired its name. It was the birthplace of a tradition of fine watchmaking craftsmanship whose reputation transcended borders to gain true fame as far afield as 19th century China. Above and beyond the complexity, reliability and precision of the movements favoured by the Imperial court, the seductive appeal of these timepieces also lies in a relief engraving process highlighting the motifs featuring scrolling patterns or flowers that appear as if in first bloom. From the humble meadowsweet of its homeland, to the peony whose attraction reached great heights under the Tang dynasty, was a mere step that was taken with remarkable success. Today, this bouquet of majestic blooms, adorning both the face and heart of the L.U.C XP Esprit de Fleurier Peony, revives a period of history in which a delightful bridge spanned two geographically distant cultures. 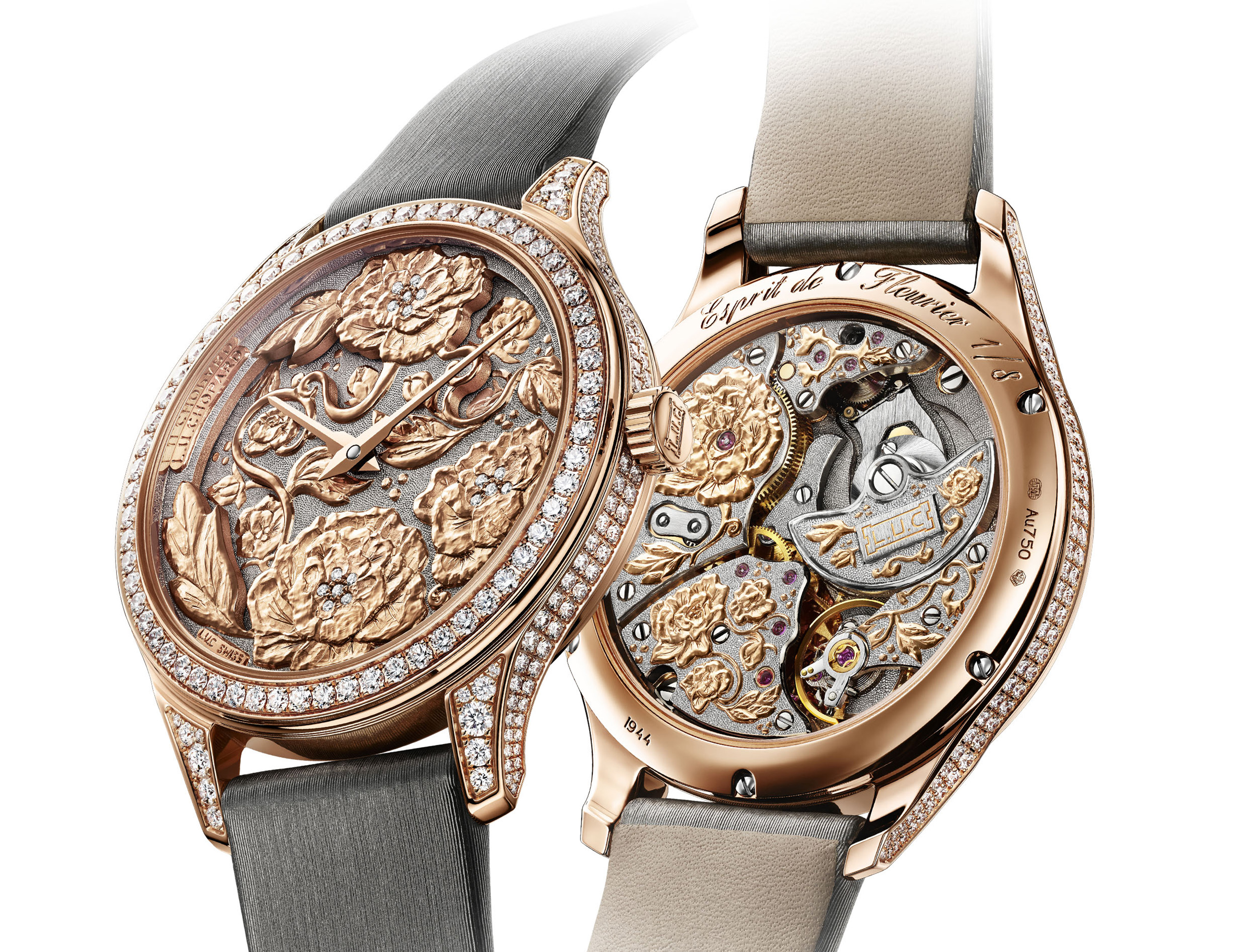 A watch enrolled in the school of patience
The artisan to whom Chopard entrusted the crafting of the eight models exclusively available in its boutiques has not taken any formal training to master the art of Fleurisanne engraving. Which is perfectly logical, since the only ‘education’ that has thus far succeeded in ‘teaching’ mastery of this incredibly delicate technique is the school of wholehearted dedication. Keenly aware of the threat of extinction hovering over this traditional engraving technique, Chopard provides in-house training for the nimble fingers capable of perpetuating it. Giving life to the exquisite motif gracing the L.U.C XP Esprit de Fleurier Peony requires a full month and a half of work devoted to engraving the dial and movement. 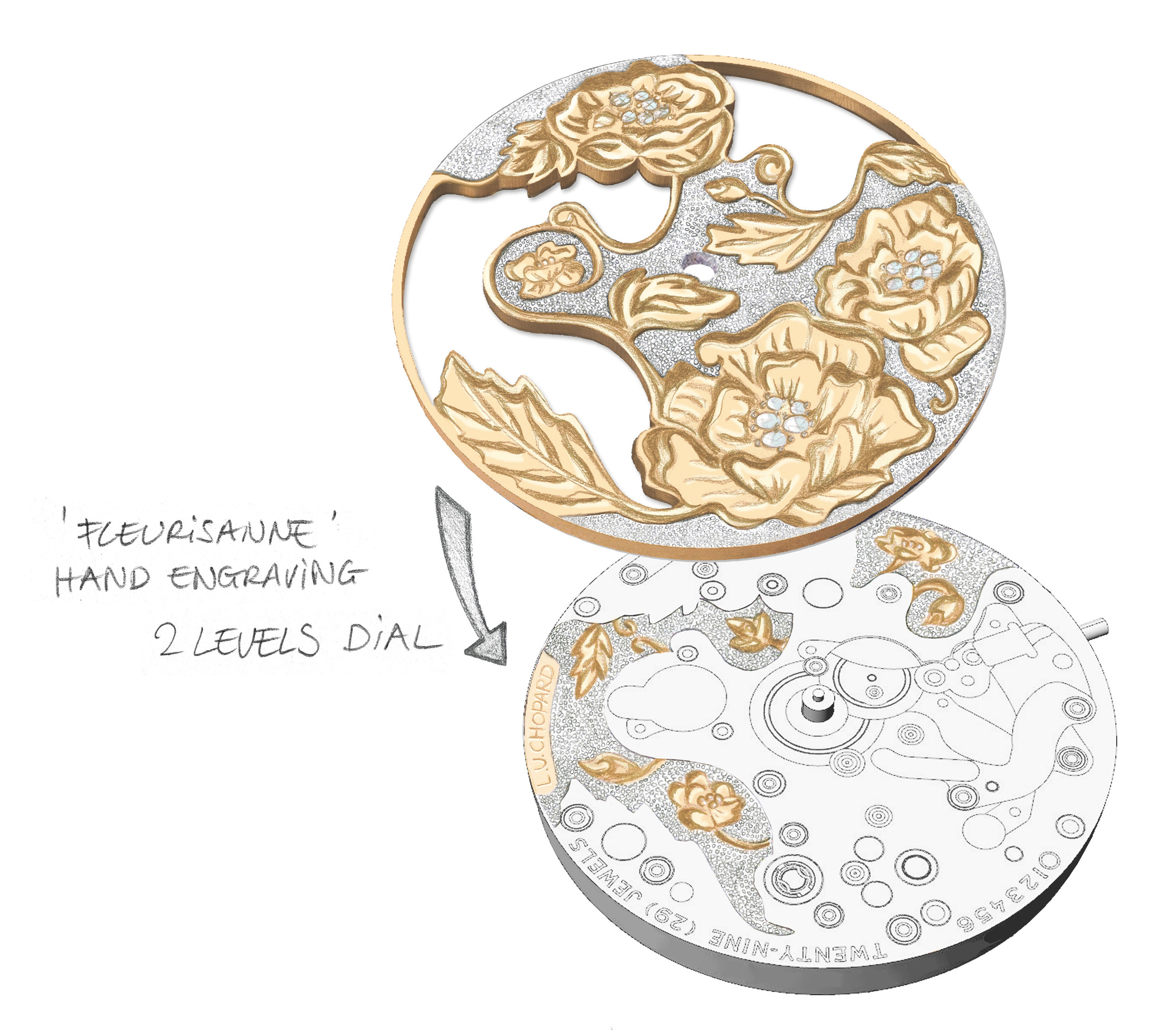 The nobility of the artisan-style touch
Entirely crafted in the workshops of the Manufacture, the double white gold dial is sculpted using a raised rather than a hollowed technique, in order to create a striking contrast with the background. By incising the surrounding material, the artisan forms a prominent surface that can then be engraved. The case is stippled dot by dot to create a finely grained appearance. It provides a perfect frame for the polished peonies standout radiantly on the upper dial. 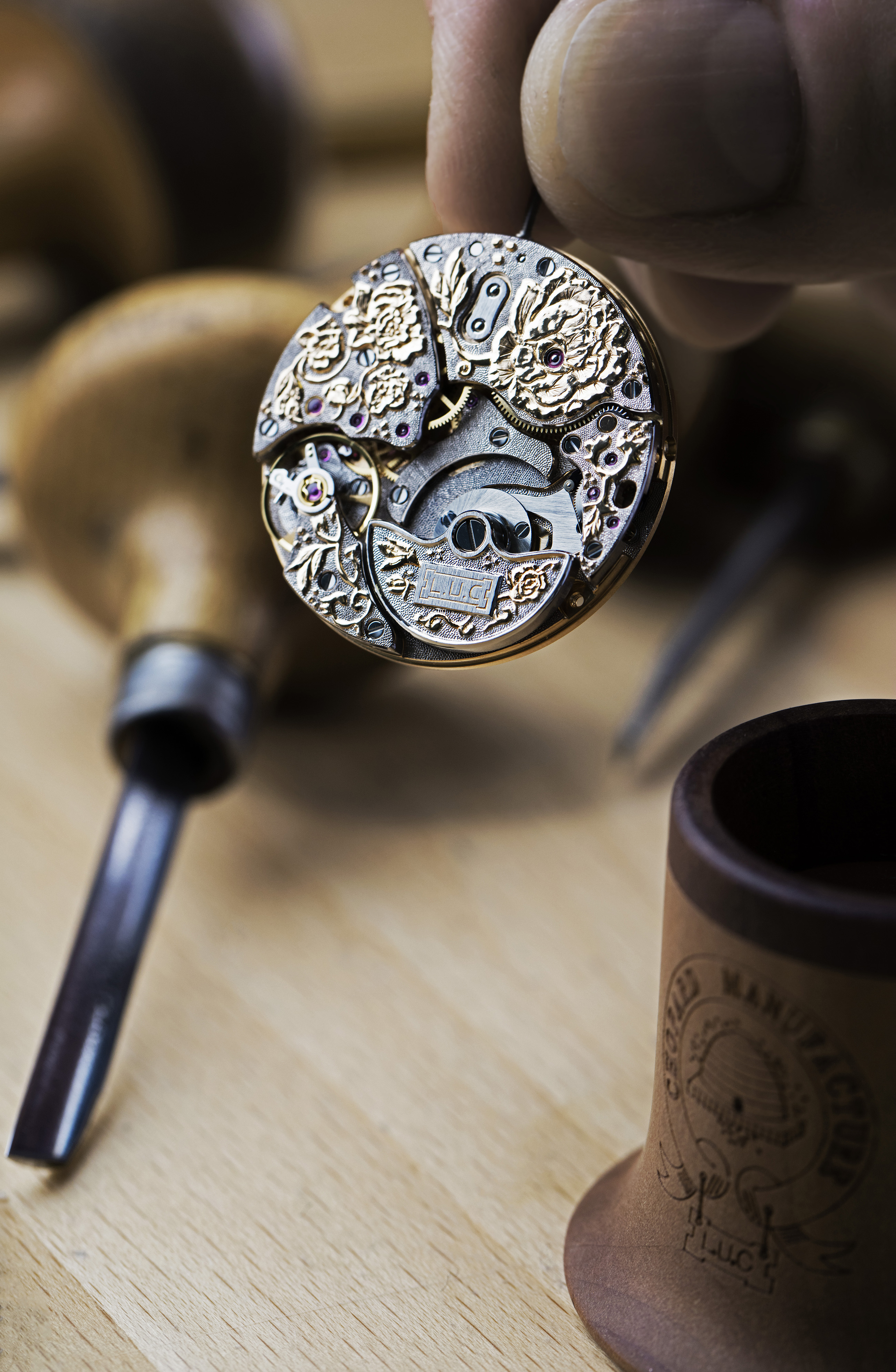 Their pistils are set with diamonds that further accentuate the refinement of the flower. The dial reveals fascinating glimpses of the movement bridges, engraved using the same Fleurisanne engraving technique, and then gilded. This process performed after the engraving also requires a great deal of care and patience. On the dial, just as on the bridges and even the platinum micro-rotor, the volume-effect workmanship is truly extraordinary. The sophistication of the L.U.C XP Esprit de Fleurier Peony extends onto the bezel and case middle that are entirely set with diamonds.

Fleurier, Chopard’s garden of Eden
It is in this Jura village that Karl-Friedrich Scheufele founded in 1996 a Manufacture dedicated to the production of high-precision movements. Just over 20 years on, it is clear that this radical decision signalled Chopard’s entry into the ultra-elite circle of authentic watch Manufactures. The location proved propitious to the development of the Haute Horlogerie collection bearing the initials of Louis-Ulysse Chopard. The movement of the L.U.C XP Esprit de Fleurier Peony is equipped with the patented Twin® technology, meaning two stacked coaxial barrels providing a generous 65-hour power reserve. Housing such a sophisticated self-winding movement within an ultra-thin 7.70 mm case is a genuine technical feat. It was made possible by an ingenious micro-rotor-based construction testifying to the impressive resources and horological expertise cultivated by Chopard. 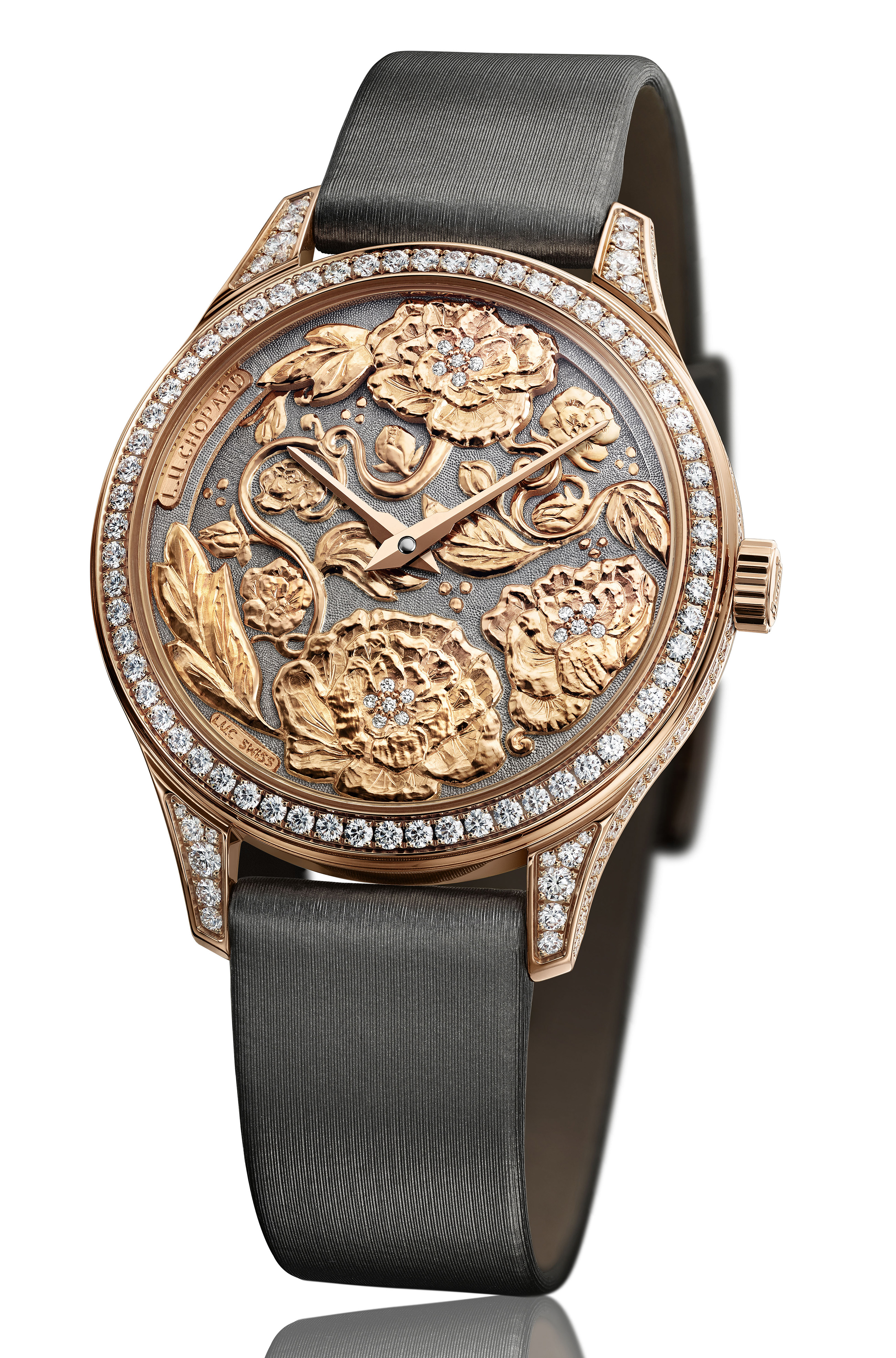 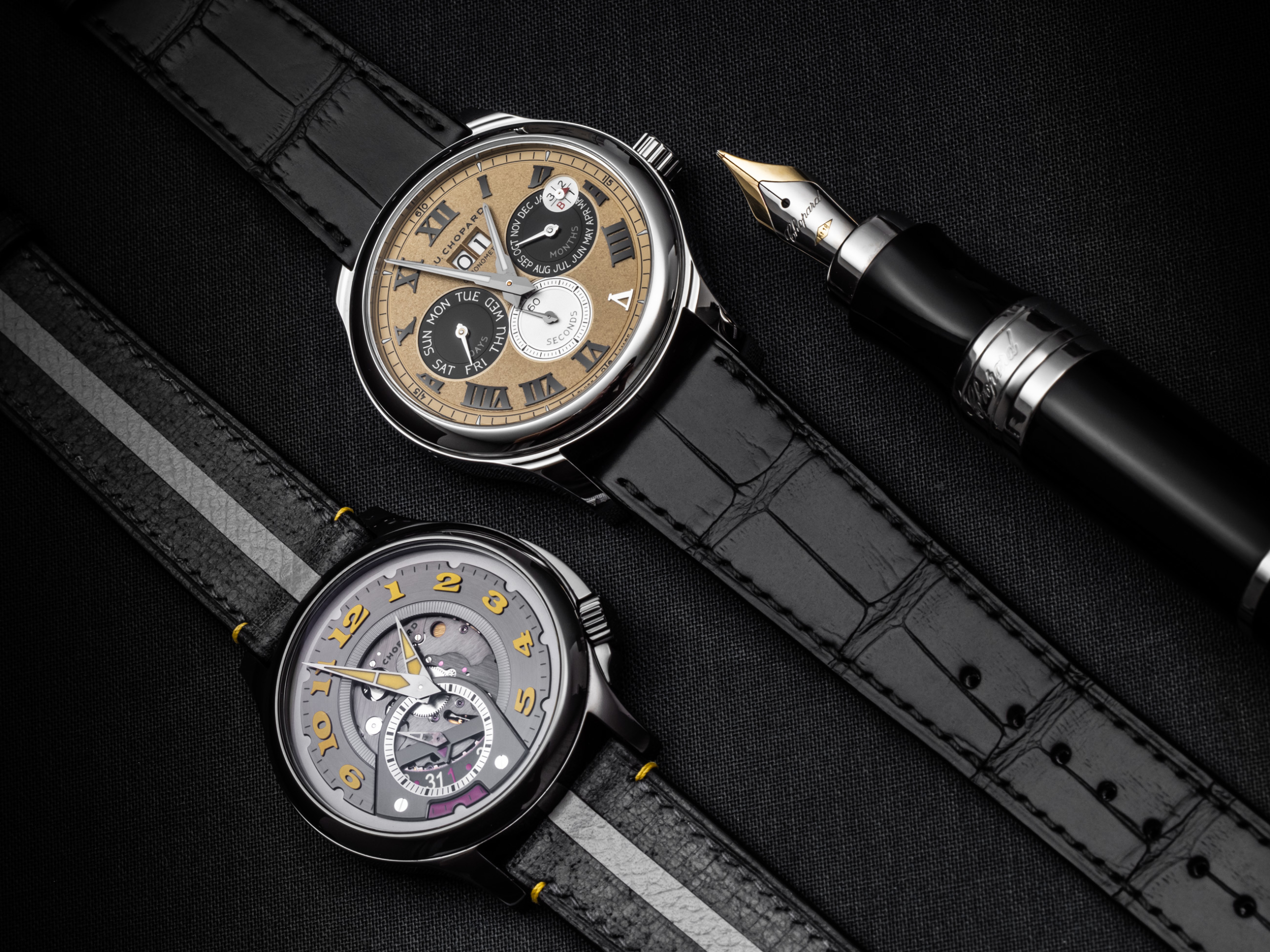 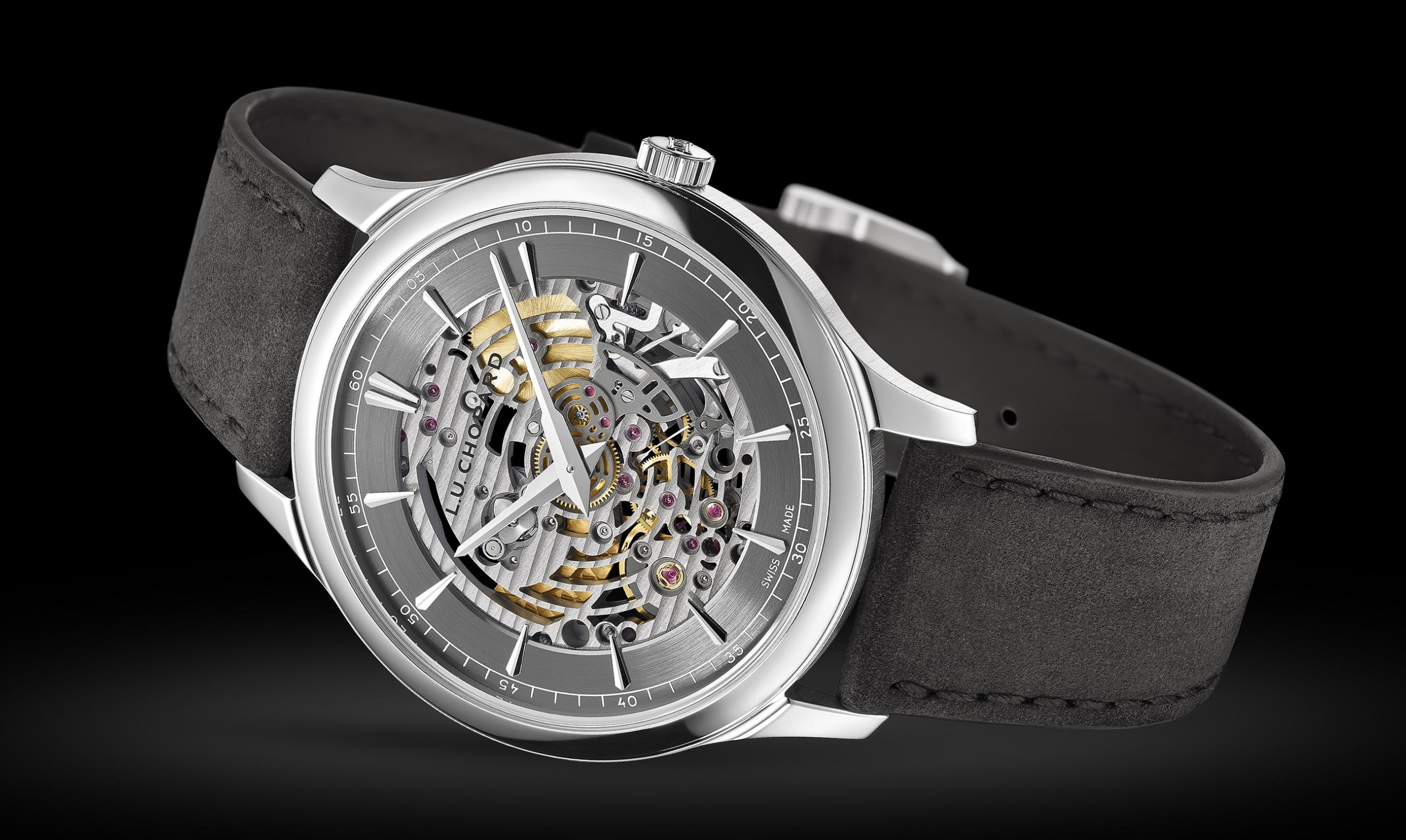 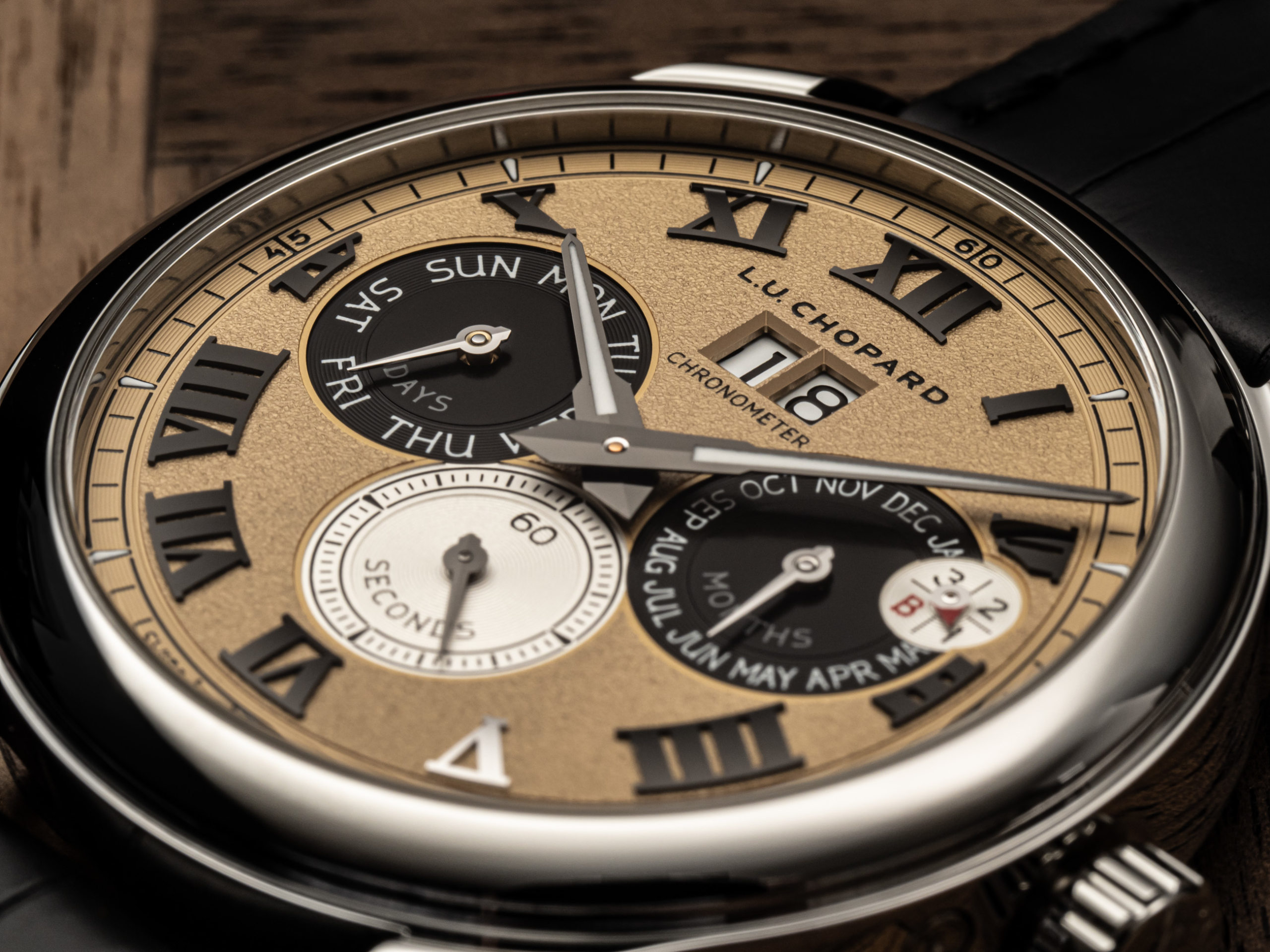