Marine Tourbillon Équation Marchante 5887 combines the bold and sporty aesthetic that has always marked the Breguet Marine line with a highly complicated movement and the finest hand decoration. Now Breguet offers this model in rose gold with a gold dial in slate-gray color. 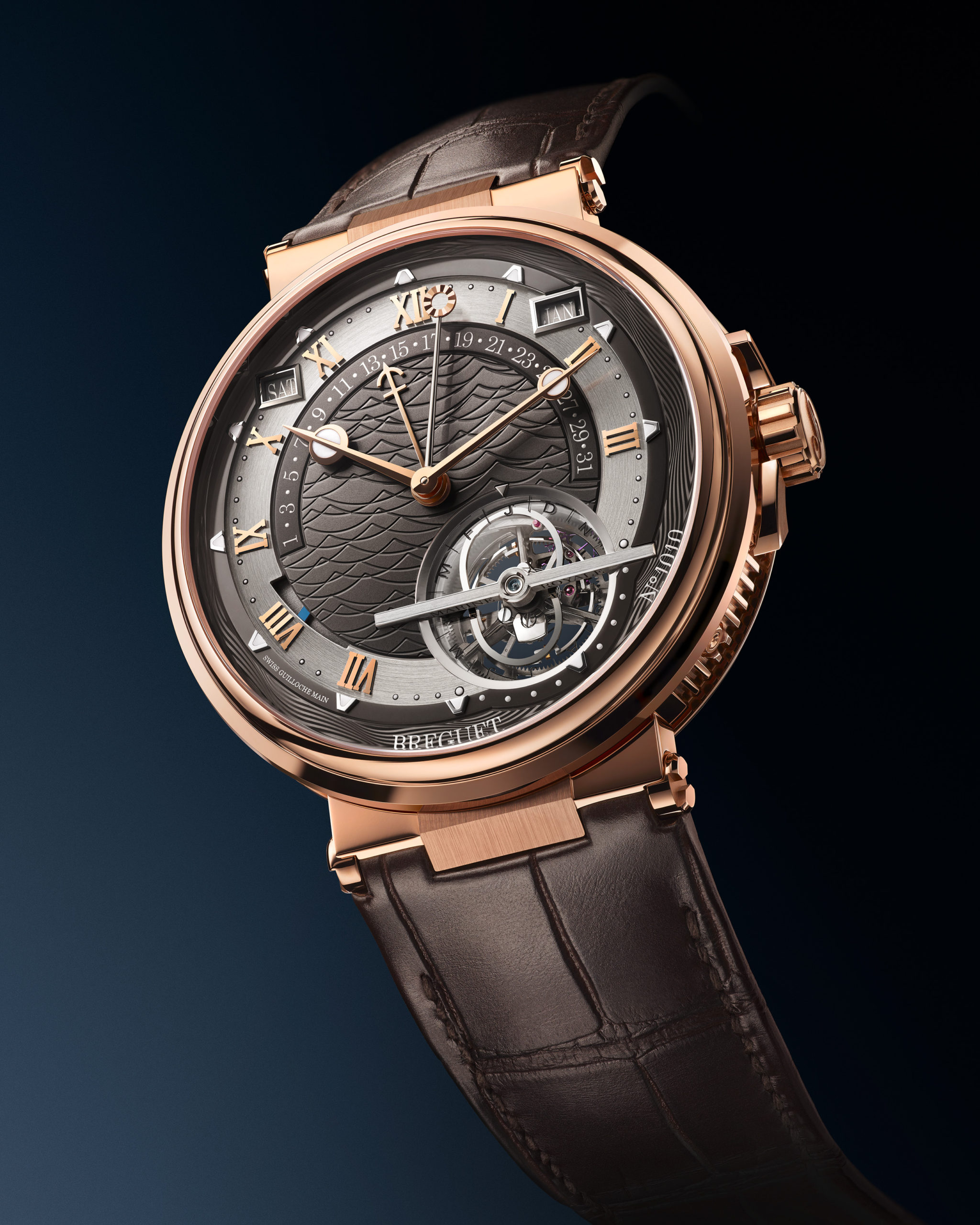 When it debuted the Marine Tourbillon Équation Marchante 5887, Breguet wove together three threads from its history. First, its legacy of the invention of the tourbillon, patented by founder Abraham-Louis Breguet in 1801. Important as well is its unparalleled patrimony in the field of complicated watches: Marine 5887 includes, in addition to the latest generation tourbillon, a perpetual calendar and an equation of time. Third, by uniting these two historic pillars of the house in a Marine timepiece, Breguet recalls the founder’s appointment in 1815 by the King of France, Louis XVIII as Horloger de la Marine Royale, which made him the official watchmaker of the French Navy. 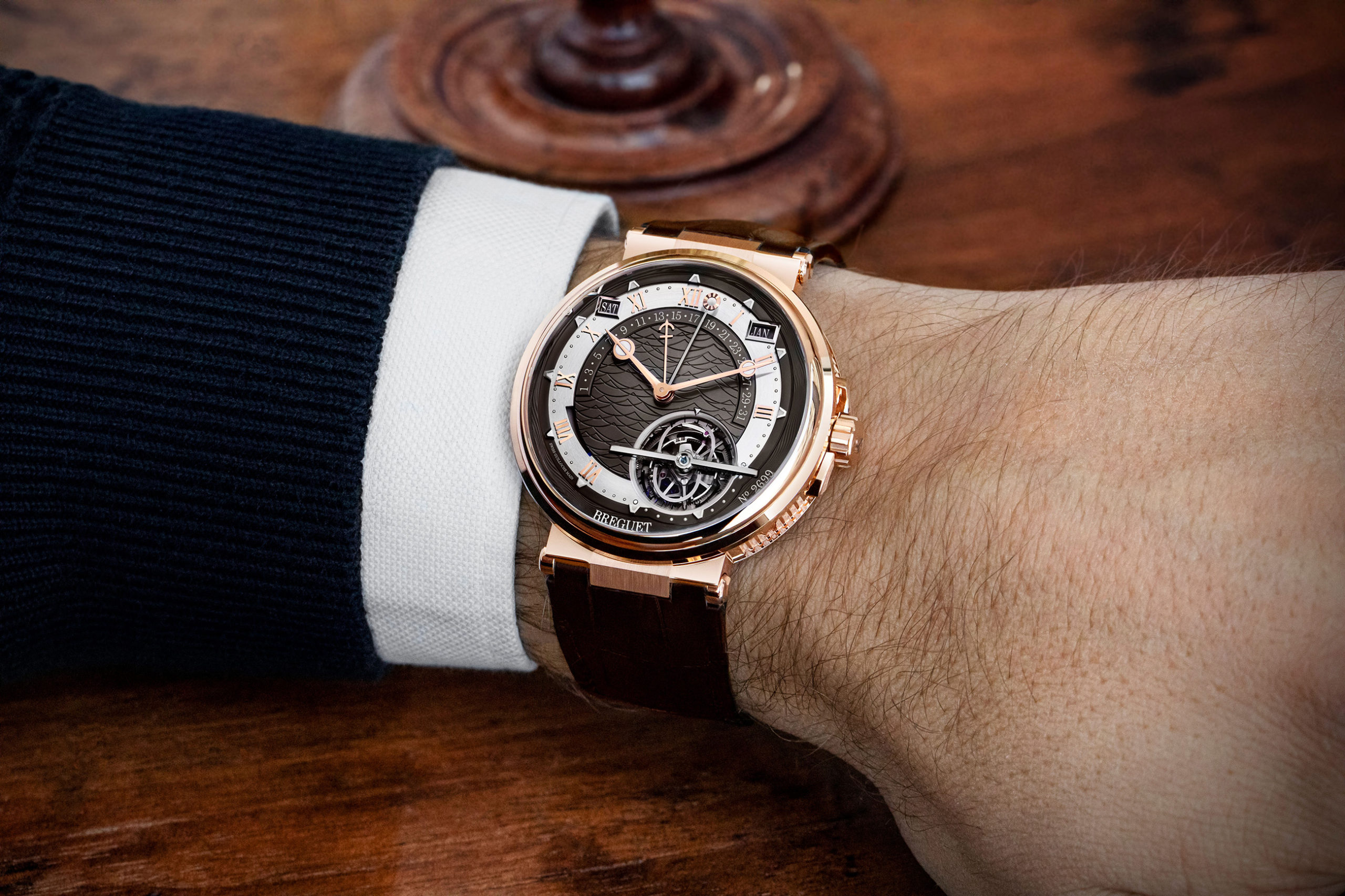 Maritime inspiration
Emphasizing the link between the Marine line and the sea is a guilloche-peaked wave motif in the center of the dial. The applied Roman numerals as well as the Breguet moon-tipped hands are in rose gold.

On the back, a depiction of an ancient flagship of the French Navy, the Royal Louis, has been hand carved across the bridges of the movement. The entirety of the vessel reaches across four bridges and fine details extend from one bridge to another. This calls for extreme precision in placement so that the elements of the image will line up perfectly once the movement is mounted. The barrel drum bears an illustration of a compass rose also engraved by hand. The peripheral oscillating weight in platinum, engine-turned and engraved with the Breguet legend, allows for a fully unobstructed view of the movement’s artwork.

At the heart of the movement is a cam on a sapphire disc that completes a full rotation per year faithfully duplicating the equation of time cycle. This transparent disc, with months of the year marked along its perimeter, allows one to see the tourbillon located underneath. The mechanism is completed with a set of gears called a “differential”. The genius of a differential is that it is able to combine two separate inputs into one output. The civil minutes indication is produced by the main gear train of the watch. The equation of time information is read by the finger following the cam’s form. Thus, the differential, in effect, performs the formula for calculating solar time (civil time plus equation of time) which is displayed by the solar minute hand. With two minute hands, the owner at a glance can read civil time and solar time. 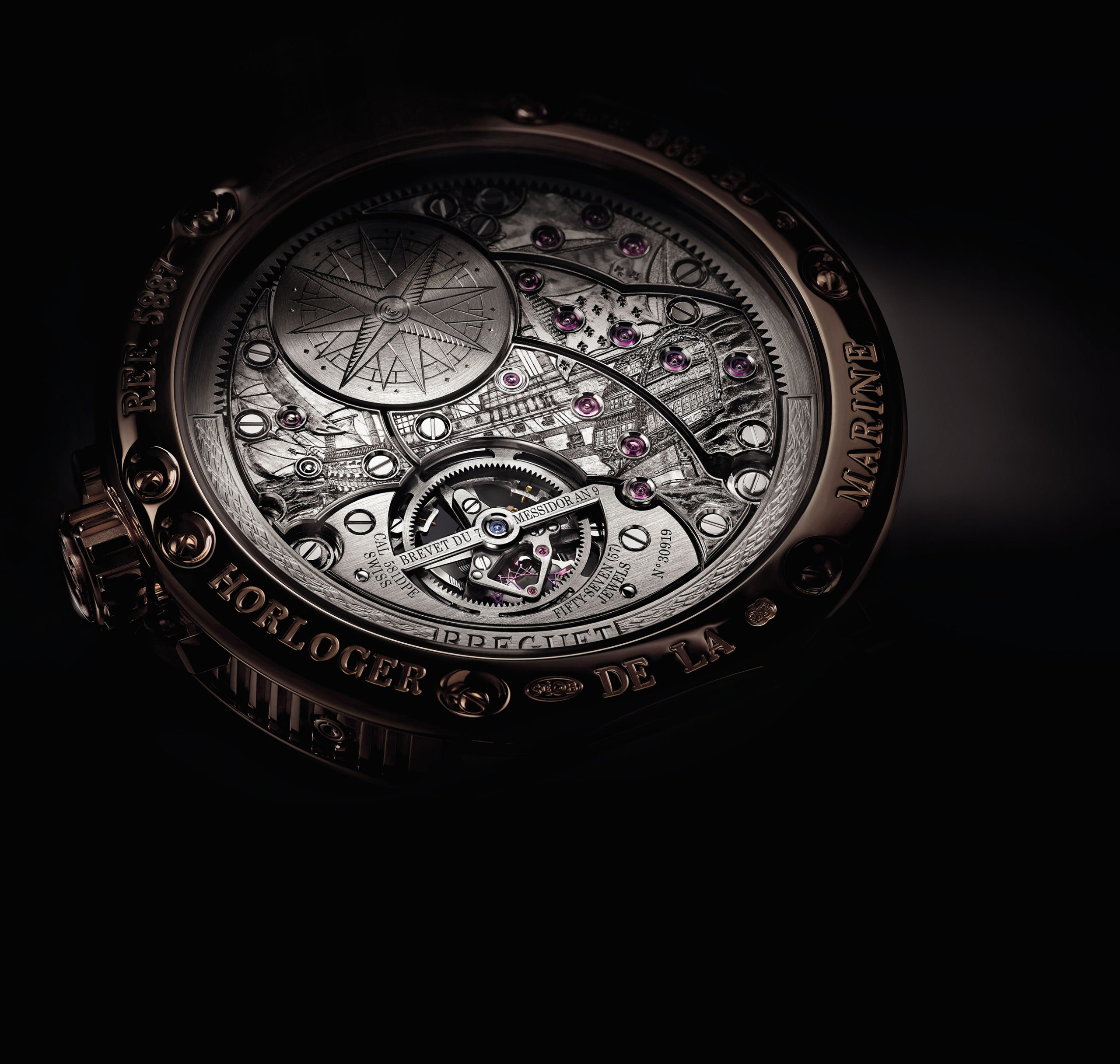 Perpetual calendar
The running equation of time display of this Marine model is paired with a perpetual calendar. The movement accounts for all of the irregularities of the four-year calendar cycle, the months of 30 or 31 days, and the month of February of 28 or 29 days during the leap year. The calendar display is unique among Breguet collections and embodies a newly constructed mechanism. Rather than with hands, the day of the week and the month are shown in small windows. The date is indicated with a hand known as “retrograde”. This hand advances along an arc until the end of the month, when in the middle of the night, it will reverse course and instantaneously snap back to “1” to start the next month.

Extra-thin tourbillon movement
The movement of this Grande Complication model is derived from the extra-thin self- winding tourbillon caliber 581. The basic notions of tourbillon design rooted in Abraham- Louis Breguet’s patent remain unchanged: the timekeeping elements of the watch, its balance wheel, spiral, and the escapement, are placed within a carriage that makes one rotation per minute so as to cancel out rate errors resulting from gravitational forces. Modern technology played a prominent role, as well, in the tourbillon design as the carriage is made of titanium and the balance wheel’s spiral as well as the escape wheel are fashioned in silicon. As the tourbillon mechanism has been redesigned, the cage is driven by a peripheral gear. The tourbillon and the sum of its components seemingly fly in space. The mainspring barrel was not overlooked in the quest to reduce thickness. By creating a groove around the barrel drum, held in place by three bearing assemblies located outside of it, Breguet’s designers were able to reduce thickness by 25%. The power reserve, to match with the other indications on the dial, is shown by gauge-type indicator at VIII o’clock.

The ingenuity of this spectacular model is accentuated by the precious expertise of the watchmakers and artisans of Breguet. 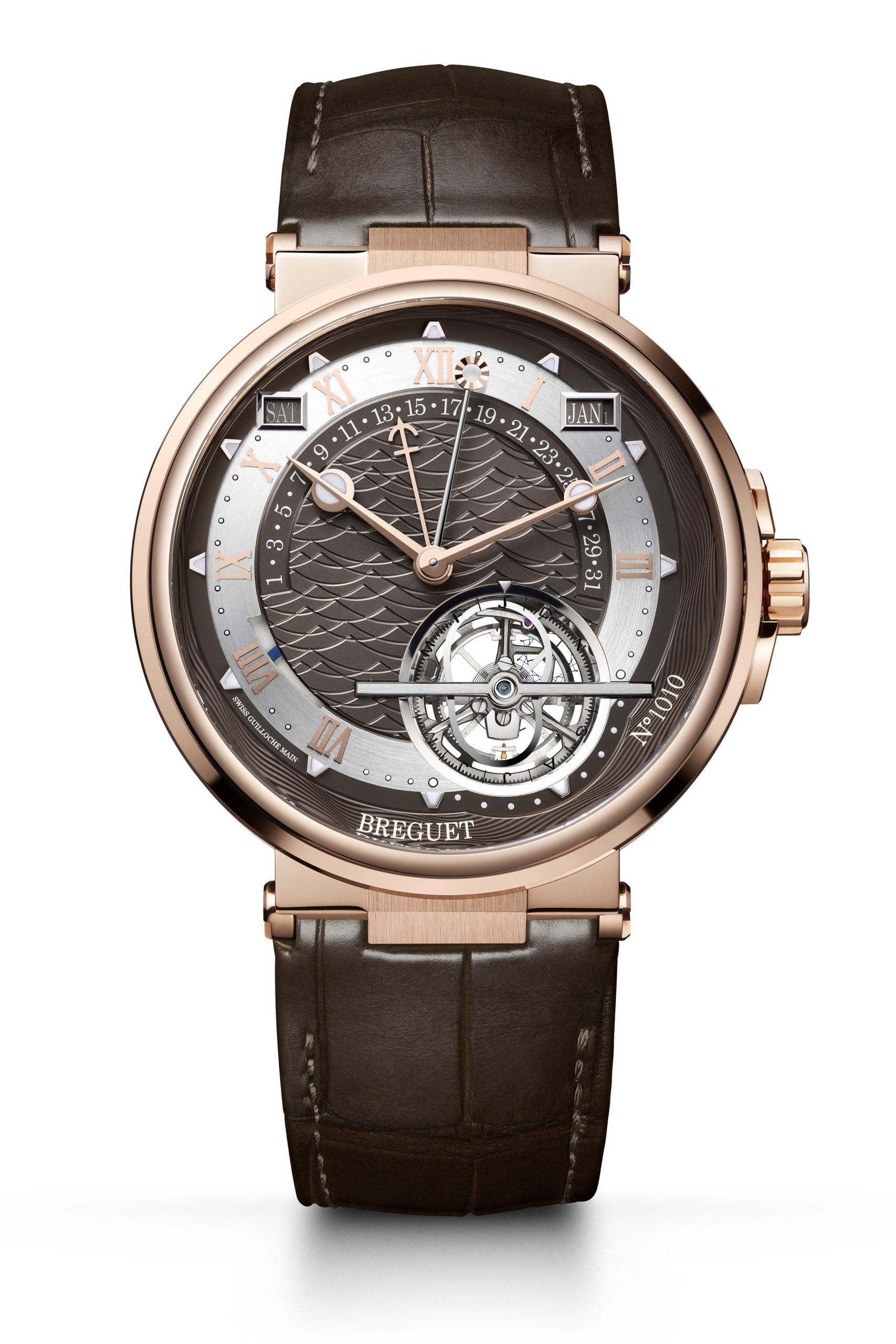 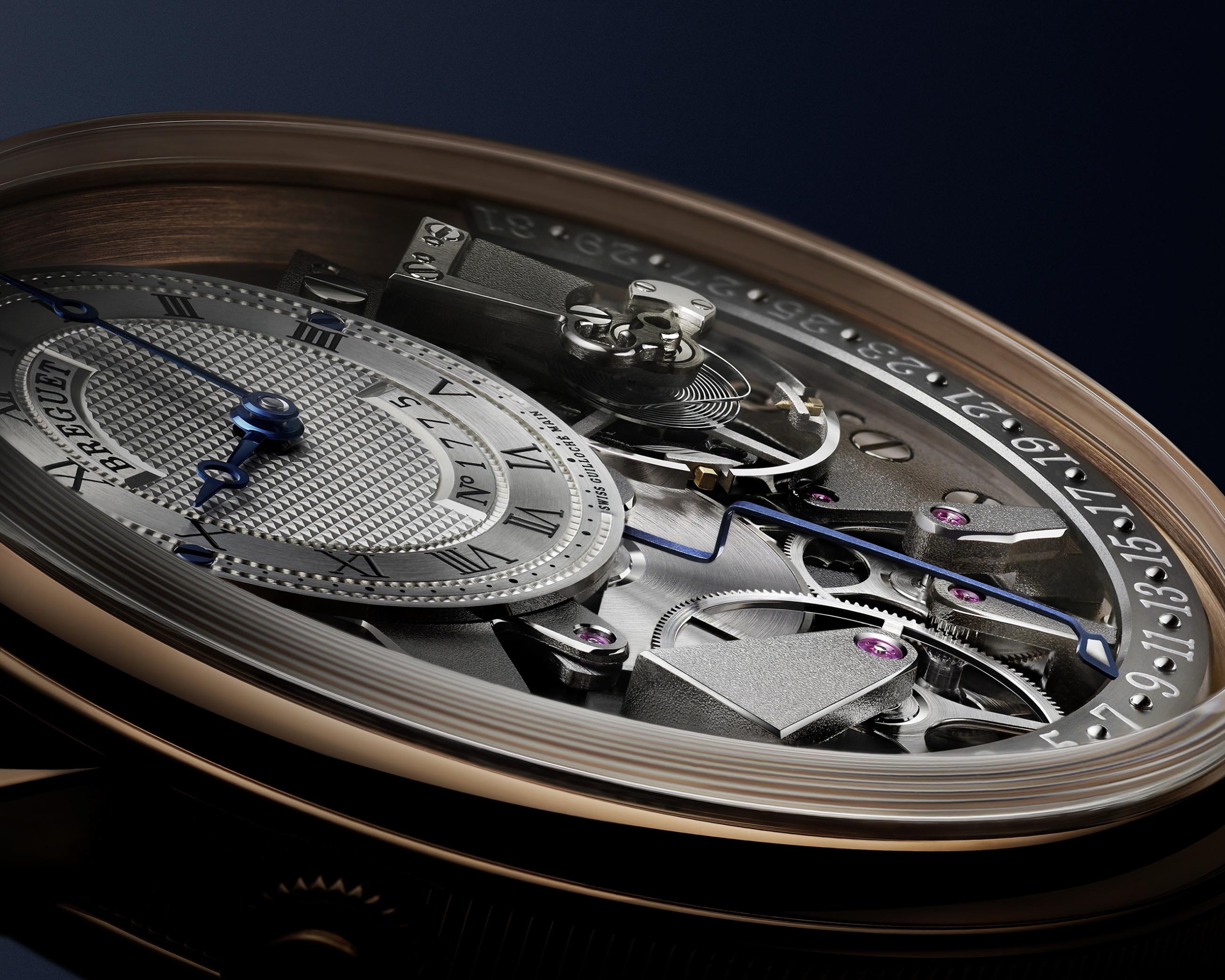 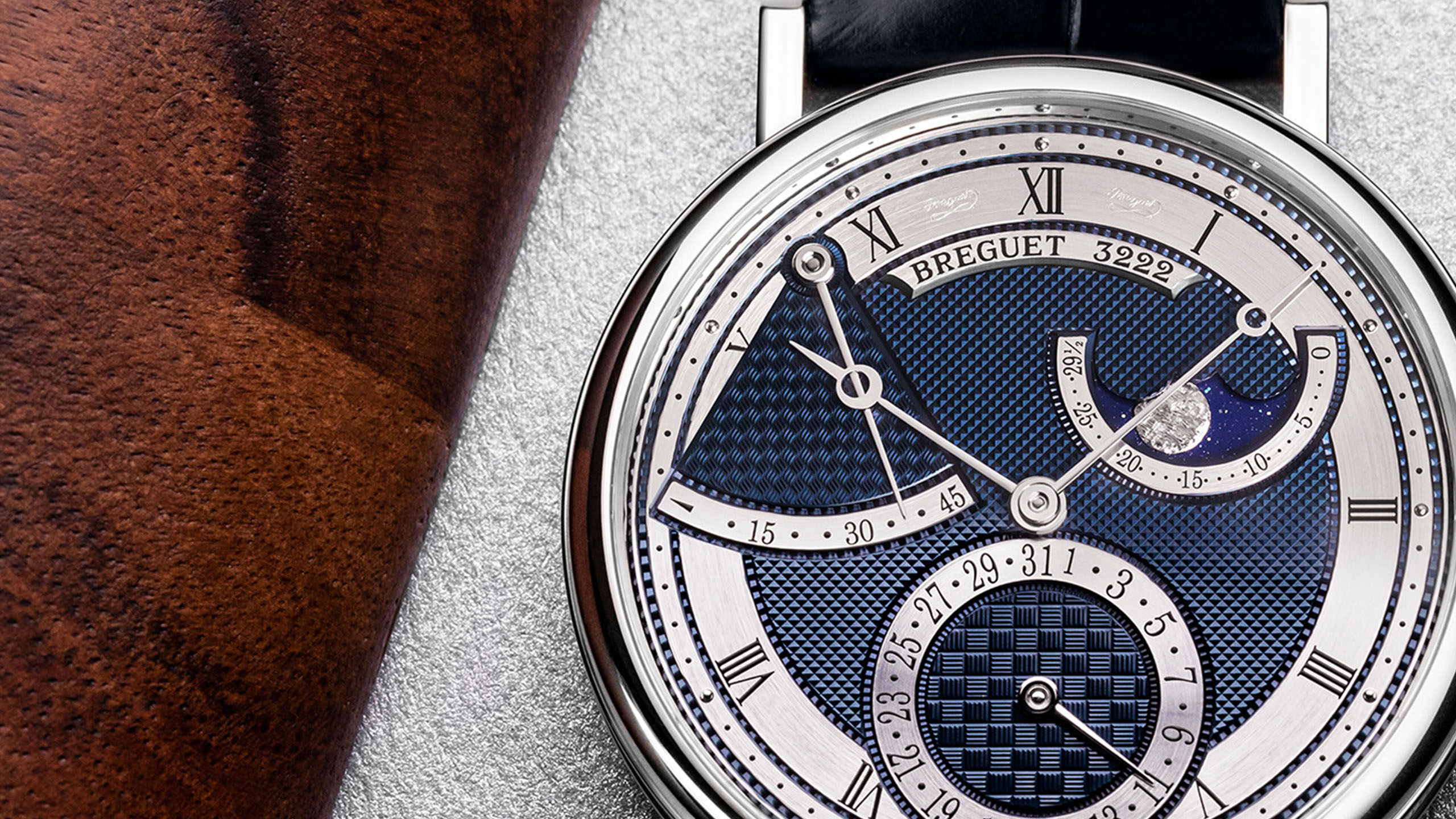