A flourish of colour, sparkle and sublime craftsmanship 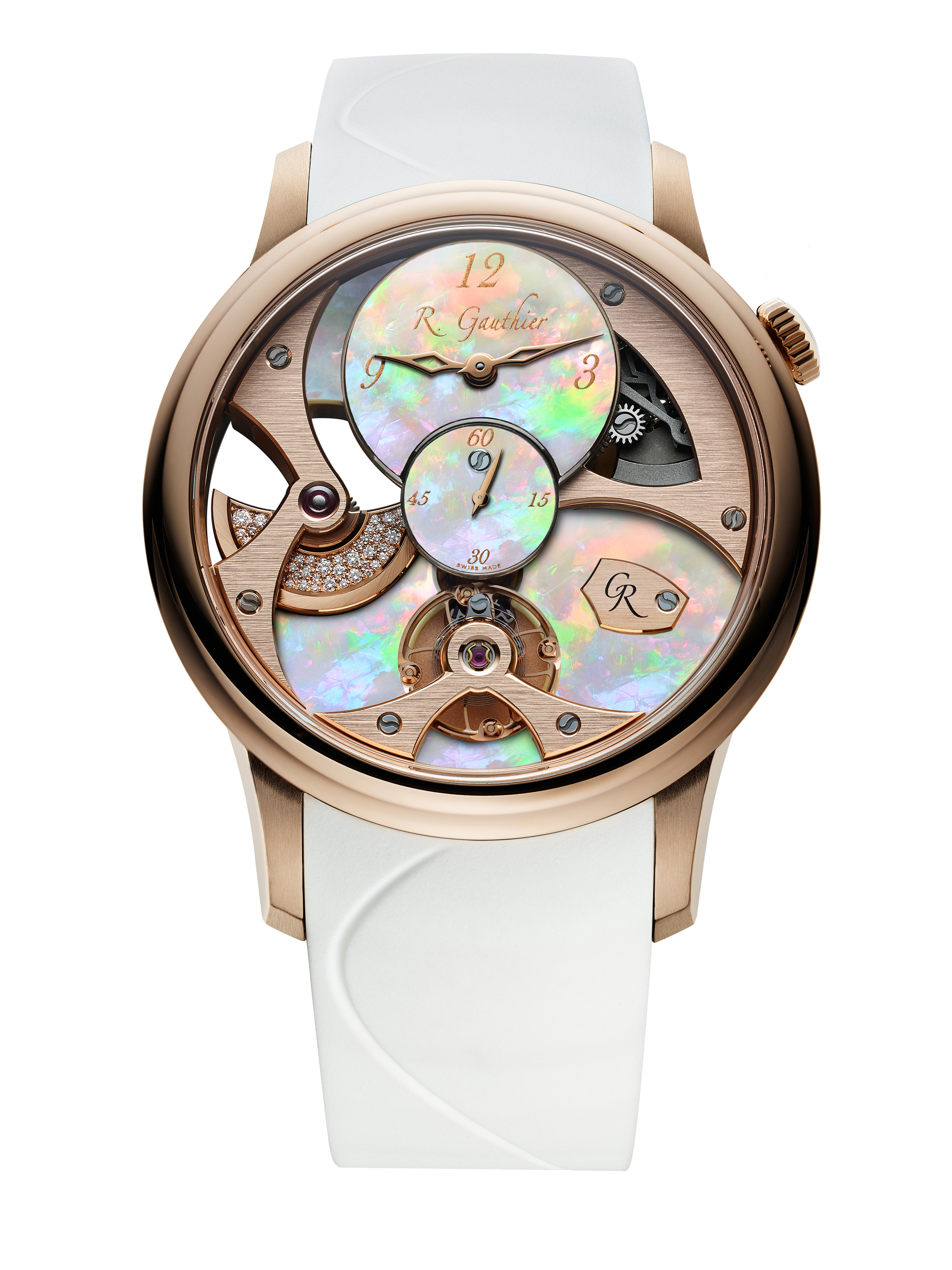 The hour-minute subdial, small seconds and mainplate cover are made out of semi-transparent Australian crystal opal that has been skilfully finished by hand. This gemstone exhibits flashes of pink, green, purple and turquoise in a majestic play of colour. Powering the indications is an in-house, automatic calibre that boasts a 22k gold bidirectional micro-rotor, the front of which is snow set with brilliant-cut diamonds of varying sizes. The scintillating micro-rotor is framed by a cut-out in the opal-adorned mainplate. It turns smoothly and inaudibly between two bridges, each fitted with a friction-minimising, wear-resistant ruby bearing. In whichever direction the micro-rotor sways, it winds a serially operating double mainspring barrel offering 80 hours of power at full wind.

The glorious opal subdials and mainplate cover set off the red gold hands, gilded balance wheel and red gold treated plaquette and bridges that are hand-bevelled and straight-grained, while the arcs of the bridges neatly marry with the inside curve of the red gold case. The case’s 39.5mm diameter, combined with the white natural rubber strap that mirrors the contours of the lugs, provides a snug fit on slender wrists. Other design details of the case include a lip in the caseband that flares out to join with the bezel; the crown positioned at 2 o’clock to free up space for wrist movement; and the bombé sapphire crystal which rises so that its highest point is over the hour-minute display, the de facto centre of the dial. More of the movement can be admired through the display back. Here, the micro-rotor can be seen engaging the visible train of gears, beginning with the reversing gear that gives the mechanism its bidirectionality. The gears and ratchet wheels are notable for their circular spokes which have been bevelled. Finally, the golden bridges – which feature hand-made, hand-polished bevels and jewel countersinks – are secured in place using Romain Gauthier’s in-house screws with S-slot heads. The sweeping shapes of the bridges contrast with the linearity of the straight-grained finishing and four plaquettes.

The semi-transparent crystal opal used to make the dial and mainplate cover of Insight Micro-Rotor Lady Opal is from the town of Coober Pedy in South Australia, often described as the opal capital of the world. It was collected at source by a connoisseur of rare gemstone almost half a century ago. This precious opal is regarded as the finest thanks to its highly stable internal structure that makes it diffract light, resulting in a resplendent play of colour. Its compactness and low porosity mean its vibrant appearance will remain constant over time. Once the raw opal is carefully selected, a wire saw is used to remove an ultra thin slice which is then fixed onto a heated baseplate with tree resin, after which the outline of the hour-minute subdial, small seconds and mainplate cover are cut using a three-axe machining centre. The one-piece mainplate cover bears a complex shape with a figure of eight cut in the centre to accommodate the small seconds and balance wheel.

The lapidary then fixes the slice onto a brass block with resin before rubbing it by hand on a glass board covered with a mixture of diamond powder and water in order to make the opal the right thickness – 0.28mm for the subdials and 0.35mm for the mainplate cover. In fact, the lapidary leaves 0.06mm more than is needed so he has enough opal to work with for the polishing stage which consists of pressing the opal gently against a turntable covered with fine felt and white cerium oxide solution. Given that each opal dial and mainplate cover is different, and each arrangement of the diamonds decorating the micro-rotor is different, no two Insight Micro-Rotor Lady Opals look the same.

In-house automatic movement
Developed, produced, decorated, assembled and regulated at Manufacture Romain Gauthier in the Vallée de Joux, Switzerland, Insight Micro-Rotor Lady Opal’s movement has been designed to be highly visible so the observer can acquire an immediate appreciation of the mesmerising mechanics and immaculate hand-finishing, hence the moniker “Insight”.

The bidirectionality of the micro-rotor is accomplished via a reversing gear. The axis of this gear glides side to side, guided by an aperture cut within two arc-shaped steel plates that have been black-polished to enhance the gear’s rotation and lateral movement. When the micro-rotor changes direction, it drives the toothing of the reversing gear in the opposite direction, making the reversing gear slide this way too. Given the relative weight of the micro-rotor, Romain Gauthier has chosen to sandwich it between two bridges for superior stability, rather than designing a ‘flying’ rotor supported by just one bridge from beneath. Both ends of the micro-rotor axis turn in a ruby-lined pivot hole. The rubies have a high wear resistance and low coefficient of friction helping to create a silent, fluid rotation of the micro-rotor compared to, say, metal ball-bearings, which can entail wear and noise. The two mainspring barrels offer 80 hours of energy when fully wound. The barrels are in series for more constant power to the regulator that features the Romain Gauthier balance wheel featuring curved arms and calibrated eccentric weights, as well as a hand-assembled pallet lever that is triangular for more rigidity. Last but not least, the superlative movement decoration includes hand-made and hand-polished bevels, hand-frosting, circular-graining, straight-graining and snailing, in addition to hand-made and hand-polished jewel countersinks. 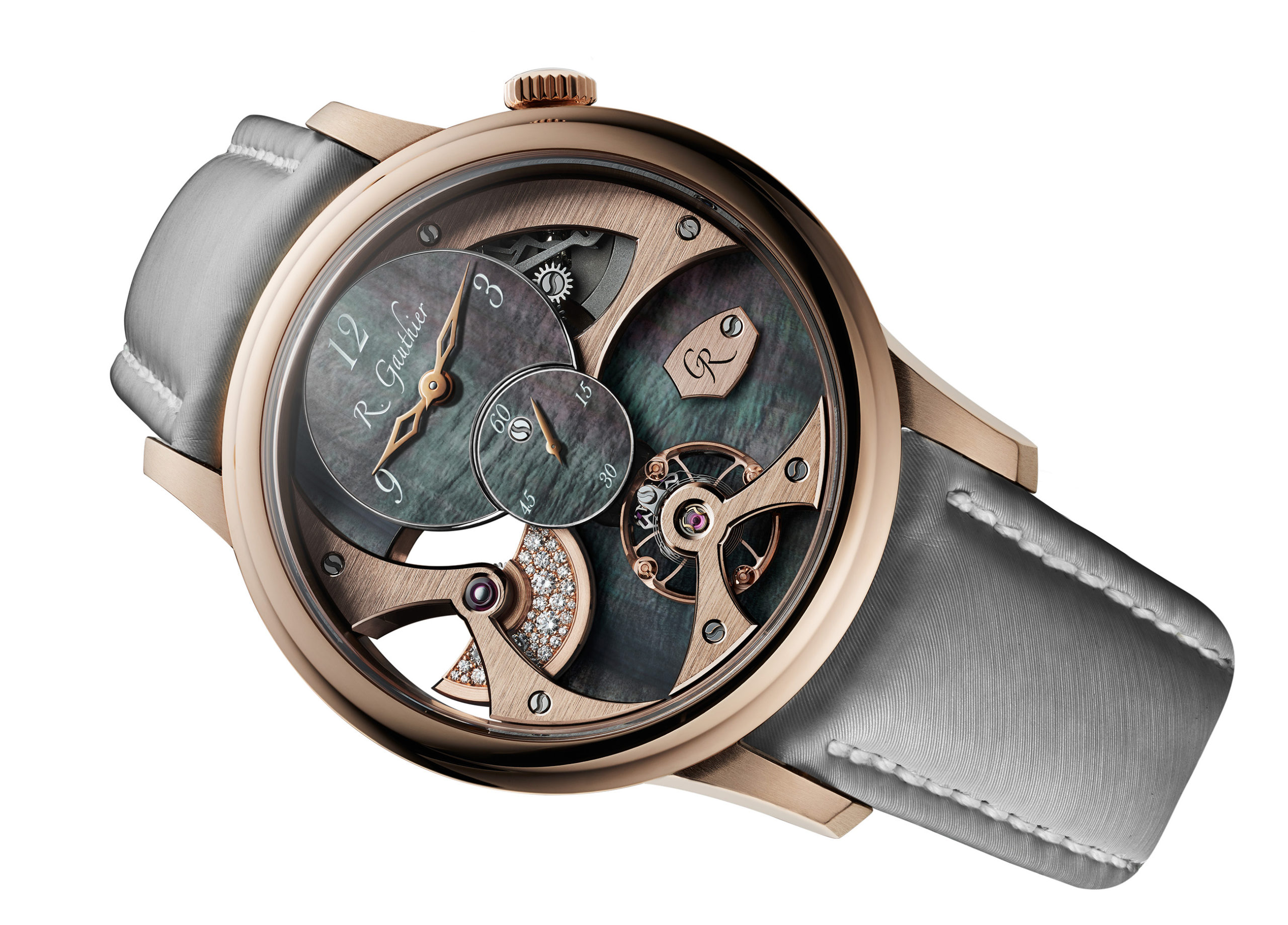