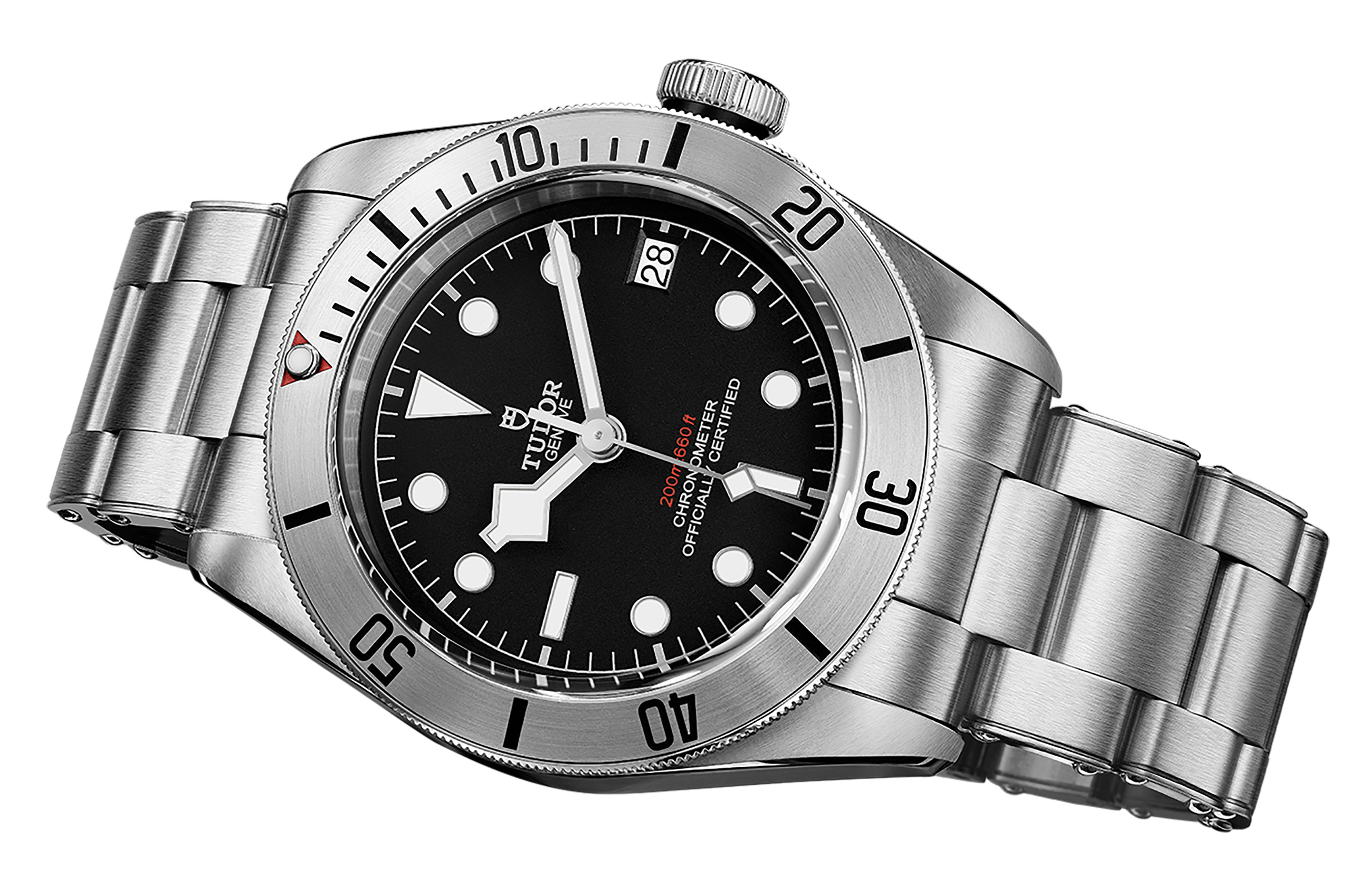 An emblematic model celebrating 60 years of TUDOR divers’ watches with extraordinary craftsmanship, this new model with an all steel look enriches the Heritage Black Bay collection. In this version, Black Bay lines and proportions are retained, while the disc of the rotating bezel is machined from steel and circular satin-brushed for a matt appearance and a highly functional overall effect, embracing the distinctness of the TUDOR divers’ watch. 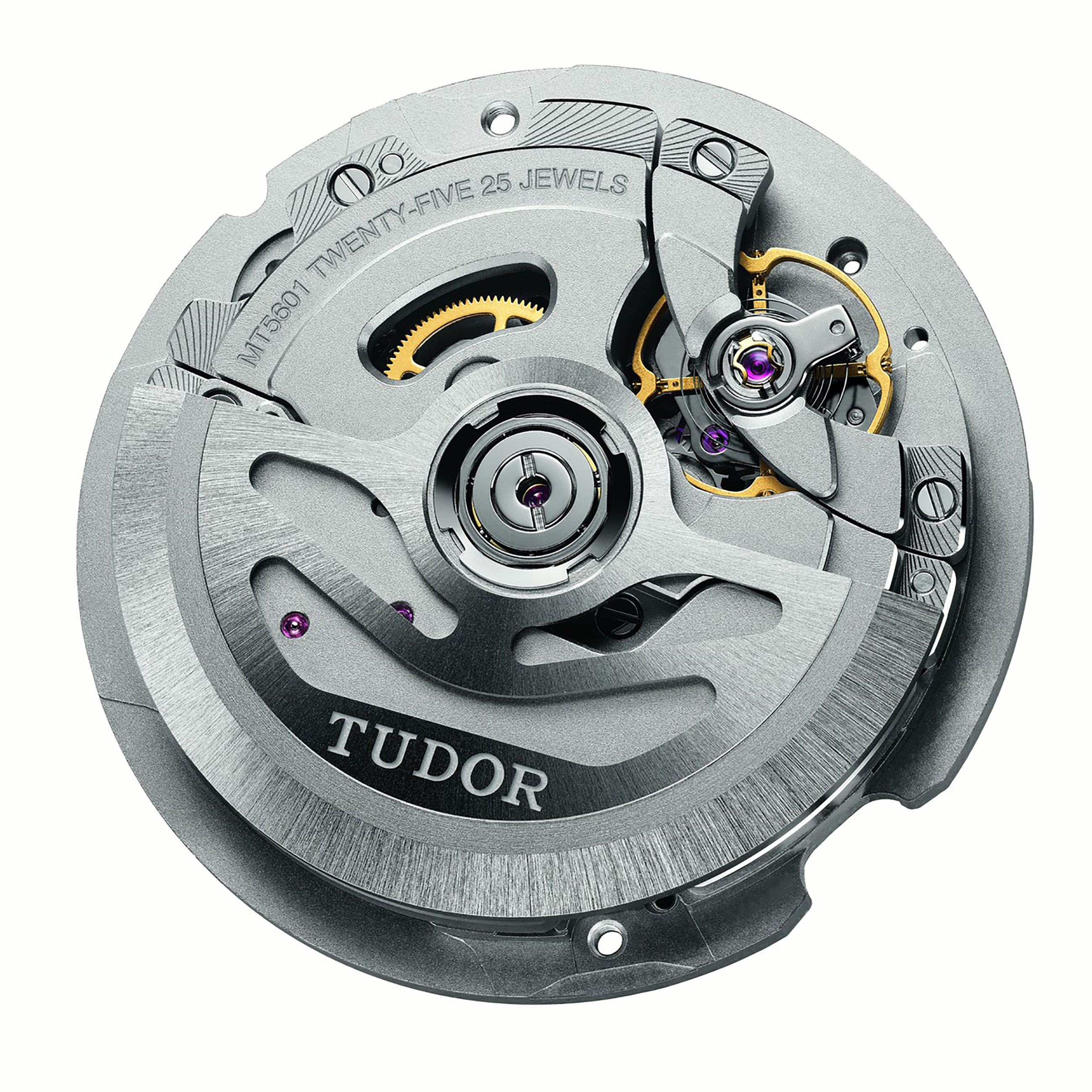 The Manufacture Calibre MT5612
This is a variation of the movement presented by TUDOR in 2015 and has been developed for the Heritage Black Bay Steel model. A date function features for the first time in the Black Bay family, adding to the hour, minute and second functions that are a feature on of all Black Bay models. A high-performance calibre of superb precision and proven robustness. With a 70-hour power reserve, a wearer can take off the watch on Friday evening and put it back on again on Monday morning without having to reset and wind it. Beating to a frequency of 28,800 beats/hour or 4Hz, the movement is regulated by a variable inertia oscillator with silicon balance spring. This is held in place by a traversing bridge guaranteeing its robustness. Furthermore, the movement is certified by the Swiss Official Chronometer Testing Institute (COSC). 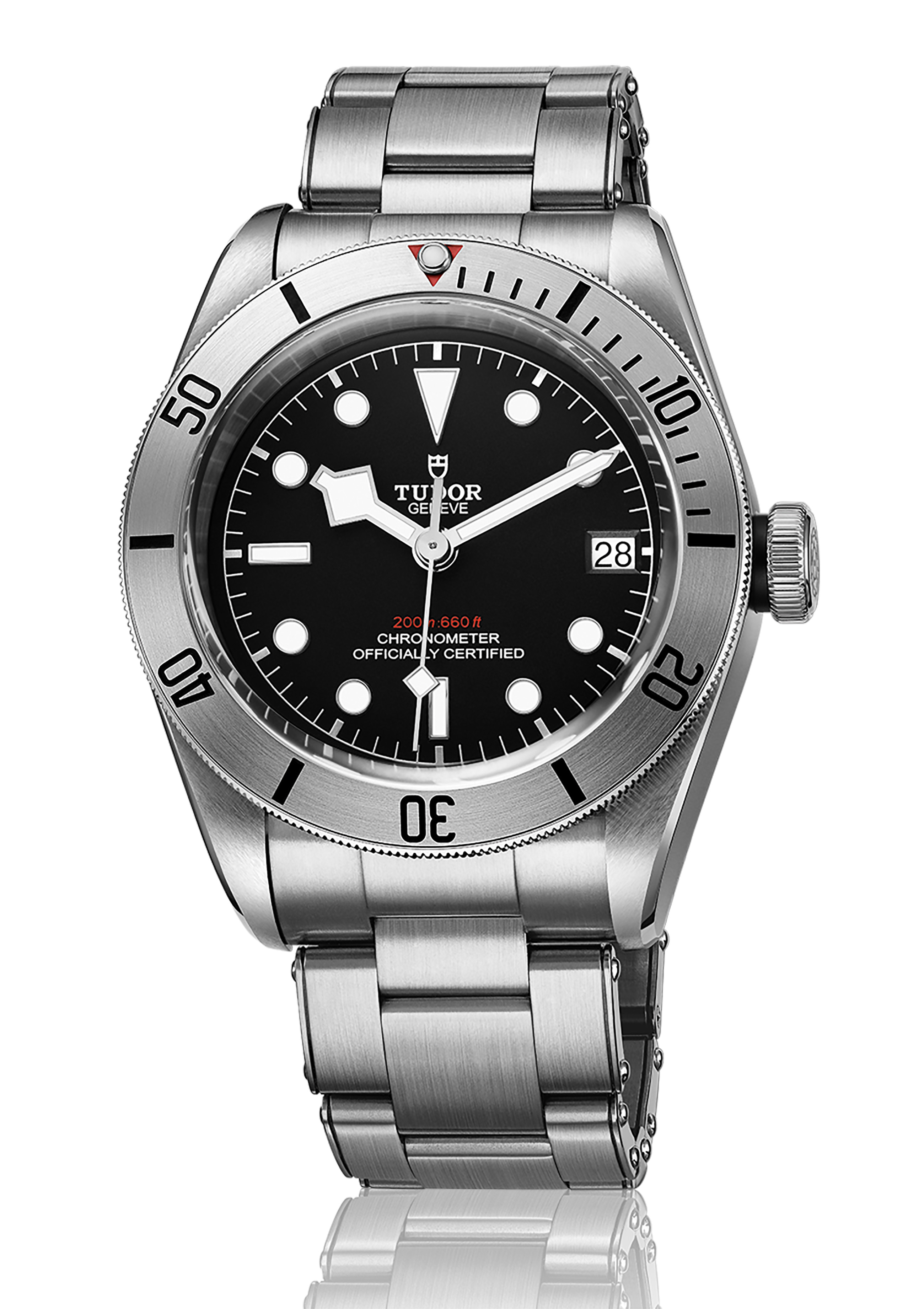 A «riveted» bracelet
The bracelet of the Heritage Black Bay Steel model is inspired by the folding riveted bracelets of the TUDOR watches produced in the 1950s and 1960s. These were famous for having rivet heads for attaching the links, shown on the side of the bracelet. The links also had a distinct stepped construction. These two aesthetic details are incorporated into the bracelet of the Heritage Black Bay Steel model, integrating modern manufacturing methods using solid links. Available in two designs, it also comes on a black aged leather strap with folding clasp. Both versions come with an additional khaki green fabric strap. Made using the Jacquard technique, a traditional method achieved by a hundred-year-old family business from the St-Etienne region of France, this strap is a signature feature of TUDOR’s Heritage line.

The origins of the Black Bay inspiration
Tudor derived the characteristic aesthetic elements of the Heritage Black Bay Steel model from its history. The overall shape, as well as the domed dial and crystal, come from the first TUDOR divers’ watches. The prominent winding crown and the red triangle of the bezel are features of the famous reference 7924 from 1958, the first TUDOR watch to be waterproof to 200 metres, dubbed the Big Crown. The line of red text on the dial, highlighting the maximum guaranteed water resistance, is a rarity seen on certain 7923 references from 1955. Finally, the characteristic angular hands known as snowflake are typical of the watches delivered to the French Navy in the 1970s.

The TUDOR divers’ watch
The history of the TUDOR divers’ watch dates back to 1954 with the launch of reference 7922. The first in a long line of ergonomic, legible, accurate and robust divers’ watches, it perfectly embodies the approach formulated by the American architect Louis Sullivan, who stated that the form of an object must follow its function. Furthermore, it laid down the aesthetic and technical foundations of an ideal divers’ watch; an understated, functional and reliable tool. The sixty years that followed the launch of the original 7922 saw the constant improvement of the TUDOR divers’ watch. Each model gained unanimous acclaim from professionals in the field, including some of the greatest military navies in the world.

The Heritage line
A key characteristic of the TUDOR Heritage line is the unique creative process that began in 2010 with the presentation of the TUDOR Heritage Chrono model, a free interpretation of the brand’s first chronograph dating from 1970. Since then, some of the most important references in the history of TUDOR have been reworked within the Heritage line. Unlike a traditional identical re-edition of a classic, the models in this line combine key aesthetics from history with modern day watchmaking. The standout Black Bay family, which forms part of the Heritage line, is a key example of this approach, bringing together over 60 years of TUDOR divers’ watches. 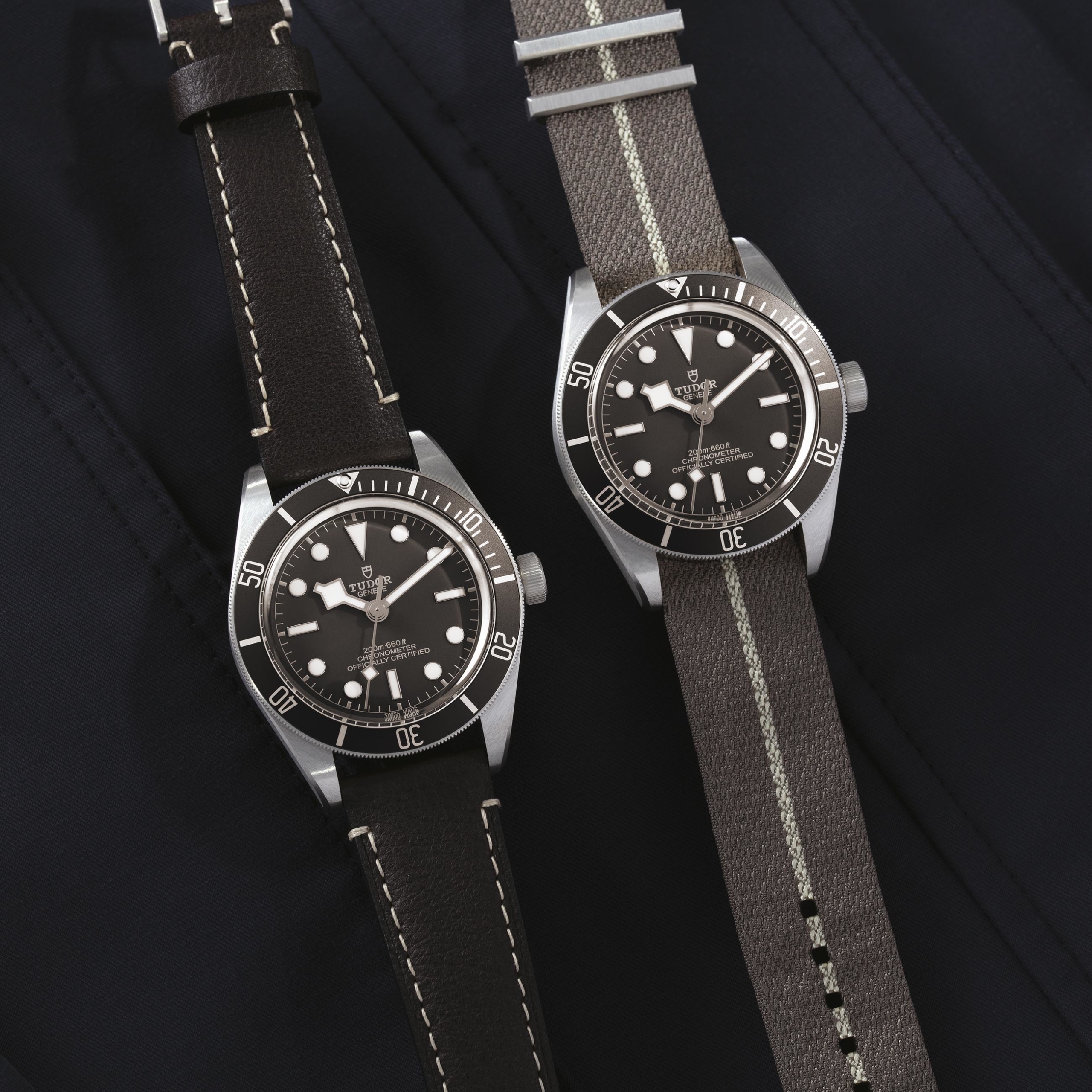 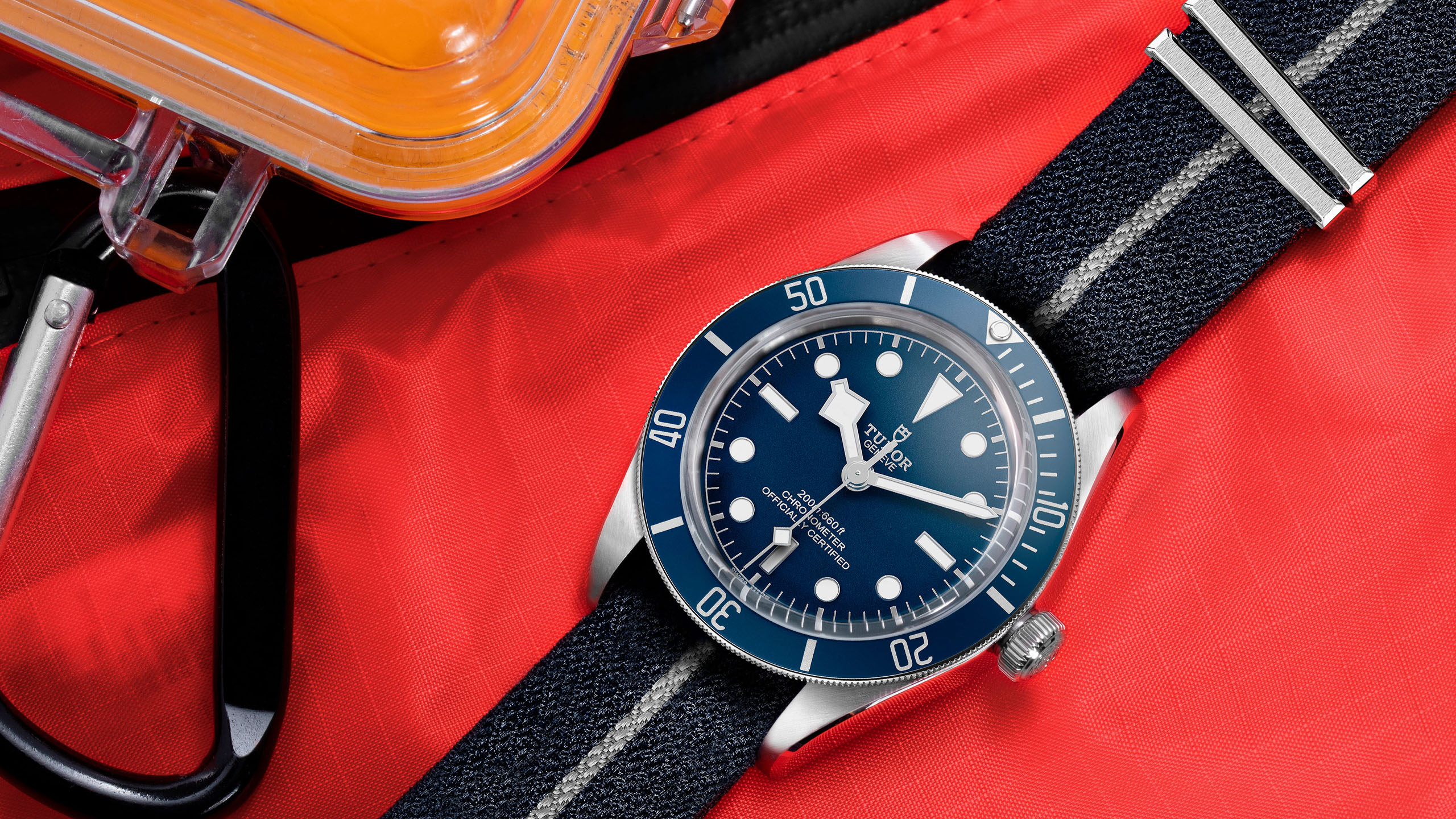 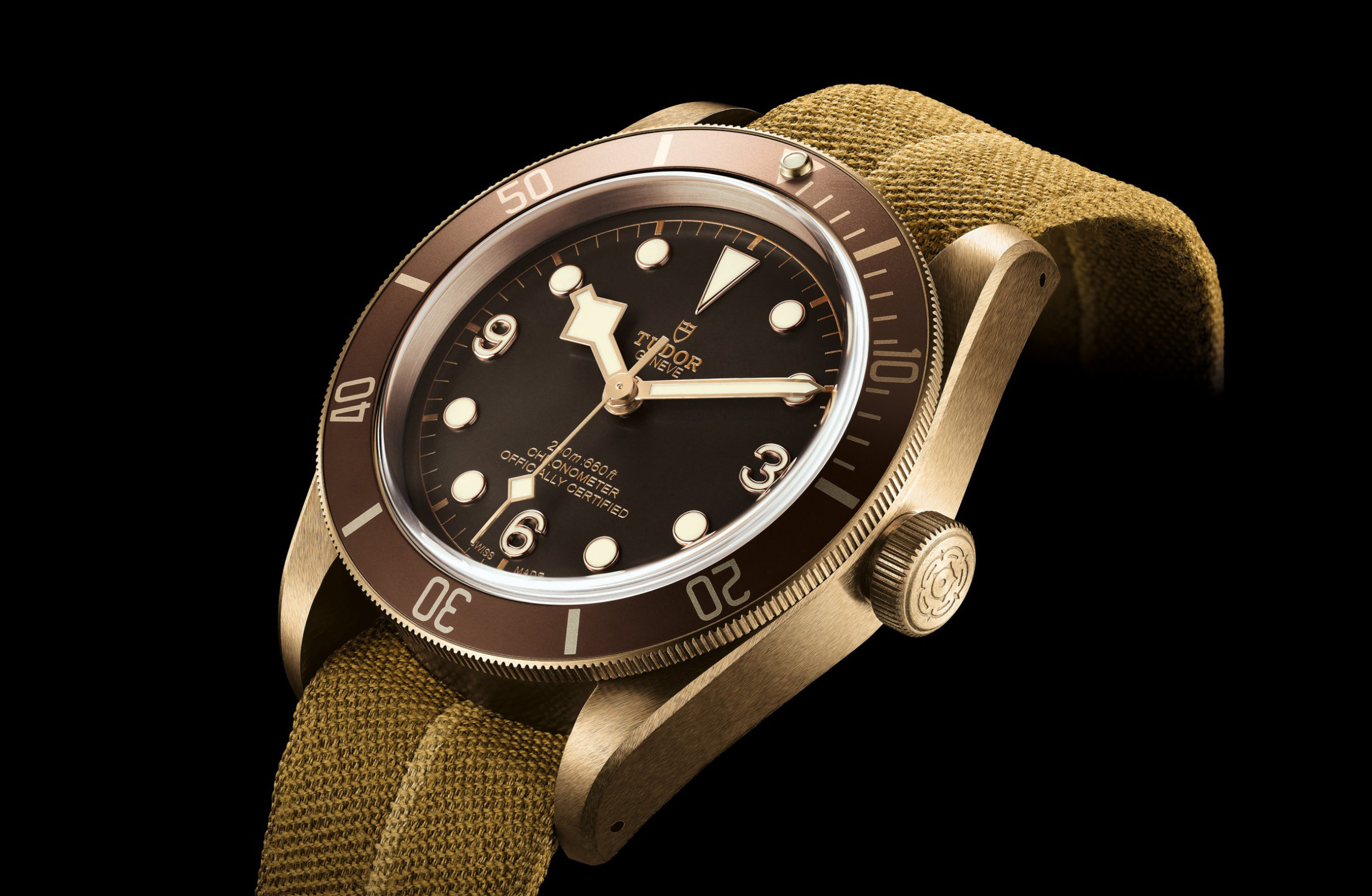