TAG Heuer releases a 188-piece limited edition of a redesigned vintage Heuer Carrera to mark Jack Heuer’s birthday. To pay tribute to his visionary contribution to the brand’s 160-year longevity 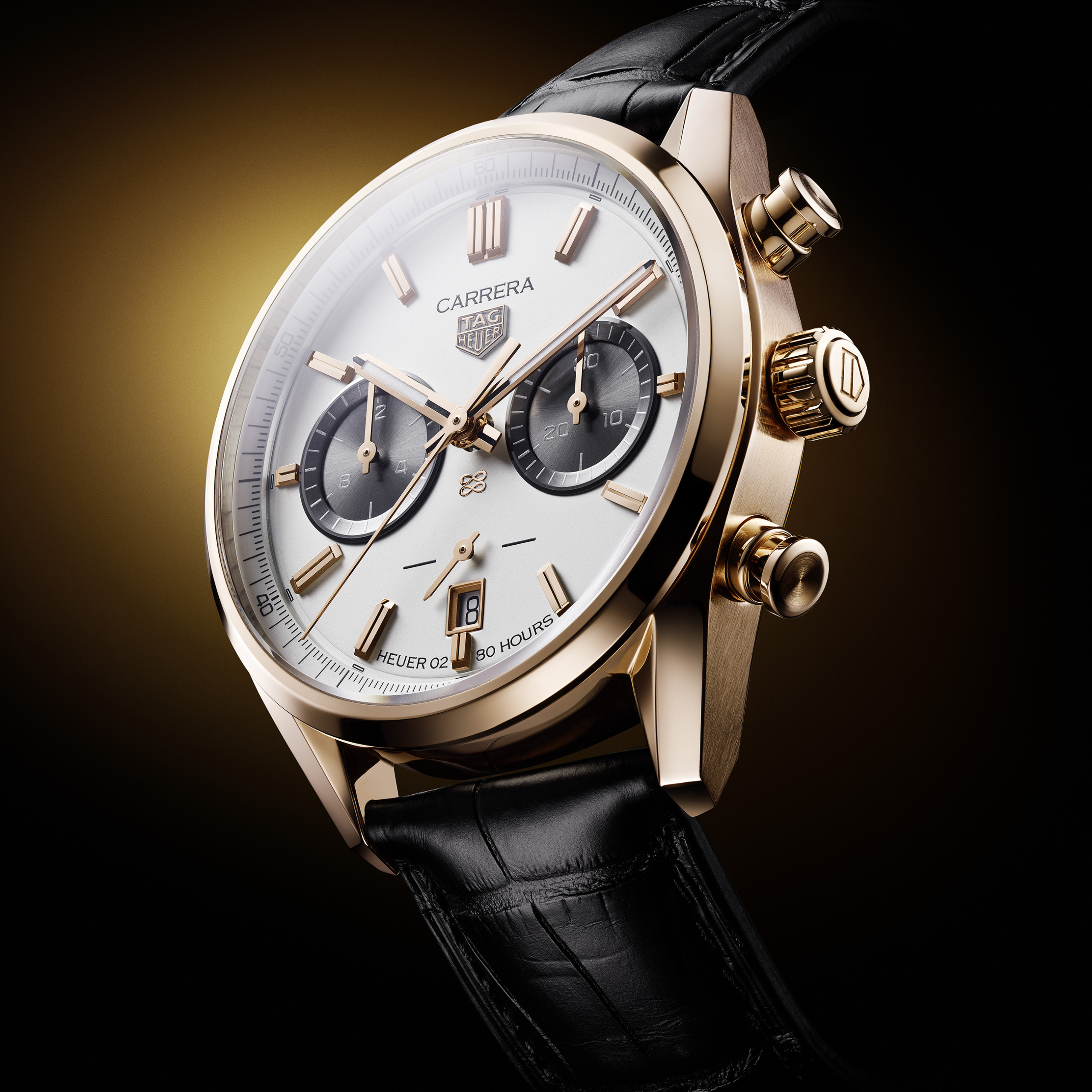 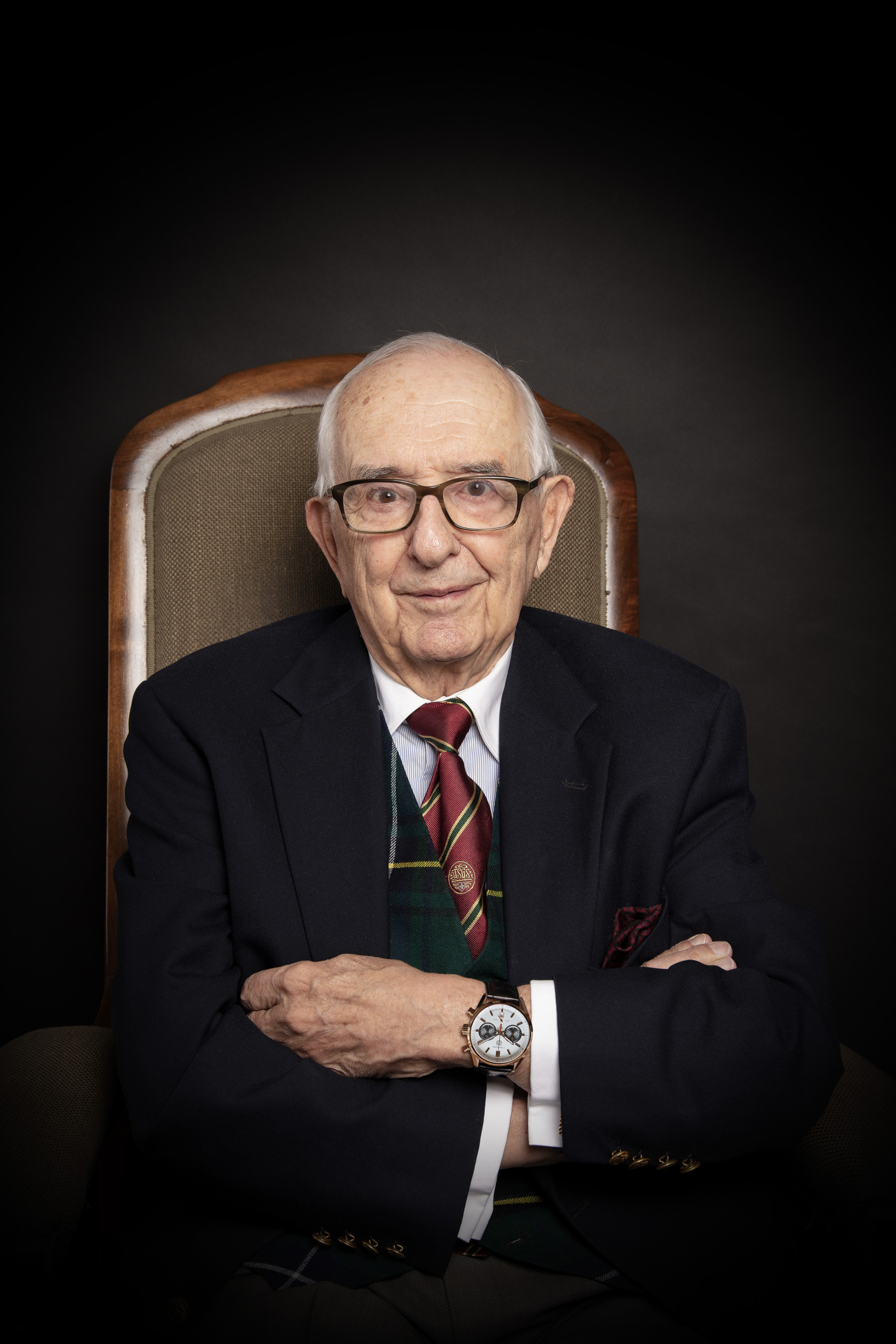 Inspired by Jack’s favourite Heuer watch (the iconic vintage Heuer Carrera 1158CHN), the details of the TAG Heuer Carrera Chronograph Jack Heuer Birthday Gold Limited Edition recalls the story of Jack and TAG Heuer. The elegant chronograph pays tribute to the Heuer style, as well as Jack Heuer’s love of detail and precision. It is made from 18K rose gold, his favourite material. One that he specially chose for the watches he gifted to racing drivers to confer the highest value upon their precious good luck tokens. This new watch features Jack’s motto “Time never stops, why should we?” on the oscillating mass of its in-house manufacture Heuer 02 movement, and bears the double symbol of infinity on the dial and his signature on the strap. 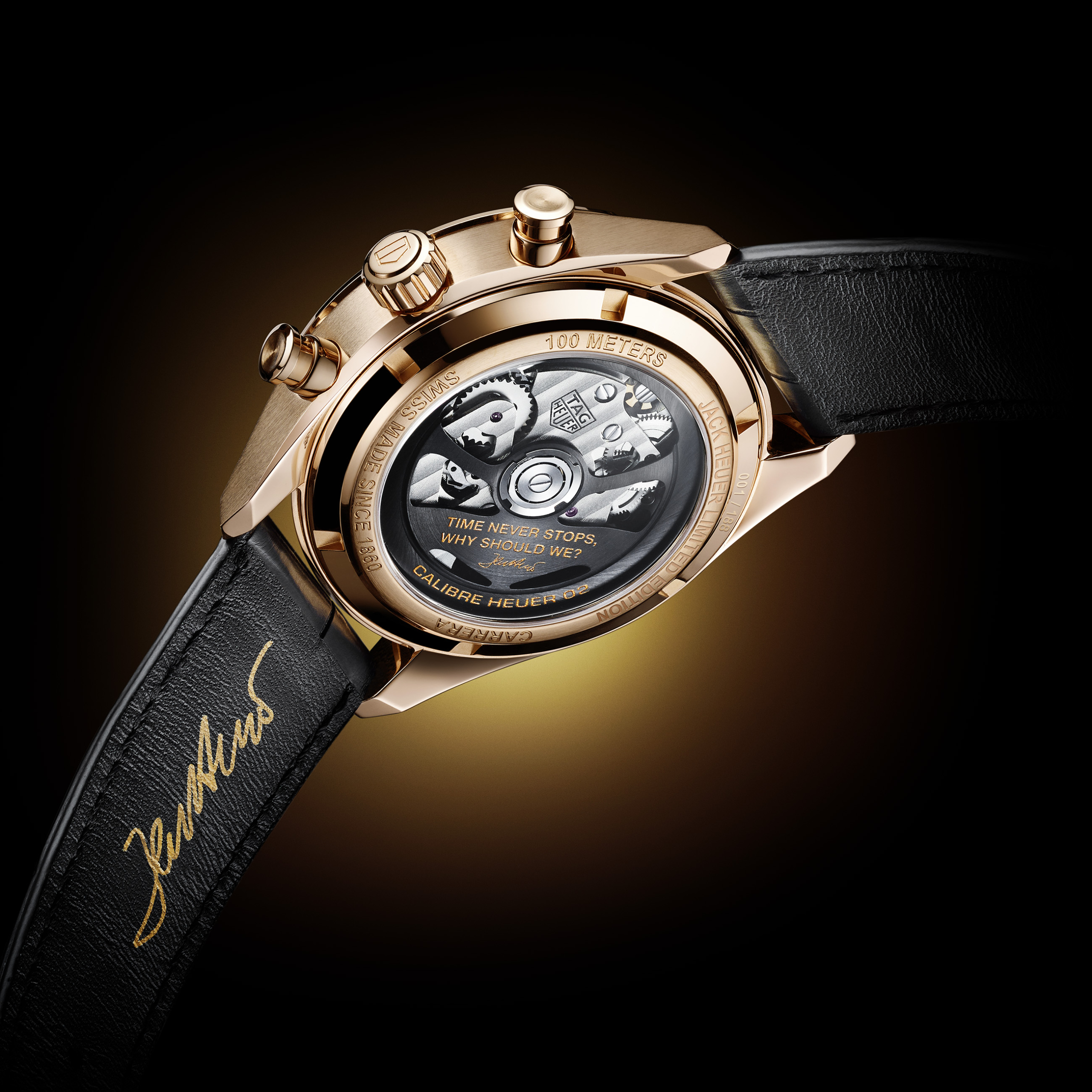 Launched in 1963, the TAG Heuer Carrera is not only Jack Heuer’s favourite collection, but also the first timepiece that he created entirely, choosing and registering its name as well as designing its aesthetics down to the smallest details. The Carrera was a watch made for professional racing drivers that featured a highly legible, minimalist dial that has helped forge its legendary status. When he was told about the treacherous Carrera Panamericana race, the word carrera resonated deeply with Jack. The word means “road”, “race”, “journey” or “career” in Spanish, and it shaped the destiny of a watch that is now a true icon. 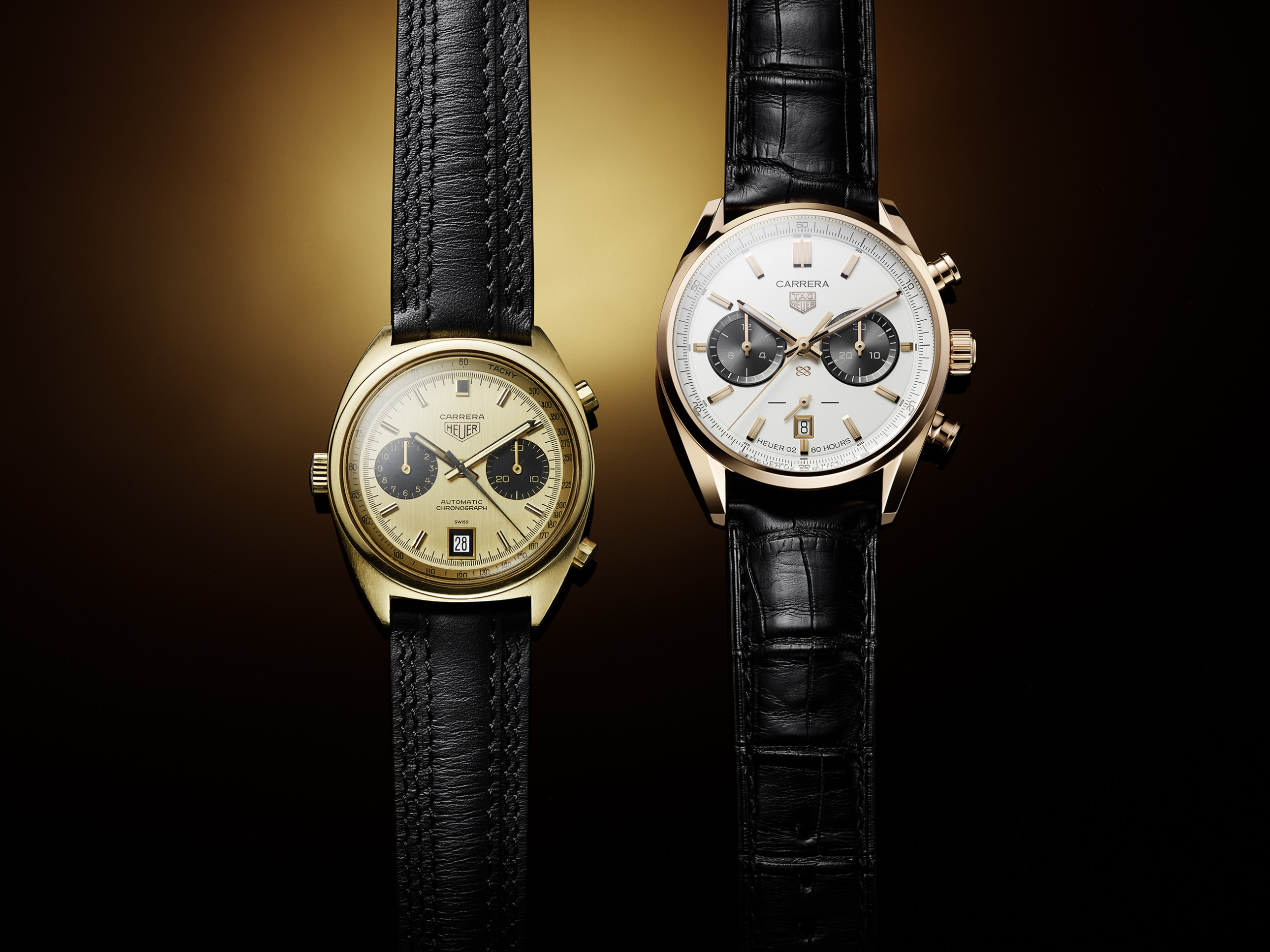 Among the TAG Heuer Carrera models, there is one that stands apart in Jack Heuer’s heart: the all-gold Heuer Carrera 1158CHN dating back to the 1970s – an iconic vintage watch that inspired the TAG Heuer Carrera Chronograph Jack Heuer Birthday Gold Limited Edition. Made of 18K rose gold, this anniversary piece marks the comeback of this precious metal to the TAG Heuer collections. Above and beyond its enduring value, gold embodies the enduring link between Jack, TAG Heuer, motorsports and the greatest drivers of all time. In the 1970s, Jack Heuer started a tradition of presenting an 18K gold Heuer Carrera for good luck to Ferrari Formula 1 drivers. Legends such as Ronnie Peterson, Niki Lauda and Clay Regazzoni. All during the partnership between Heuer and Ferrari. Engraved with the driver’s name and blood type on the case back, these Heuer Carrera 1158CHN models have become highly sought-after collector’s items and symbols of the golden age of racing.

Framed by a 42 mm 18K rose gold case, the TAG Heuer Carrera Chronograph Jack Heuer Birthday Gold Limited Edition features a silver opaline dial with a duo of applied stylised infinity loops in the centre of the dial, symbolising Jack’s birthday and recalling his infinitely precious legacy to the brand. True to the aesthetics of the original 1158CHN Heuer model. Only the two sunray brushed chronograph subdials at 3 and 9 o’clock appear in contrasting black as a nod to vintage racing timepieces.

As for the counter at 6 o’clock, which did not exist in the original version, it elegantly blends in tone on tone with the dial. The silhouette of the redesigned date display and the hands. The size has been perfectly adjusted to that of the hour-markers, are two subtle details that come straight from Jack’s vision and eye for clean and clear dial design, and they add the final touch to the aesthetic balance of this timepiece. A black alligator strap bears Jack Heuer’s signature in gold lettering.

This limited-edition model is equipped with the Calibre Heuer 02 manufacture movement. It is made of 168 components, including a column wheel and a vertical clutch, and boasts an impressive power reserve of 80 hours. The visible oscillating mass engraved with Jack Heuer’s motto “Time never stops, why should we?” expresses his resilient mindset and seemingly boundless energy, and reminds us of the enduring sense of eternity embodied by the TAG Heuer Carrera collection. 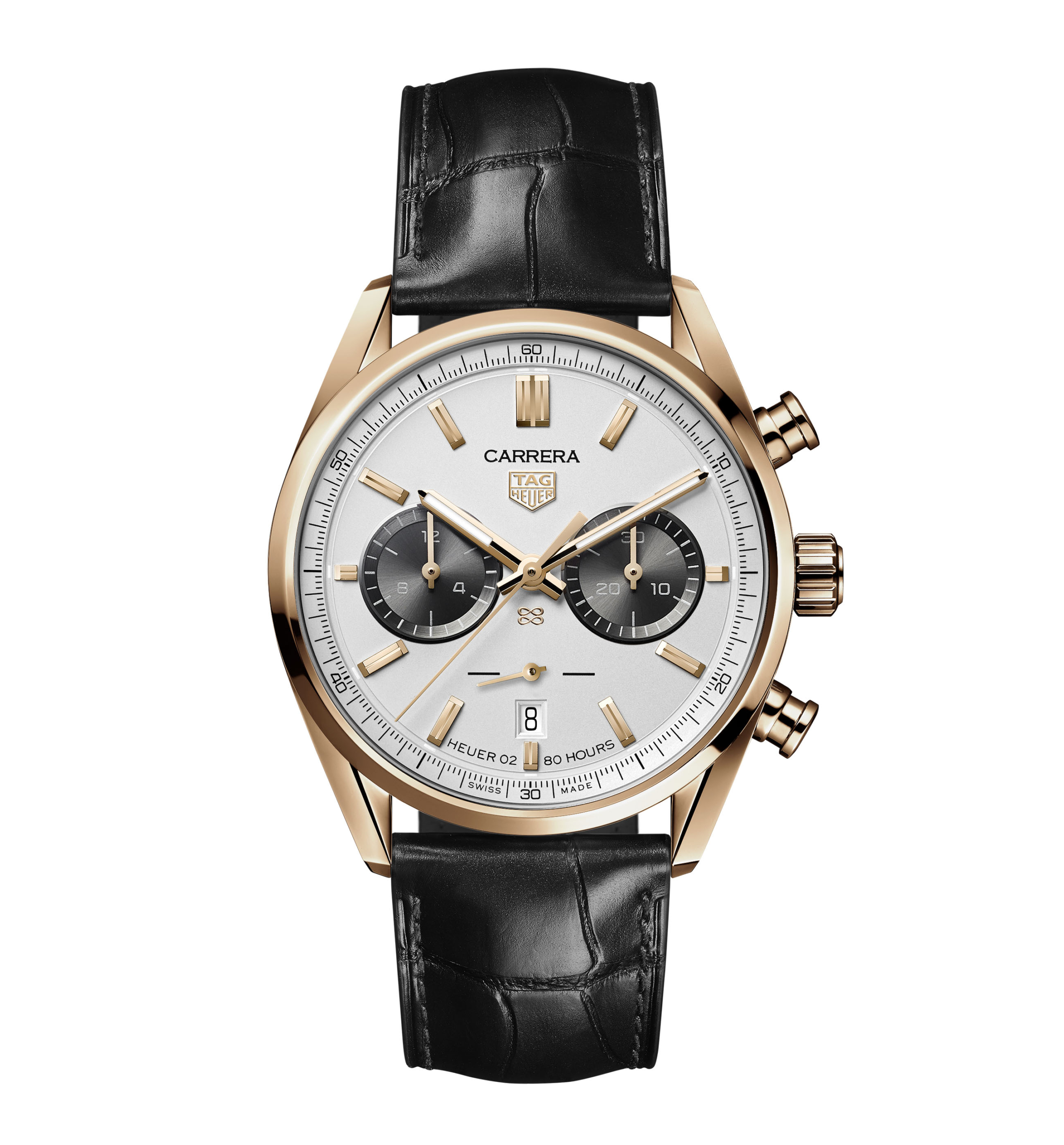 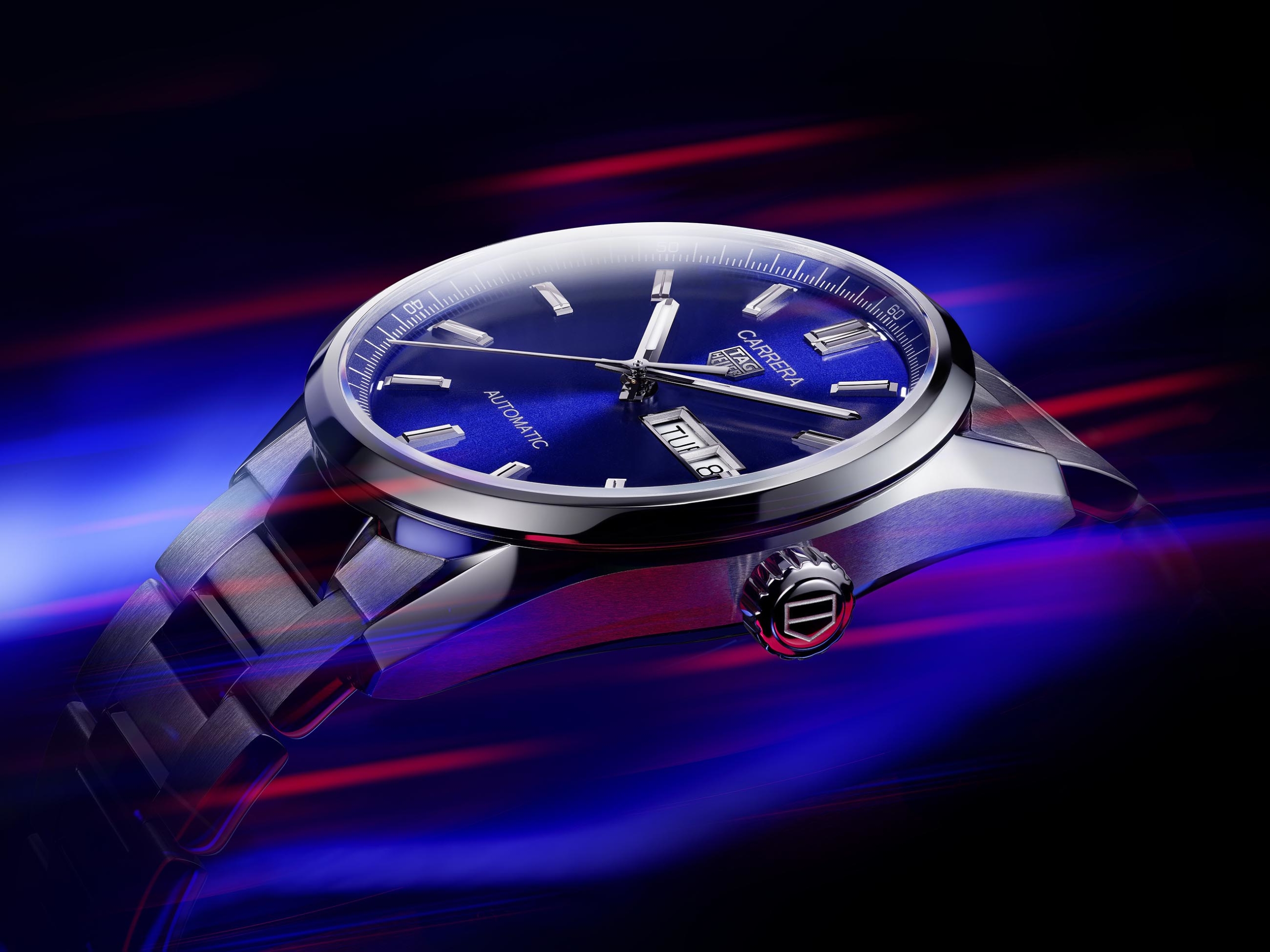 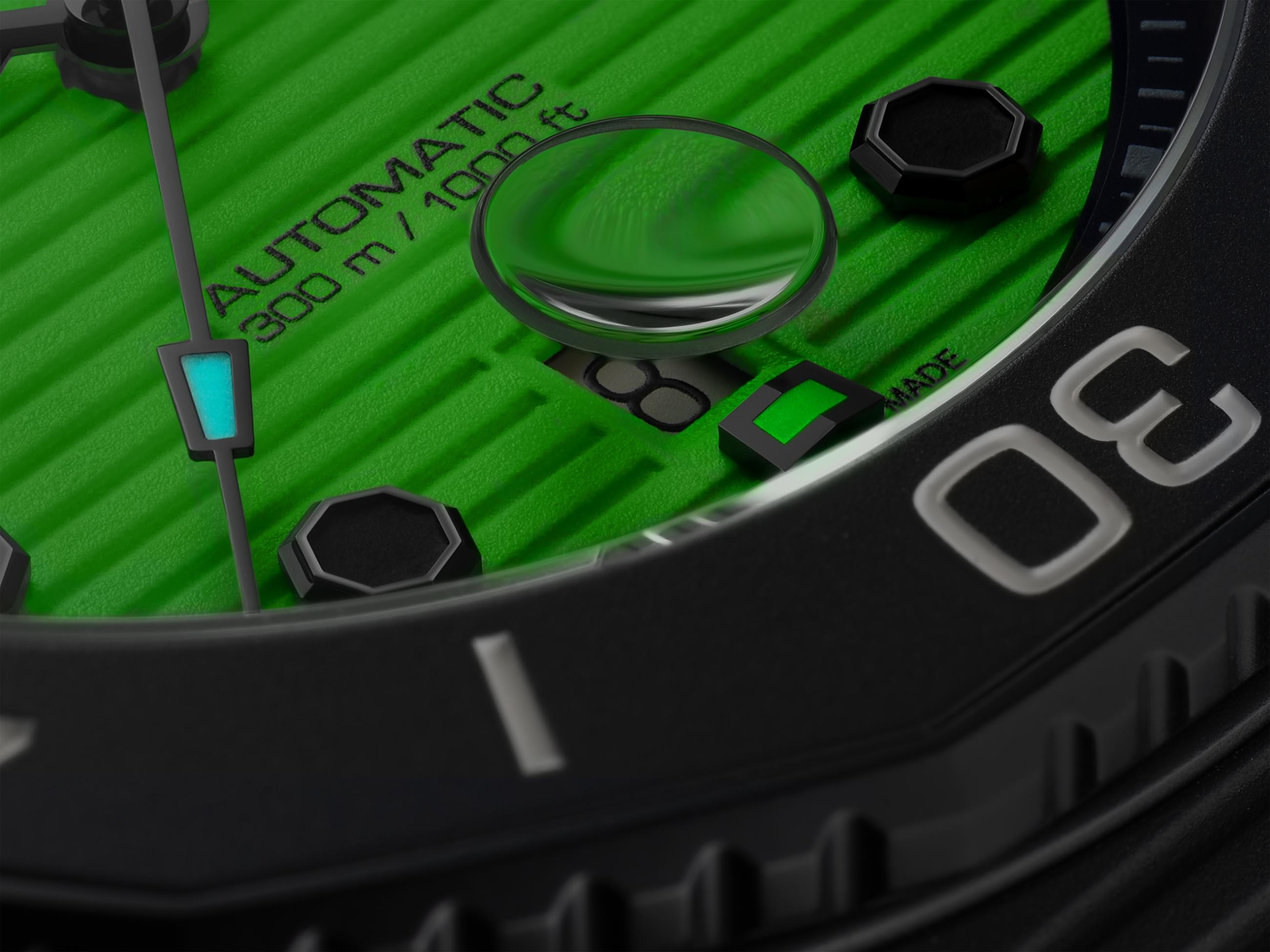