From cultural icons to great thinkers and leaders, the Montblanc Great Characters Limited Edition has been paying homage since 2009 to the exceptional individuals whose lives and work have made a lasting impact on human civilisation.

With its latest addition to the collection, Montblanc puts a spotlight on the ground-breaking work and cultural influence of one of the most famous music acts of all time, The Beatles. John Lennon, Paul McCartney, George Harrison and Ringo Starr formed their band in Liverpool, England and became widely regarded as one of the foremost and most influential acts of the rock era. With boundless creativity and a bold sense of innovation, the Beatles brought a new vision of music, disrupting the status quo and enchanting audiences around the world with music that ranged from rock and roll, to pop ballads and Indian music to psychedelia and hard rock. Beyond constantly reinventing their music, they invented long-form music videos, changed the format of live performances, and came up with new ideas of cover art and fashion. The influence and creativity that still enthrals music lovers over 50 years later has been captured in the design of the new Great Characters Limited Edition.

One of the earliest concept albums, “Sgt. Pepper’s Lonely Hearts Club Band” is also considered to be one of most important and influential rock and roll albums ever recorded. It is the design inspiration for The Great Characters, The Beatles Special Edition with its bright multi- coloured striped cap and barrel. The colours of the stripes from the Special Edition are taken from the uniforms The Beatles wear on the album cover. For the first time, Montblanc has developed a multi-colour stripe lacquering process that involves more than 10 different steps from treating the base metal before meticulously lacquering the five colours onto the metal tube in perfectly equal stripes before applying a transparent lacquer. In homage to their many recordings at the legendary Abbey Road studios, the shape of the cap top evokes a microphone and the cone resembles the button on the mixing table from the recording studio. The clip features four moustaches, a reference to the moustaches each Beatle wore in some of their most famous portraits. The Au750 solid gold nib is ruthenium coated and decorated with a fine engraving.

The Beatles were protagonists in a cultural revolution that turned pop culture upside down with new art, music and fashion. The Great Characters, The Beatles Limited Edition 1969 captures the magic of The Beatles era with symbols on the lacquered cap and barrel of the writing instrument associated with the iconic album “Abbey Road”. Alongside the peace symbol on the cap and the silhouette of The Beatles crossing Abbey Road, the metal inlay on the cap refers to the “LMW 28 IF” license plate of the VW that was depicted on the album’s cover. The Union Jack inlay on the barrel references the “Her Majesty” song featured on the record. The sophisticated inlay process requires the metal to be treated by etching, then bent to shape to the requested diameter then finally lacquered by hand with great precision. The moustache designed clip, the recording microphone cone and other fittings are ruthenium coated, creating a contrast with the white lacquer of the cap and barrel. The Montblanc emblem in black and white resin crowns this tribute to the music legends. The famous Apple logo used on so many historic vinyls was the inspiration for the pattern engraved on the handcrafted Au 750 solid gold, partly ruthenium-coated nib. 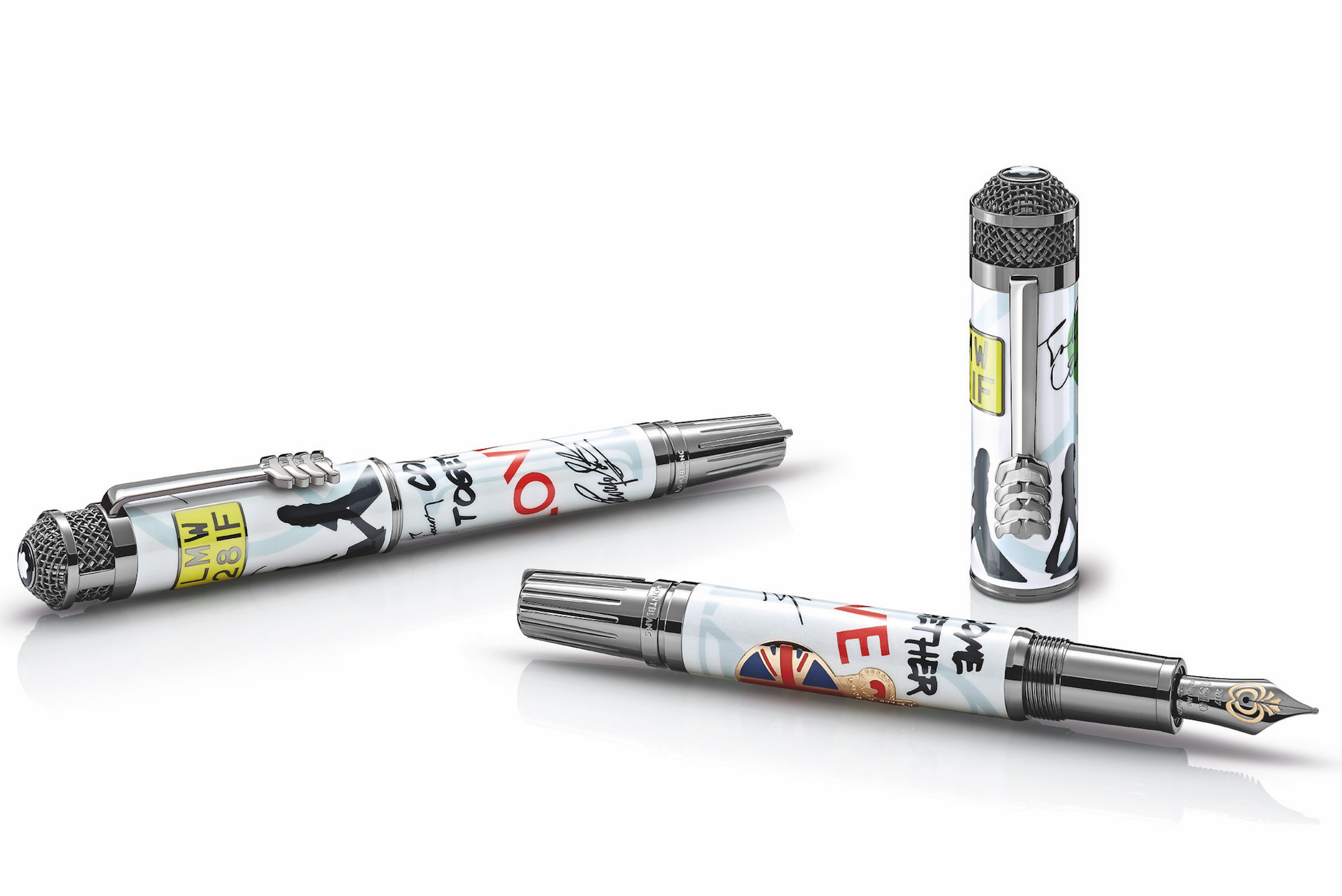 The product of the finest Montblanc craftsmanship, the elaborate Great Characters, The Beatles Limited Edition 88 features a solid gold skeletonized cap and barrel with several metal inlays adorned with lacquer. A feat of technical virtuosity, numerous intricate details can be seen on the surface of the overlay, with many inlays worked separately with filigree details before being assembled to create the skeleton. British culture and icons are the inspiration for the overlays on the cap from the Union Jack symbol to The Beatles’ signatures and portraits. “Yeah Yeah Yeah” refers to the front page of the Daily Mirror newspaper that printed the headline “Yeah Yeah USA” to announce the arrival of Beatlemania in USA in 1964. The same design detail is also reflected on the Au 750 Solid gold nib. The design of the barrel overlay includes the peace symbol, the Apple Records label as well as details from “Sgt. Pepper’s Lonely Hearts Club Band” album cover. The Montblanc emblem on the cap top, which is shaped like a microphone and the mixing table button that inspired the cone, is made from Au 750 solid gold. 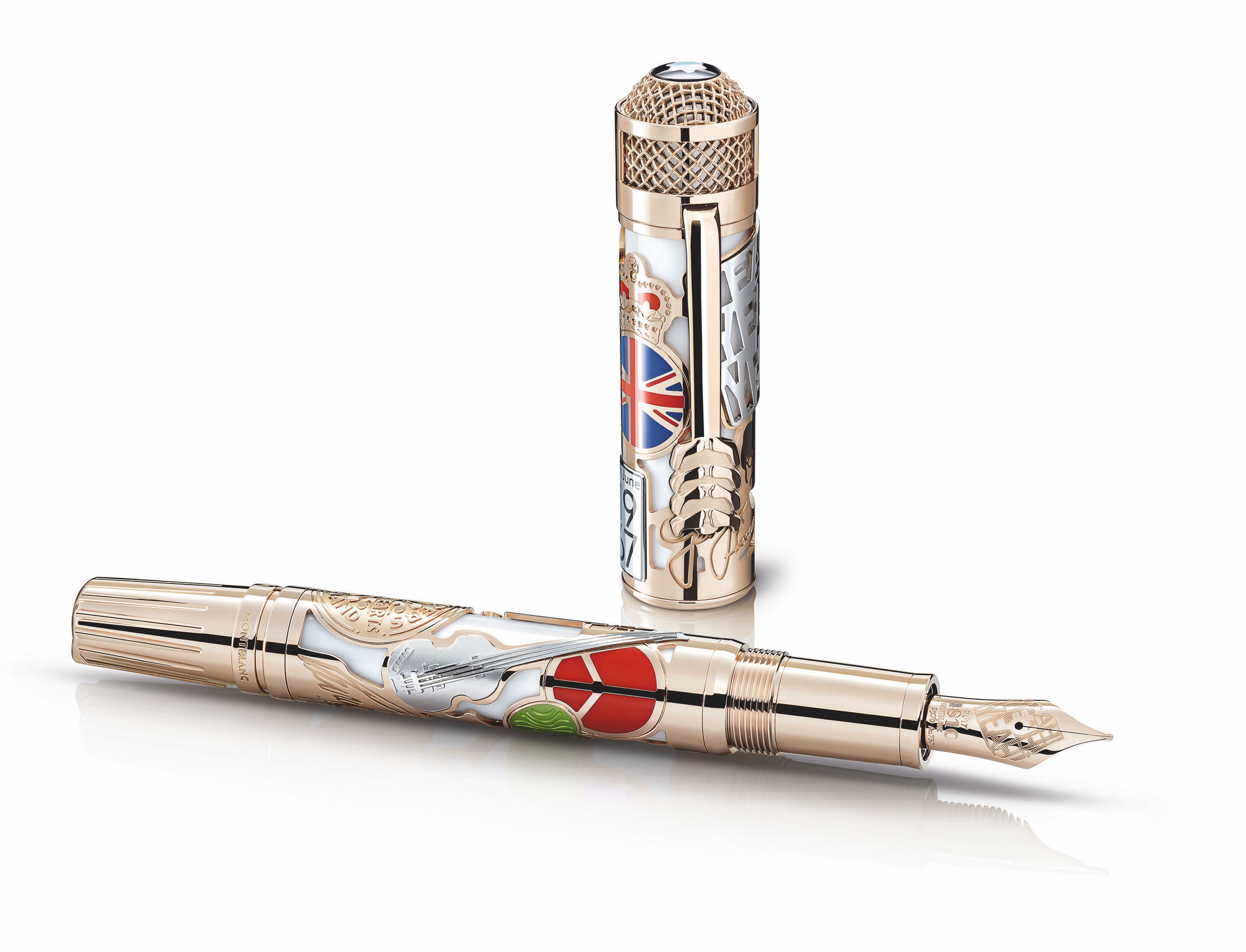 The Montblanc tribute to The Beatles also includes a special ink and refills edition in a new psychedelic purple colour inspired by the music style they pioneered. The ink is presented in special packaging that evokes the pop art colours of the 1960s. A special notebook completes The Beatles writing experience with a cover made of refined fabric that draws inspiration from the cover of “Sgt. Pepper’s Lonely Hearts Club Band” and features the silhouettes of the four Beatles. 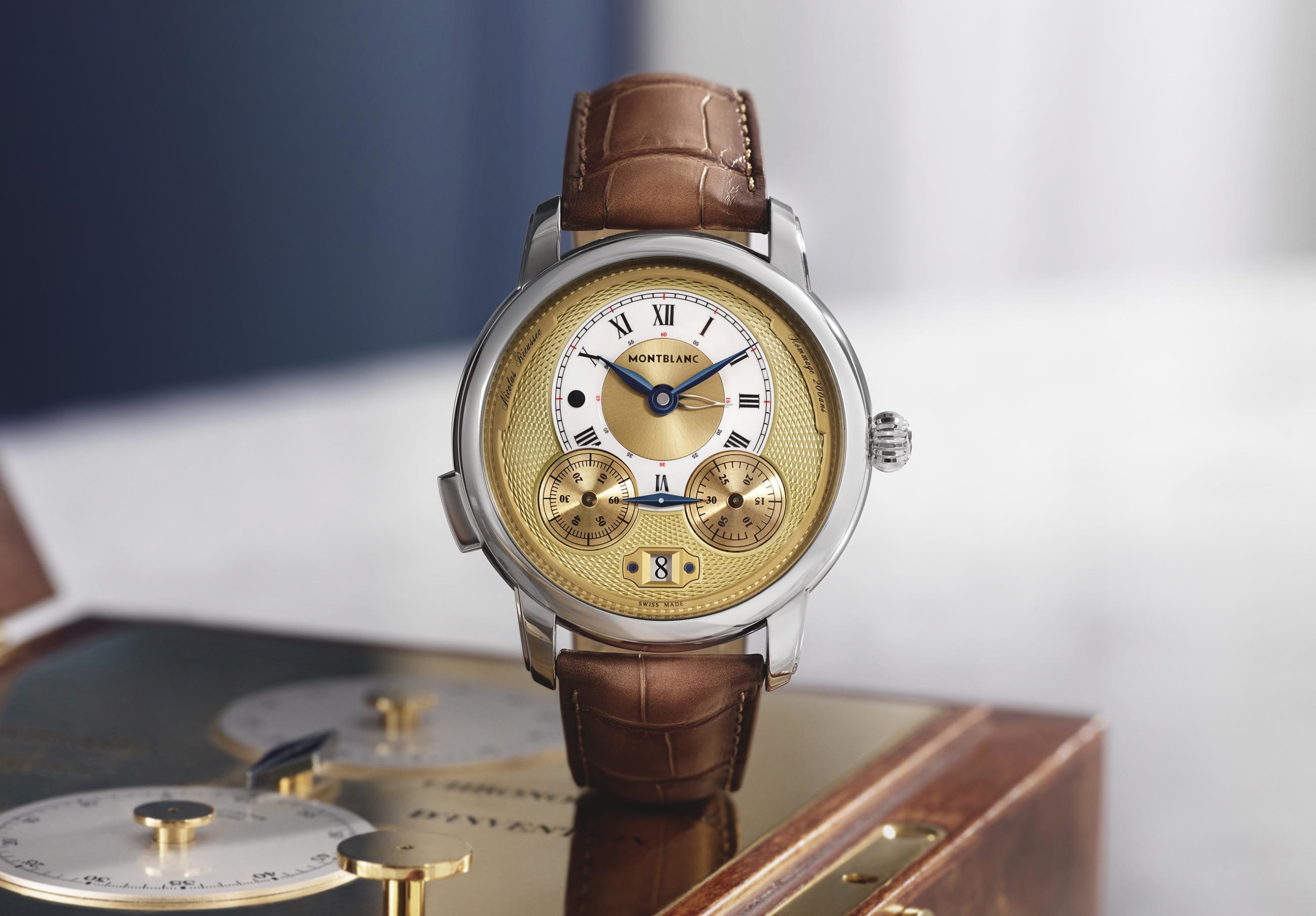 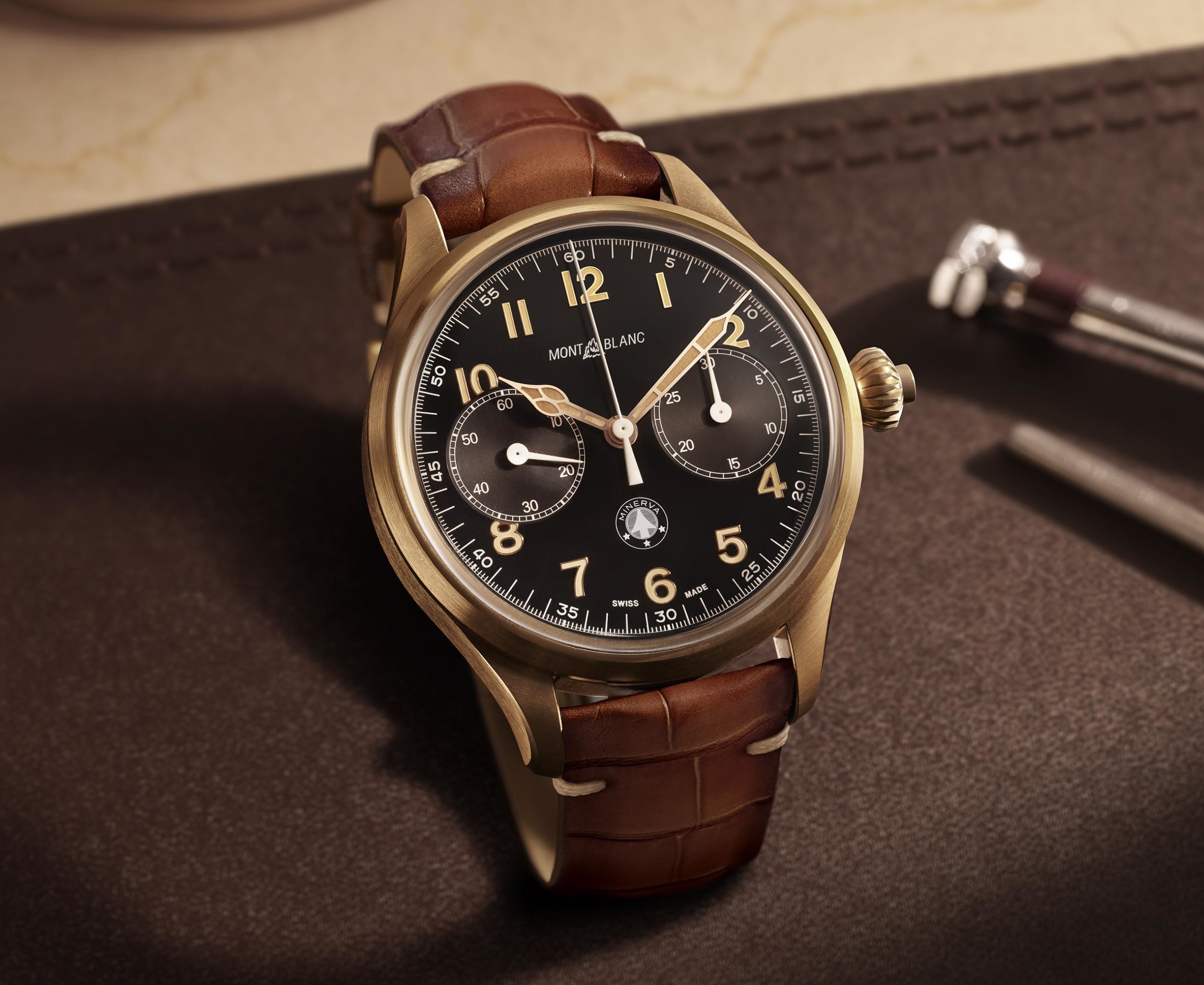 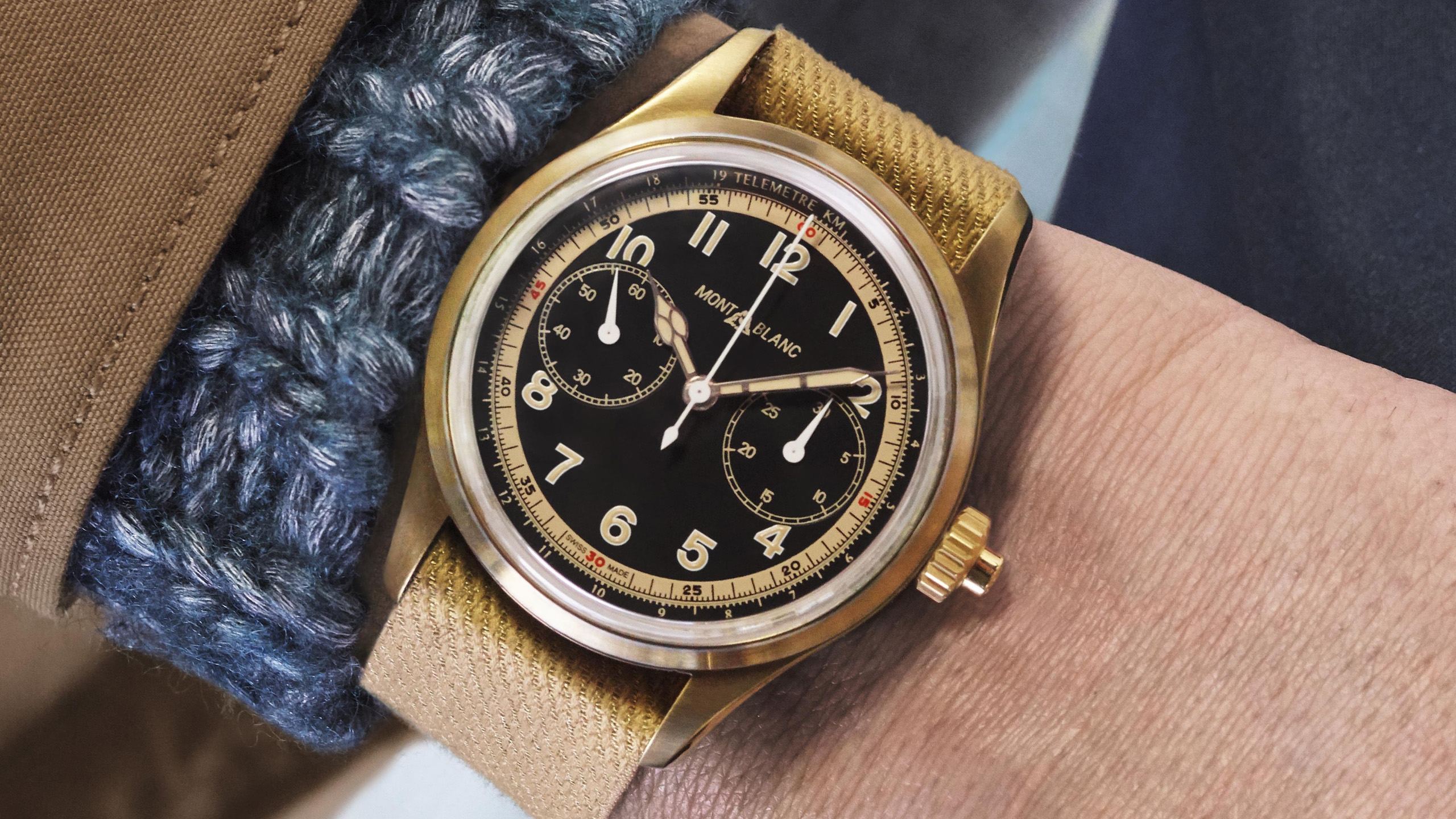