On the wrists of Wayde van Niekerk and Mutaz Essa Barshim during the World Championships in Athletics at the Olympic stadium in London, the public will have an opportunity to discover the new creations from Richard Mille, the RM 67-02 Sprint and the RM 67-02 High Jump, both sports versions of the RM 67-01. 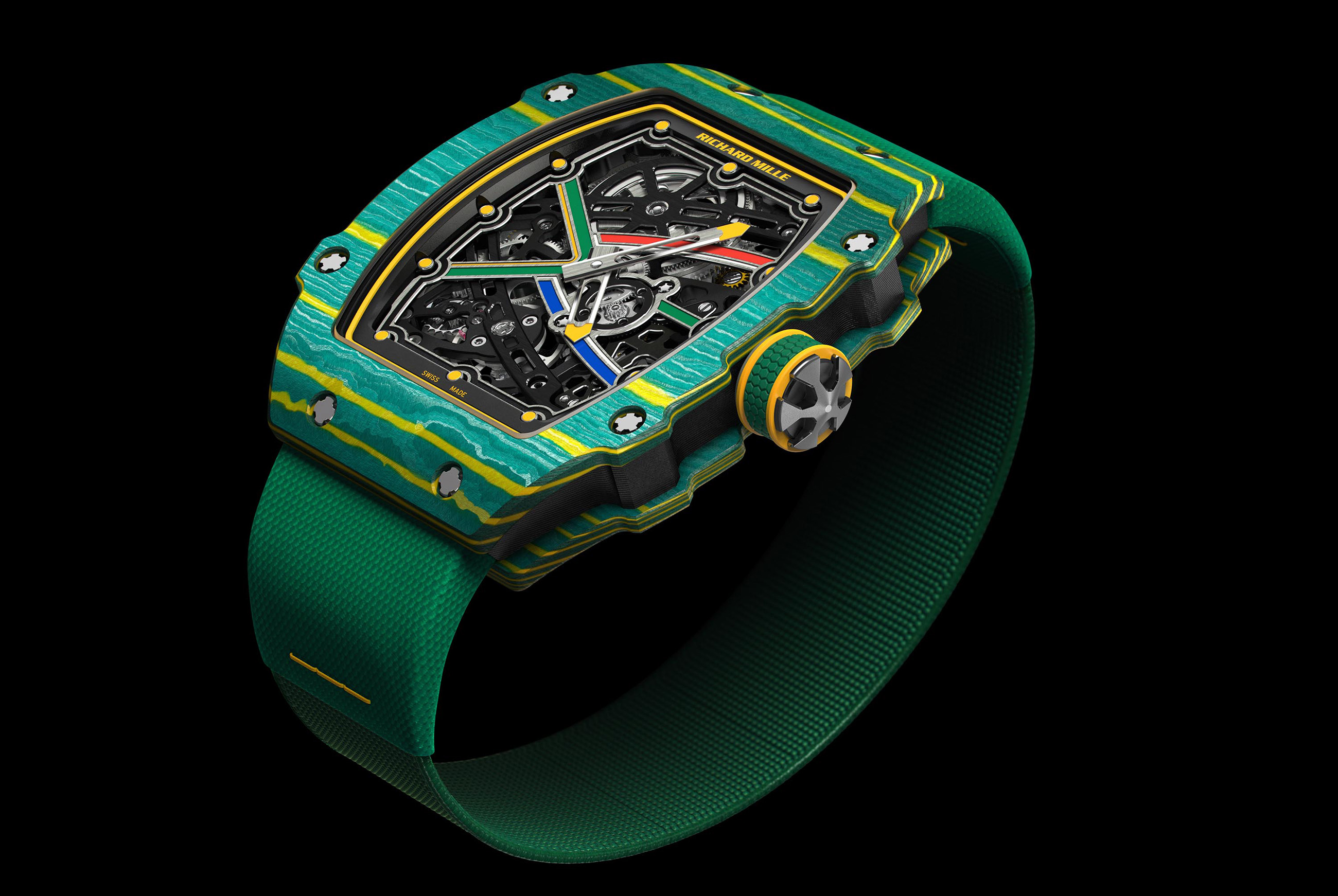 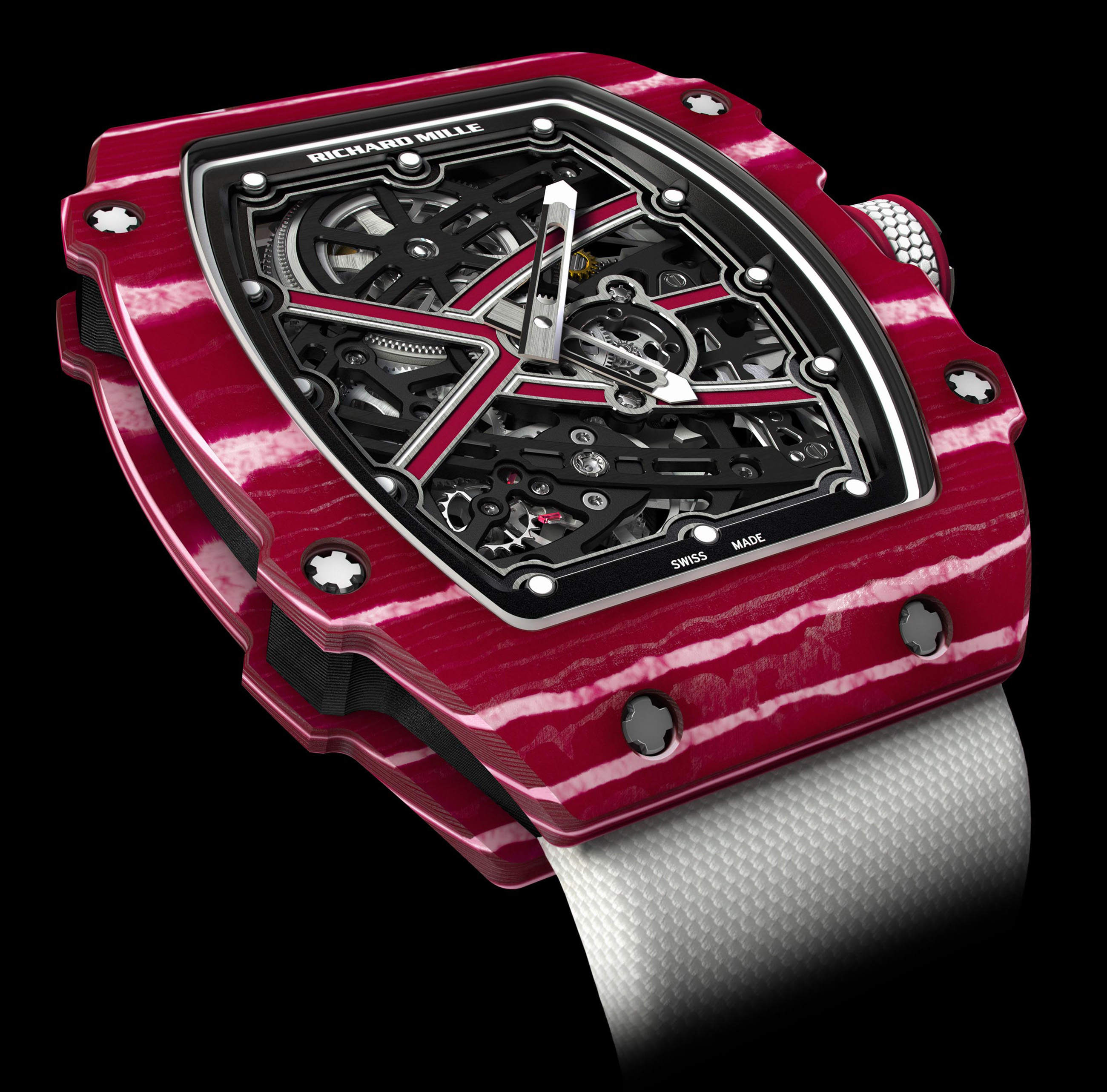 Olympic Gold medallist and world-record holder for the 300 and 400 metres, the pluridisciplinary athlete Wayde van Niekerk is the only sprinter to have run the 100 metres in under 10 seconds, the 200 metres in less than 20 seconds, the 300 metres in less than 31 seconds , and the 400 metres in under 44 seconds. He will be joined by the new Richard Mille partner, Mutaz Essa Barshim, Mr. High Jump himself. An Olympic medallist twice over, the native of Doha has turned in the four best performances worldwide in the last ve years, proving he has everything it takes to become this discipline’s new record holder, twenty-four years after Javier Sotomayor.

The desire to create a watch that was so uniquely adapted it was practically a second skin for the athlete, permitting a sort of ‘symbiosis’ with the athlete was the guiding ambition that propelled this new development. Starting with the idea of lending a sporty feel to the RM 67-01, whose lightness, thinness and ergonomics made it a perfect candidate, the Richard Mille teams reworked its lines to highlight its athletic qualities. The incorporation of 4 extensions, in addition to being a hallmark of the brand’s sports watches, contributes to reinforcing the case structure.

The case is crafted in Carbon TPT® and Quartz TPT®, composite materials exclusive to Richard Mille possessing exceptional shock resistance. The slimness of the 7.8 mm bezel/caseband/caseback assembly in no way reduces its physical properties, nor its ability to handle any situation that might occur while engaging in high-level sports.

The secret of Quartz TPT® lies in its layering of silica laments with a maximum diameter of 40 microns. These are assembled by a dedicated machine that modi es the bres’ orientation by 45° at each layer, then impregnated with three newly developed coloured resins: crimson for the RM 67-02 High Jump associated with Mutaz, who is Qatari, and two—yellow and green—used in the 67-02 Sprint, for Wayde’s native South Africa. The Carbon TPT® employed for the caseband is produced according to the same process, but using carbon fibres.

The tight, taut lines of the rotor, crafted of Carbon TPT® and white gold, the bridges and the DLC- coated grade 5 titanium baseplate of the new in-house extra at CRMA7 calibre sharply underscore the sporty quality of this timepiece. The at least two hours of machining time required to achieve such extreme skeletonisation of the baseplate are themselves made possible by hundreds of hours devoted to programming and adjusting specialised machinery.

The going train, optimised by adoption of an involute pro ling of gears that produces a 20° angle of pressure, ensures excellent transmission of power to the barrel thanks to its variable-inertia balance, thus guaranteeing constant performance for 50 hours.

With its satin- nished, bevelled hands and sharp lines, the calibre CRMA7 actively conveys a sense of power and strength. The dial, whose lines echo those of the movement, is machined from a sheet of titanium only four tenths of a millimetre thick. Treated with a black DLC coating, it is then painted by hand in the colours of each athlete’s flag.

For superlative wearing enjoyment of the RM 67-02, Richard Mille has equipped these timepieces with their new comfort strap. Entirely seamless and non-slip, the strap is highly elastic, allowing it to perfectly t the contours of each wrist, adapting to individual morphology. As the lightest strap the brand has ever created, it has helped lighten the RM 67-02 to just 32 grams. This makes the RM 67-02 the lightest automatic watch of the Richard Mille collection.

Mutaz, Wayde and Yohan Blake will be outstanding representatives of Richard Mille in London. We offer them our full support in the upcoming world championships, and wish them an exceptional competition. 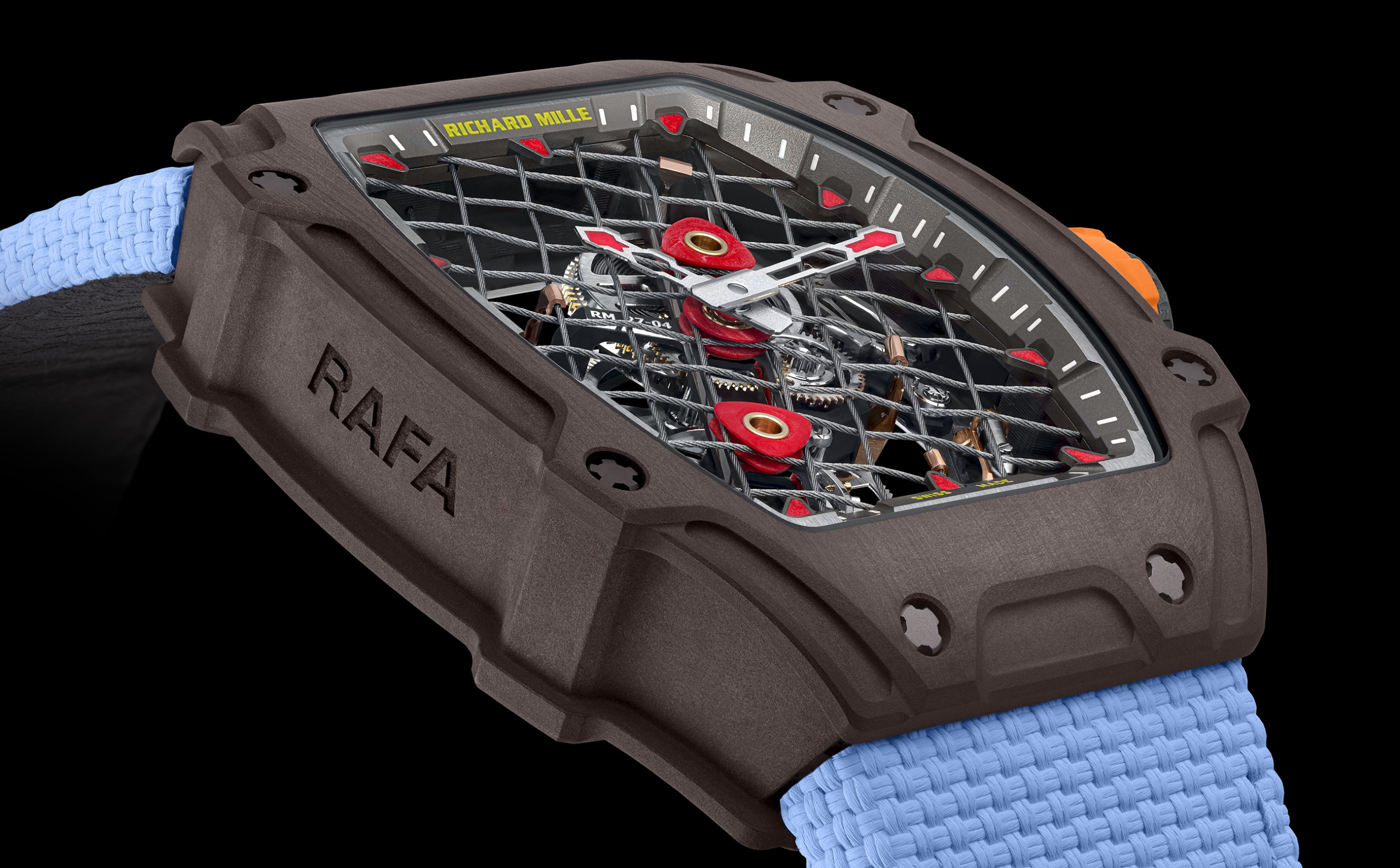 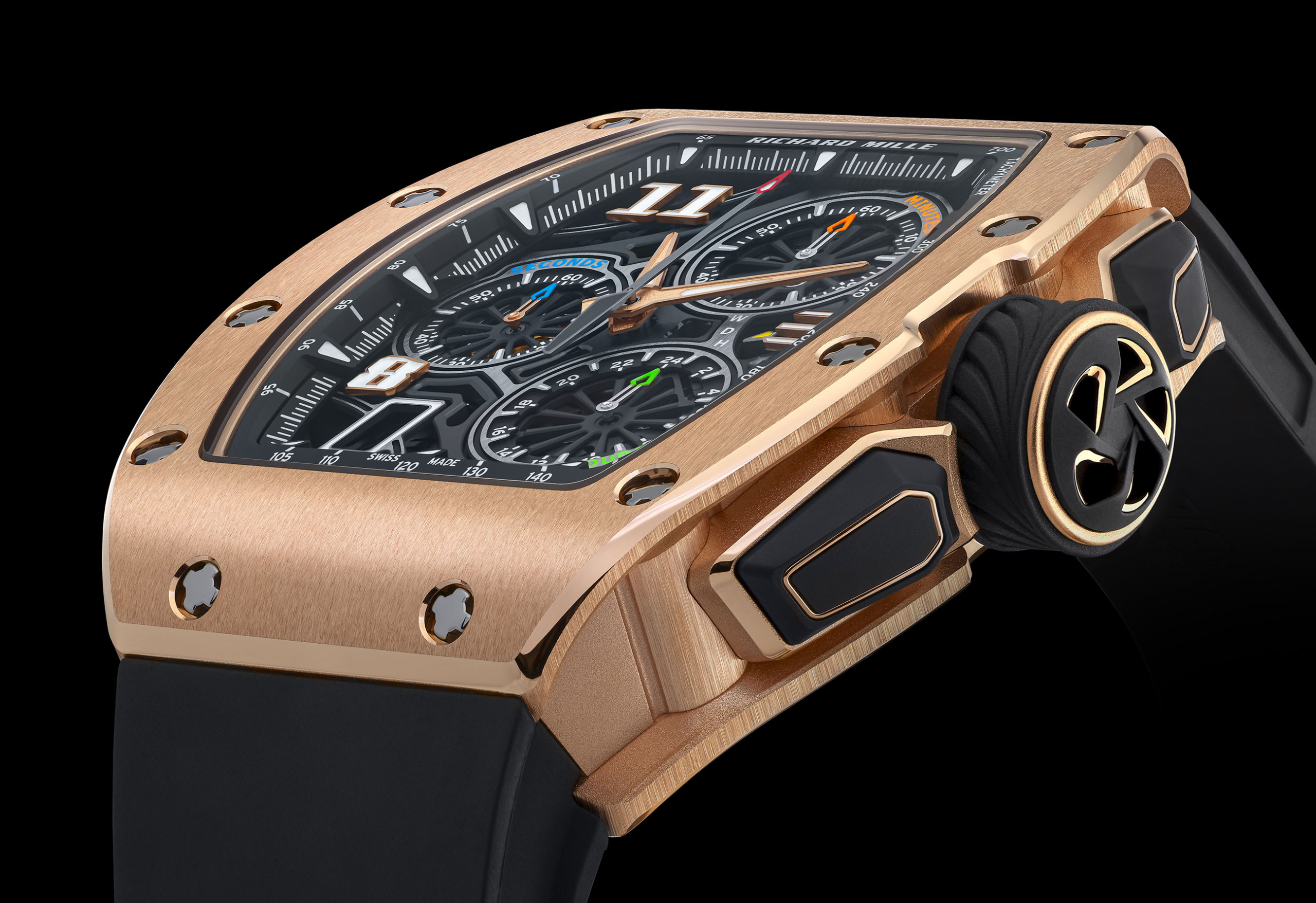 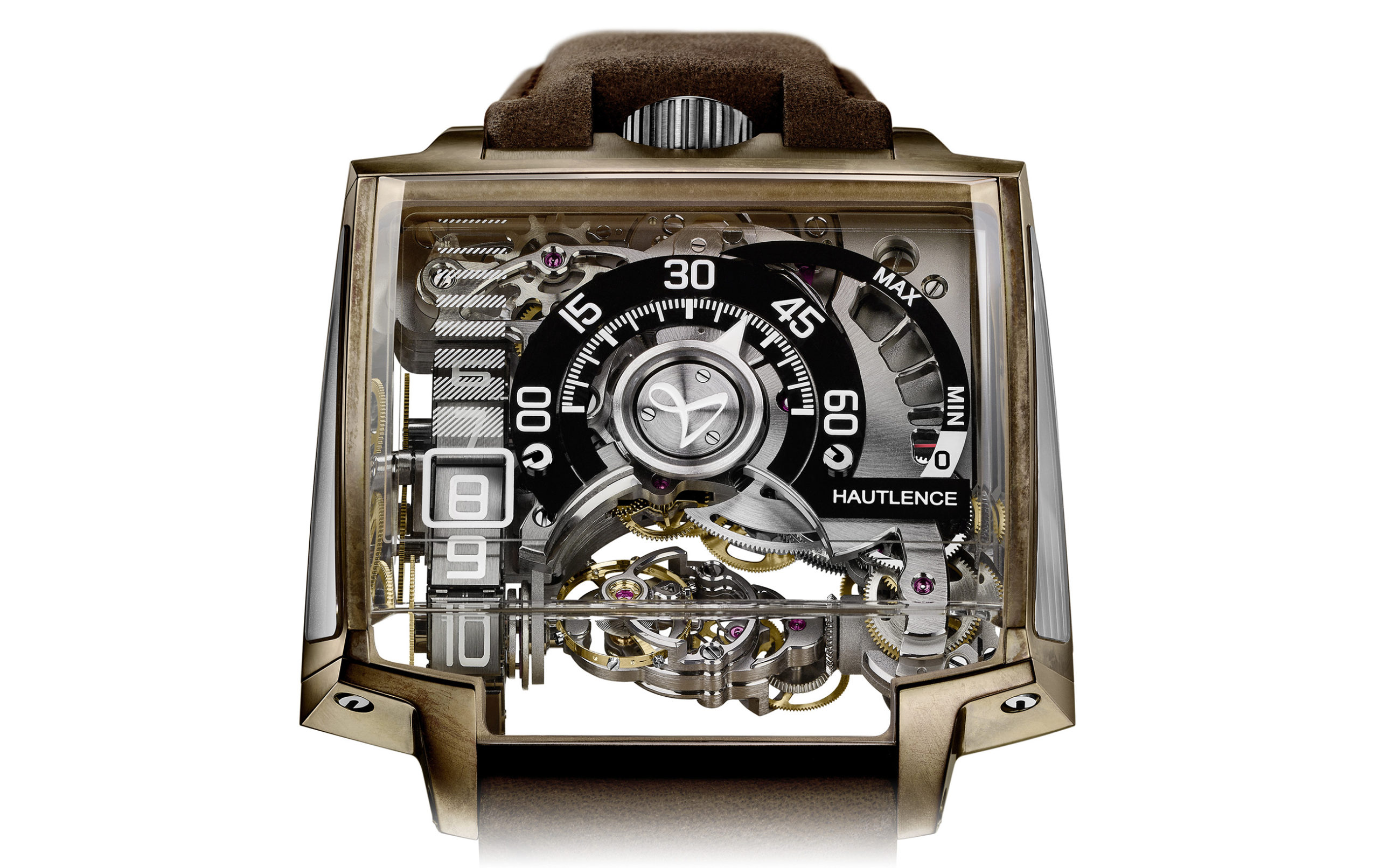